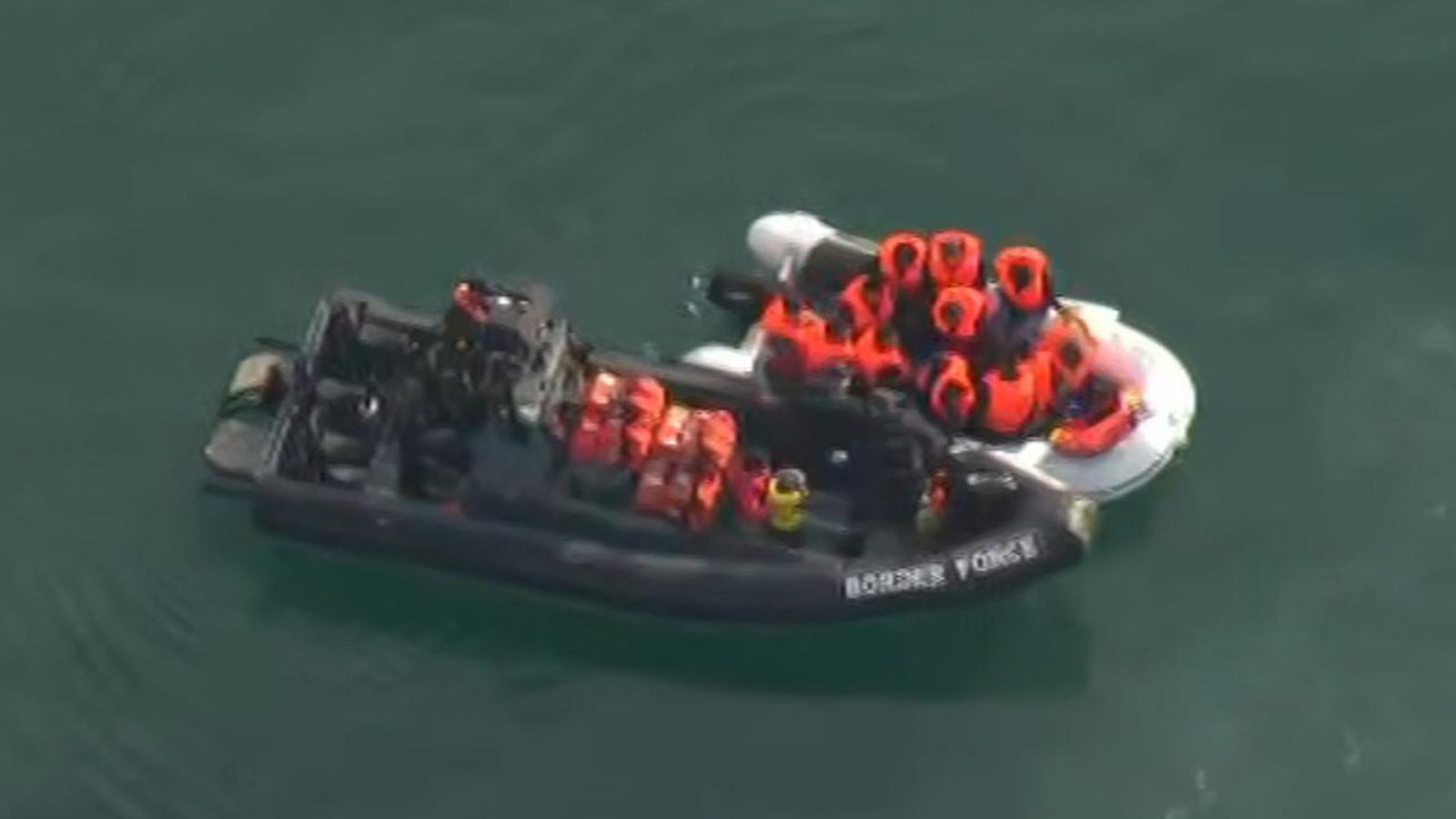 The UK is demanding that France crack down on migrants crossing the Channel, amid government plans to make the route “unviable”.

Sky News filmed on Saturday morning as another dinghy was intercepted by a Border Force patrol vessel, with there having already been record-breaking numbers of migrants arriving in the UK on small boats in the last few days.

Recent calmer weather in the Channel area has prompted a surge in people making the journey. It is understood that there were 12 individuals on board the dinghy seen on Saturday.

Sky News has also been told there is another vessel in the Channel with 19 people on board.

“We’re talking to French ministers about preventing people leaving France in the first place, and then finding other ways of making sure that we return boats to France when they’re trying to make what is a very dangerous crossing,” said Mr Gibb.

But government plans to “push back” migrant boats were criticised.

Former Labour home and foreign secretary Jack Straw told BBC Radio 4: “I don’t think that just trying to push these people back is going to work and it will only take one of these dinghies to capsize and everybody to drown, which is perfectly feasible, for there to be a hullabaloo, including in the Conservative Party, and for the policy to have to be reversed, so I wouldn’t go down that route.”

Britain wants Paris to intervene to stop small vessels heading to England and take them back to French ports, rather than shepherding them onward until they reach British waters.

Immigration minister Chris Philp will meet his counterparts from France next week as he seeks to eventually shut down the Calais-to-Britain route.

He also wants migrants caught trying to cross the Channel to be fingerprinted and face “real consequences”.

Mr Gibb’s comments came after Kent County Council (KCC) said that 400 migrant children had been taken into its care this year, including 60 in the first week of August, with 23 arriving on Friday alone.

KCC leader Roger Gough discussed the issue on the BBC’s Newsnight programme, saying “enormous pressure” was being put on the authority amid rising numbers of unaccompanied young migrants arriving in the UK.

“We’ve had so far some 400 of these young people come into our care this year and in recent weeks and months it has been particularly rapid,” he said.

Mr Philp has said some of the measures he would like to see brought in include migrants being deported or being taken into custody for breaking the law.

The Home Office has said it is possible the Royal Navy might be brought in to patrol the Channel’s migrant traffic – a move described as “completely potty” by a Ministry of Defence source.

The proposals reflect growing frustration in government after nearly two years of rising numbers of migrants arriving by sea from France.

Mr Gibb added: “It’s not a simple situation, nor is there a simple solution. There are legal barriers and complexities in dealing with this… issue, which is why the home secretary, Priti Patel, has been talking to her French counterparts, and why Chris Philp will also be doing the same next week.

“These aren’t simple issues. They are complicated. We’re working through them. But we’re determined to address what is a complex issue. We don’t want people making that very dangerous crossing across the English Channel, even in weather like we have at the moment.

“We are out of Europe, but we have friendly relations with our partners in Europe, with France and so on. And those negotiations are happening between ministers at the moment. And we want to try and deal with this issue.

“I don’t think whether we’re in the European Union or not will make any difference to this issue… We are determined to stop this illegal route into Britain, for humanitarian reasons as much as anything else.

“We are talking to our French counterparts… in order to find a solution using maritime assets, as they call it, to try and return boats to France.”