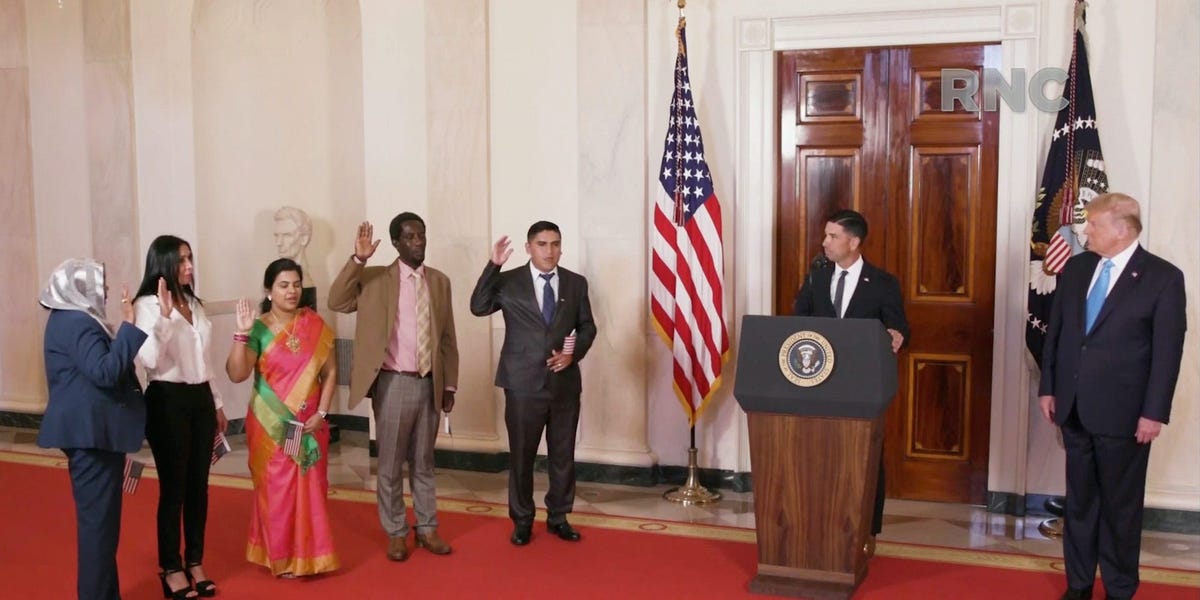 President Donald Trump presided over a citizenship ceremony and used the images of the five individuals taking their oath in the Republican National Convention, without informing them, the Wall Street Journal reported.

While Trump praised the “incredible” new citizens his administration has repeatedly focused on anti-immigration policies.

Trump has consistently introduced policies that ban people from certain countries. One of the immigrants at the RNC ceremony was from Sudan, a country that was on the list of nations in the 2017 travel ban that targeted predominantly Muslim countries such as Iran, Iraq, Libya, Somalia, Sudan, Syria, and Yemen. The ban followed Trump’s 2016 campaign promise for a “total and complete shutdown of Muslims entering the United States.”

The ban was revised several times to limit some broad restrictions, but a version of it that excluded Iraq was upheld by the US Supreme Court.

Earlier this year, Trump announced an extension to the ban to bar immigrants and travelers with certain visas from countries including Belarus, Myanmar (also known as Burma), Eritrea, Kyrgyzstan, Nigeria, Sudan, and Tanzania from entering the US.

Trump has also made offensive remarks about other countries. In 2018, during a meeting with lawmakers, Trump expressed frustration about offering protections to immigrants from Haiti, El Salvador, and Africa. “Why are we having all these people from shithole countries come here?” he reportedly said.

Another of the immigrants at yesterday’s ceremony was from Ghana.

In June, he extended a proclamation to freeze work visas put in place in April during the coronavirus pandemic. Visas like H-1B, H-2B, H-4, J-1, and L-1 visas were halted under the order, impacting a wide array of professions.

Many industries including the tech industry opposed the ban.

Trump has also cracked down on migrants at the border and ran in the 2016 election on a promise to build a wall on the border with Mexico to keep “bad” immigrants out of the country.

He has claimed that Mexico was “sending people that have lots of problems” to the US, including “rapists” and people who are “bringing crime” and “bringing drugs.”

While two of the five new citizens Sudha Narayanan and Neimat Awadelseid told WSJ that they didn’t mind being featured and were celebrating their citizenship, they said they were never told why the ceremony was being held in the White House or that it would be featured during the RNC.

“He’s exploiting these people at a ceremony that is sacred and fundamental to what makes this country great,” Tim Miller, the political director for Republican Voters Against Trump told WSJ. “He’s using them in the most cynical and dishonest way. His own policies would cut refugee admissions and asylum status, making it hard for these naturalization ceremonies to happen.”

How to vote early in the 2020 presidential election