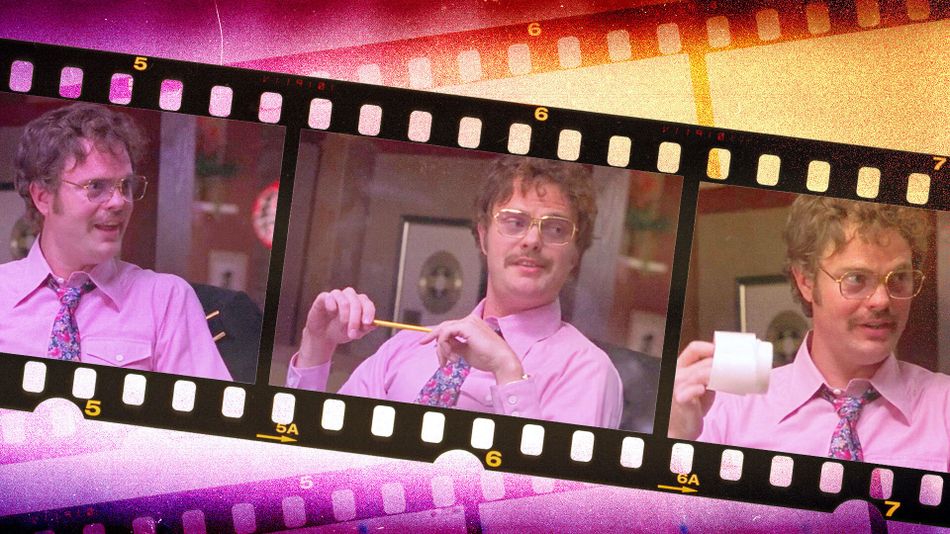 Popcorn in hand, I sat down this past week to watch Almost Famous in honor of the 20 year anniversary of its release. And once again, my favorite part was one that everyone overlooks: The preening, posing, pompous magazine editor played by Rainn Wilson.

It’s easy to see why many don’t notice him. The story of Almost Famous is really about aspiring rock writer William Miller, played by Patrick Fugit, and his quest to work at Rolling Stone. It is packed with classic moments you want to see again, like the “Tiny Dancer” sing-a-long and Russell’s “I am a Golden God!” speech. And it has bits you’ve never noticed before, like the intentional in the credits, the as The Eagles’ road manager, and the in a scene set two years before that album came out.

“Dwight Schrute was in Almost Famous?” you might ask. Oh yes, dear reader, he most certainly was.

I would know. For years, I’ve watched and re-watched Almost Famous with the fervor of a wannabe Band-Aid, the pulled up on my phone and an endless supply of fan think pieces on my laptop. And while I can’t remember the precise rewatch I was on when it clicked that Rainn Wilson absolutely rocks in this film, I can promise you it was long before I knew (or cared) about that little NBC show called The Office.

“Dwight Schrute was in Almost Famous?” you might ask. Oh yes, dear reader, he most certainly was. It was at the very beginning of his career. Technically, Wilson’s big screen debut came as an alien in Dean Parisot’s in 1999, released the Christmas before Almost Famous. But his part in Cameron Crowe’s Oscar-winning classic was filmed first, making it Wilson’s movie debut and one of his best parts to date.

In Almost Famous, Wilson plays David Felton, a real editor and writer at Rolling Stone in the ’70s. Ffor a time, he was even writer-director Cameron Crowe’s boss when Crowe worked for the magazine in his teens. Felton is perhaps best known for his (done with fellow Rolling Stone titan David Dalton) and his generally spoof-able demeanor. With a mustache the size of a push broom and a bucket of curly hair, ’70s Felton embodied the world Almost Famous sought to capture — a vestige of what was once cool, turned cringeworthy.

There are three things that make Wilson’s performance as Felton (which, all told, accounts for less than five minutes of Almost Famous‘s 122-minute runtime) spectacular.

First, there is the sizzling talent that is Rainn Wilson.

Watched out of context, Wilson’s interpretation of Felton plays very much like what might have happened if Dwight Schrute were cast in a ‘70s-era exploitation film. When editor Ben Fong-Torres (another ) discusses a pay rate with William over the phone, Wilson’s Felton eavesdrops on the call and mimes his way through the negotiations with scene-stealing perfection. The over-exaggerated thumbs down, the pearl-clutching reaction to the young reporter’s mom picking up the phone — all of it has the fervor of “!”

In a later moment, Wilson steals the show again with a laugh-out-loud pronouncement that William’s long-awaited exposé is little more than “a puff piece.” It is a gem in a film full of shining moments. It’s no wonder Crowe originally gave Wilson a lengthy scene between Felton and the protagonist — which included a “wise and valuable lecture on the meaning of art and life” — before it was cut, as revealed in Wilson’s 2015 autobiography The Bassoon King. Wilson called the edit “heartbreaking.” Agreed.

There are no small parts

Second, there is the phenomenal authenticity Wilson breathes into the role of Felton. With only a handful of lines, Wilson still speaks volumes to the environment at Rolling Stone as recreated by Crowe. His posture, reactions, and presence exude a kind of “trying too hard to not try at all” vibe that drives home the drug-laced insecurity of rock n’ roll’s heyday.

What’s more, David Felton isn’t the easiest guy to learn about in 2020 (here’s the I could find), and I can’t imagine it was much easier for Wilson to research him as an up-and-coming actor in the late ’90s. Sure, Wilson probably had some help from Crowe, but the effort Wilson put into understanding Felton as he existed in the time period of Almost Famous is palpable. This is what it looks like when an actor truly labors at his craft, and the struggle pays off. Wilson’s Felton feels real.

Of course, not many who know Felton directly have spoken about the accuracy of Wilson’s portrayal. But in her memoir The Only Girl: My Life and Times on the Masthead of Rolling Stone, reporter-turned-producer Robin Green referenced Wilson’s portrayal of Felton specifically. Green called Wilson’s version of Felton “ditzy,” but used his performance to anchor her own description of Felton and explain why she fell in love with and dated him for a time.

Finally, there is the magic of what’s really happening: An unknown actor launching his cinematic career in a movie titled Almost Famous, and then going on to become truly famous. Does it get any better than that?

In the same way Penny Lane claimed to follow Stillwater for the music more than for the rock stars, Wilson exemplified the best of acting when he played David Felton. He took big swings, did a lot with a little, and made his own mark on a movie so culturally colossal even writing about it 20 years later made me anxious.

That Wilson came out of his small part in Almost Famous to become a comedy icon is wonderful. That I couldn’t get him on the phone to discuss it, despite reaching out to his representatives in a myriad of ways, is somehow better.

Don’t get me wrong, I’d still love to talk with Wilson about his role in one of the best movies ever. But somehow it restores my faith in the whole entertainment industry to think he was once effectively told, “Go to the top of the ramp with the other girls.” And now, Wilson is center-stage and it’s all happening.

‘The Golden Girls’ 35th anniversary: How to celebrate