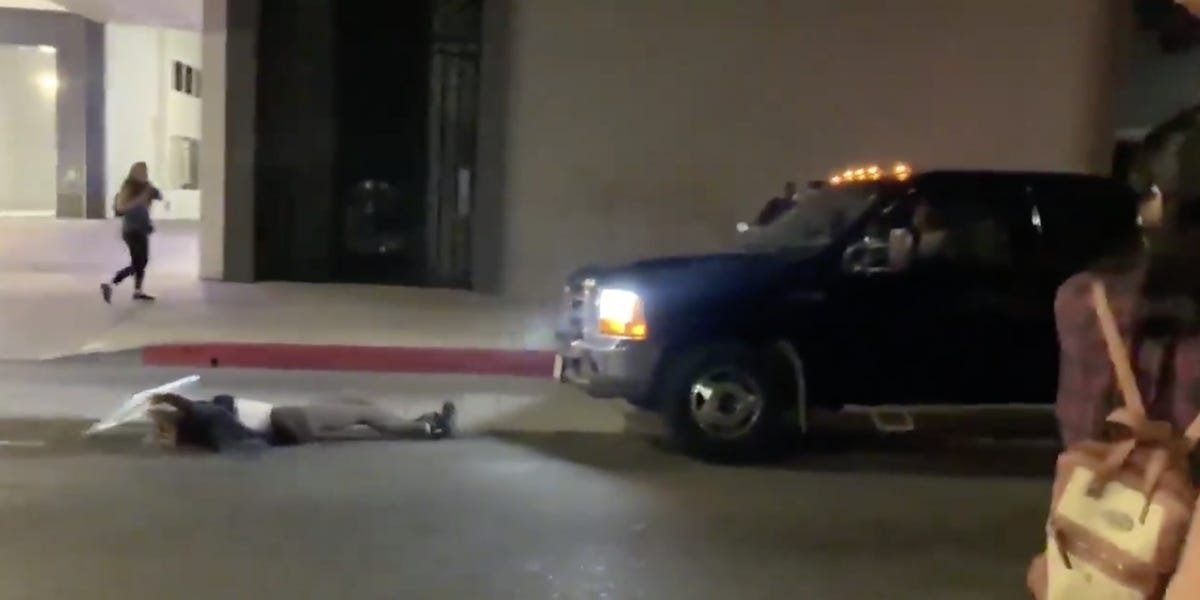 A pickup truck drove into a protester on Sunset Boulevard on Thursday night, knocking the person to the ground as they participated in a march decrying the decision not to charge police for killing Breonna Taylor.

It was the first of two incidents between protesters and vehicles in LA that night.

Protests have struck up nationwide in reaction to Wednesday’s verdict, which did not indict any of the three officers for the killing of the 26-year-old Black woman in March. Taylor was shot five times during a botched drugs raid.

The only indictment resulting from the killing was for an officer who shot into a neighbor’s apartment.

A largely peaceful protest of around 300 people began in Hollywood, Los Angeles on Thursday evening, according to Los Angeles Police Department.

Just after 9pm, a dark blue pickup truck drove through a crowd walking down Sunset Boulevard and hit one protester, knocking them flat and then appearing to run them over.

Viewers may find footage of the incident, which was posted to Twitter, disturbing.

The protester was taken to the hospital with minor injuries, according to the LAPD.

Police stopped and spoke to the driver, who said that protesters had first attacked his car, according to the LA Times.

Police noted damage to the car, the paper reported. But according to local news channel CBSLA, officers let the driver go after questioning.

The LAPD said in a statement that an investigation is ongoing and did not confirm if anyone was arrested.

It was not the only incident between cars and protesters on that night, according to multiple sources.

Ten minutes later, a white Toyota Prius attempted to maneuver through the edges of the same protest at a nearby intersection, CBSLA reported.

Helicopter footage shows the car forcibly moving a protester out of the way, as others approach and hit it with their hands. It then shows a black pickup truck — which had been leading the protests — give chase, overtaking the Prius and stopping in front of it.

In the footage, people can be seen attacking the Prius and trying to drag the driver out. The car then attempted to reverse, hitting a green Mustang — also part of the protest — behind it, according to LAPD.

AOC says if Biden is elected he should appoint progressive leaders

AOC says if Biden is elected he should appoint progressive leaders