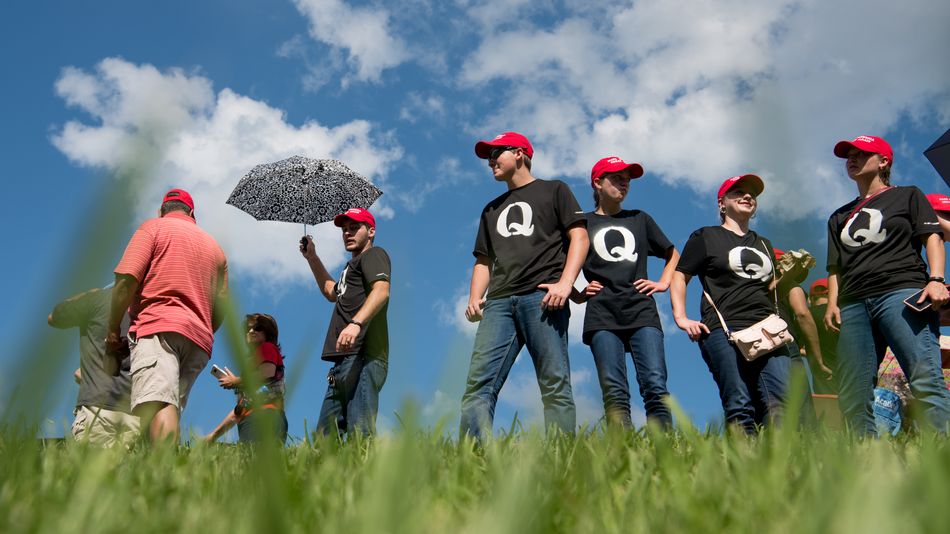 Hundreds of thousands of advocates of the QAnon conspiracy theory are going to have to find a new online hangout.

The second largest QAnon group on Facebook has been from the platform, the social network announced Thursday. The group, called “Official Q/Qanon,” had nearly 200,000 members at the time of its removal. Facebook said it took the page down on Tuesday.

A Facebook spokesperson told that the group was banned over posts that repeatedly broke the platform’s rules on misinformation, harassment, and hate speech.

journalist Shayan Sardarizadeh that the “Official Q/Qanon” group received more than 10 million engagements across 500,000 posts during the first 7 months of 2020. The group spiked in membership in early March, just as the full-force of the coronavirus pandemic began to hit the United States.

Look at how page likes went up after Covid hit. There’s only one other QAnon Facebook group with more likes (215,000) and that one’s still up. I just quickly had a look at the other BIG QAnon groups/pages and they’re all still there; at least for now! Analysis via @crowdtangle pic.twitter.com/FnnQQXijtJ

The former members of that group won’t have to look far for a new online home for their conspiracy theories, however. There are still plenty of Facebook groups dedicated to QAnon on the platform, including one even bigger than the banned group, with more than 215,000 members. In its latest action, Facebook did not address other QAnon groups or content on its platform.

In May, Facebook a network of QAnon pages, groups, and profiles for coordinated inauthentic behavior, its term for users who create multiple fake accounts to game its engagement algorithm. The removals marked the first time the social media company took action against accounts related to the conspiracy theory.

Other social media platforms have taken even more serious approaches when it comes to QAnon.

Celebrities such as Chrissy Tiegen have of coordinated mass online from QAnon believers.

is a far-right-wing conspiracy theory. Its believe that is secretly working to take down a global child-trafficking ring run by satanic pedophiles in Hollywood and the Democratic Party. Various other conspiracy theories have been rolled into QAnon, such as fringe elements from the anti-vaccine communities.

The conspiracy began in 2017 when an anonymous internet user going by the name “Q” began posting on 4Chan about a secret plot by the supposed “deep state” to take down President Trump. Conspiracy theorists believe that Q is an individual close to Trump and the conspiracy has continued to grow regardless of the fact that all of Q’s predictions have been .