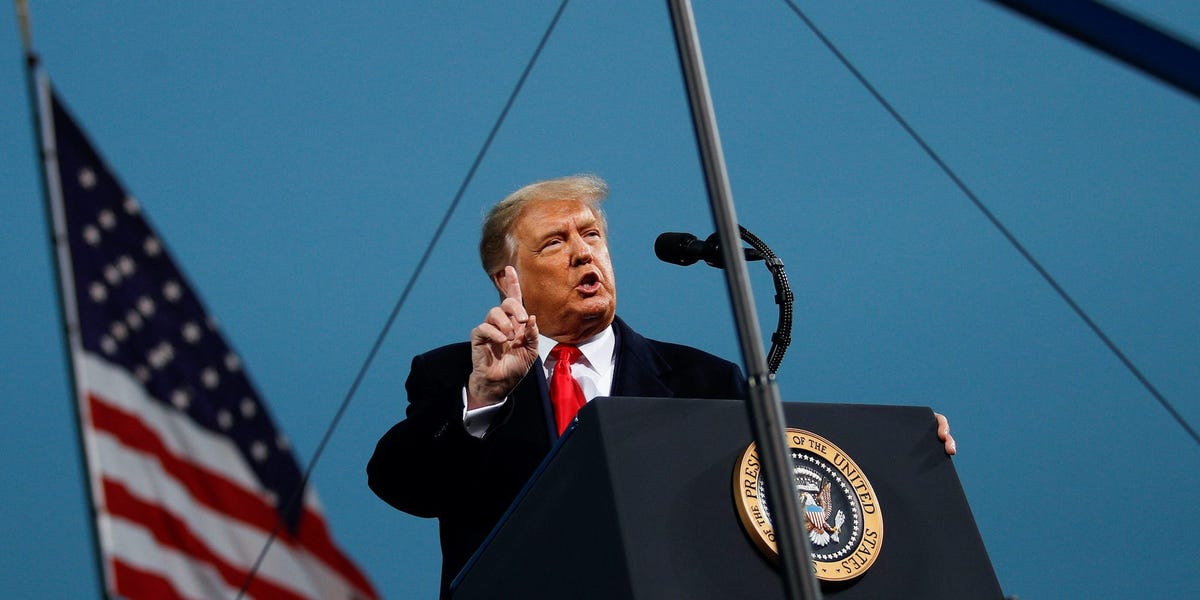 President Donald Trump on Monday suggested that Ruth Bader Ginsburg’s dying wish, reportedly dictated to her granddaughter, that her Supreme Court seat not be filled until a new president is elected “came out of the wind” and was made up by Democrats in Congress.

“I don’t know that she said that, or was that written out by Adam Schiff and Schumer and Pelosi? I would be more inclined to the second,” Trump said during a phone interview with “Fox & Friends.”

“That came out of the wind, it sounds so beautiful. But that sounds like a Schumer deal or maybe a Pelosi or Shifty Schiff,” he said, adding, “Maybe she did and maybe she didn’t.”

Ginsburg, a Supreme Court justice for 27 years, died on Friday at age 87. NPR reported that days before her death, she dictated this statement to her granddaughter Clara Spera: “My most fervent wish is that I will not be replaced until a new president is installed.”

Trump doubled down on this baseless assertion later on Monday.

“It sounds to me like it would be somebody else … It was just too convenient,” he told reporters at the White House.

Republicans announced mere hours after Ginsburg’s death that they intended to hold a vote on Trump’s Supreme Court nominee.

“The Senate and the nation mourn the sudden passing of Justice Ruth Bader Ginsburg and the conclusion of her extraordinary American life,” Senate Majority Leader Mitch McConnell said in a statement on Friday night.

“President Trump’s nominee will receive a vote on the floor of the United States Senate,” McConnell added, indicating that he did not believe the impending presidential election should have any sway over the process.

This marked a massive flip-flop for McConnell, who in 2016 refused to hold a confirmation hearing for Merrick Garland, President Barack Obama’s Supreme Court nominee, on the basis that the nomination came too close to the election. Top Republican senators fell in line with McConnell’s position at the time.

Garland was nominated on March 16, 2016, or 237 days before the 2016 election. Ginsburg died 46 days before the 2020 election, and Republicans are now moving to push through a Trump nominee as quickly as possible.

With a Republican president in the White House, the GOP appears suddenly comfortable moving forward with the Supreme Court confirmation process despite an election on the horizon. Republican senators are now facing allegations from Democratic colleagues that their word essentially means nothing.

“I want you to use my words against me: If there’s a Republican president in 2016 and a vacancy occurs in the last year of the first term, you can say Lindsey Graham said let’s let the next president, whoever it might be, make that nomination,” GOP Sen. Lindsey Graham of South Carolina said in 2016.

Fast-forward to 2020, and Graham wrote on Twitter that he would support Trump “in any effort to move forward” with filling Ginsburg’s seat.

Graham justified his stance by saying that “the two biggest changes regarding the Senate and judicial confirmations that have occurred in the last decade have come from Democrats.” He cited Sen. Harry Reid’s 2013 decision to invoke the “nuclear option” — eliminating filibusters on executive appointments and most judicial nominations, excluding the Supreme Court — while accusing Democrats of conspiring to “destroy the life of Brett Kavanaugh and hold that Supreme Court seat open.”

McConnell also invoked the option in 2017, doing away with filibusters on Supreme Court nominees. But Graham made no mention of this.

Trump is expected to announce a nominee later this week.