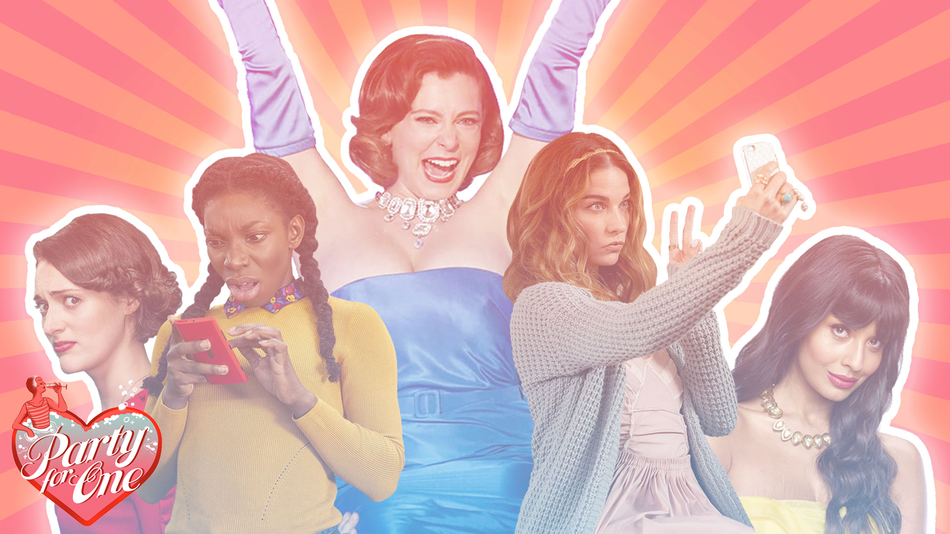 In Party for One, Mashable explores single life in 2020, from Carly Rae Jepsen’s iconic single anthems, to the beauty of alone time, and the fascinating history behind the single positivity movement.

Sometimes being single is a journey and sometimes it’s a destination. For a long time, the untold rule of storytelling was that characters find a happy ending when they all end up married. So it was with Shakespeare and so it was with Parks and Recreation, and almost everything in between.

But in recent years, television in particular has warmed to the notion of a character who actually ends up single at series’ end. They might not all stay that way forever, but there’s immeasurable value in seeing lovable characters who are single at crucial junctures in life — at points that feel like endings, but might just be the beginning.

Here are some of our favorite single TV characters. And yes, since this is about their overarching journeys and series finales — expect spoilers.

Though the final moments of Crazy Ex-Girlfriend hint that Rebecca hasn’t closed the book on all her exes (maybe it just looks that way because we’re #TeamNathaniel), nothing could have been healthier than for this romance-obsessed character to unpack her turbulent history with men and focus inward. In the final season, she prioritized living with mental illness and creating a life free of old triggers and patterns. It’s probably not the best that she hangs out with all her exes in West Covina, but it’s a far cry from the law offices in New York where she started — and when she couldn’t even remember the last time she was happy.

Sansa Stark is a name now synonymous with powerful and even ruthless feminine leadership, but it wasn’t always that way. We remember the innocent girl from Winterfell who dreamed of marrying a prince, and then watched in horror as the cruel world of Westeros destroyed that dream day by day. Sansa may be an iconic character, but she suffered horrific abuse that no person should experience, some of it gratuitous material added to the show.

Still, Sansa emerged a wolf among kittens, her steely resolve the leadership Westeros craved when Jon Snow was still moping around telling anyone who’d listen that he didn’t want the job. It would have been disrespectful to Sansa’s growth and journey to happily marry her off in some disingenuous eleventh-hour coupling, and given the general irresponsibility of Thrones‘ final season and treatment of female characters, we’re glad this ended up the way it did.

You may have blocked out Schitt’s Creek‘s final season breakup because there is simply no pain in this world like seeing the characters on that show suffer, but Alexis and lovable vet Ted did not end up together. They loved each other, they wanted to be together, but the timing simply wasn’t right.

Watching Alexis and the rest of the Rose family mature is one of the foremost joys of Schitt’s Creek, but that doesn’t make the decision she and Ted come to any less devastating. Still, it’s extremely mature, and not something she could have done a few years previously (recall that past Alexis dumped Ted and pursued empty lust for Mutt, so, yeah). We hope they’ll find their way back to each other one day, or to other partners that make more sense later in life. For now, we’re proud of these two for making a tough call and with Alexis for trusting her gut and her family.

While many of the characters on this list will probably find romantic love one day, the unnamed protagonist of Fleabag has never been one to conform. At the start of Phoebe Waller-Bridge’s seminal comedy series, its antiheroine is a one-woman force of spectacular self sabotage. She’s recovering from her best friend’s death, a messy affair that ties back to Fleabag’s own relationship with sex, and her emotions are so numb that she barely bats an eye at her longterm boyfriend’s final departure.

In Season 2, Fleabag has a better handle on sex, but the guilt about Boo stays with her. She cautiously and then fiercely falls in love, but the Priest’s ultimate unavailability speaks to how Fleabag still doesn’t believe she deserves happiness. She is drawn to complication, to challenges, to mess, and while her love for the Priest may pass, her demons may well linger. It’s both a heartbreaking and inspiring emotional journey no matter how many times we watch it, but seeing an arc like Fleabag’s on mainstream television is critical for audiences to feel seen and valid.

Tahani and Jason, The Good Place

None of The Good Place‘s core characters are perfect people, and we watched for four seasons as they slowly learned what makes a good and fulfilling life — a life unlike those they led when we first met them. Eleanor and Chidi may have spent the bulk of their existence together, but they were the only ones. Couples often pair off and ride into the sunset at the end of creator Mike Schur’s TV shows, but Tahani and Jason — once paired together as alleged soulmates — found fulfillment in the Good Place they built together, and the friends they made along the way.

If any show was going to embrace singledom with the energy we need in the 21st century, it was Abbi Jacobson and Ilana Glazer’s Broad City. This was always a show about the beautiful friendship between its titular broads, and in the end that was the only thing we needed to see holding strong as they moved into their separate futures.

Where other characters on this list have prioritized romantic love at different times, Abbi and Ilana always kept it secondary to great sex, smoking weed, and nonstop New York adventures shared with a lifelong bestie.

It feels both exceedingly on-brand and deeply bittersweet that the flirtiest Friend would be the only one still single at series’ end. Joey is the group’s de facto playboy, but his emotional arc is all about the steadiest relationships in his life: The five people he keeps close. For Joey, romantic partnership were never a source of emotional intimacy, but the platonic companions in his life were always there for him — and then some. Here’s hoping Chandler and Monica kept that room over the garage ready for him.

Back in 2015 Michaela Coel introduced us to Tracey, a mid-twenties shop assistant from a religious upbringing who starts the show on a desperate mission to have sex for the first time.

As you can probably guess, things don’t go to plan — but over the course of two seasons navigating friendships, relationships, and the often tricky ground between the two, Tracey learns plenty about both life and herself. And she’s always happy to share her amusing insights with us directly, via a quick aside to the camera.

Contextually, there are a number of reasons why Thomas is one of the only characters not married apropos of nothing by the end of Downton Abbey (looking at you, friends-with-benefits Carson and Hughes). For one, he’s a gay man in the early 20th-century, when living a happy and open life was all but unthinkable.

Too many queer characters in fiction end up facing tragic circumstances and not being able to live with love, but Thomas also did plenty of downright evil things in the show’s early seasons. By the time things were ending, he was a changed man, and his journey was about self-love and redemption above all else.

However, we maintain that in the movie he deserved to eat ass.

Gilmore Girls ended not once but twice with Rory in romantic limbo; first in Season 7, when she was no longer dating Logan and set off on the campaign trail with Barack Obama, and then again after the 2016 revival which saw her running into all her significant exes and also having sex with a wookie (as far as we know, this is the father of her child).

The revival gave off strong Team Jess vibes throughout, reviving the couple’s old chemistry and the fact that they’re still pals all these years later, now that Jess is more mature and Rory’s mom is still dating his uncle. There’s a genuine affection there, the kind that makes for steadfast relationships way more than the physical attraction of their youth ever could. But Jess still doesn’t feel ready or worthy of Rory, and when we left things off he had decided to keep things as they were. Once again, Rory is living the single life, and on-track to being a very cool single mom just like Lorelai. It’s not a bad act to follow.