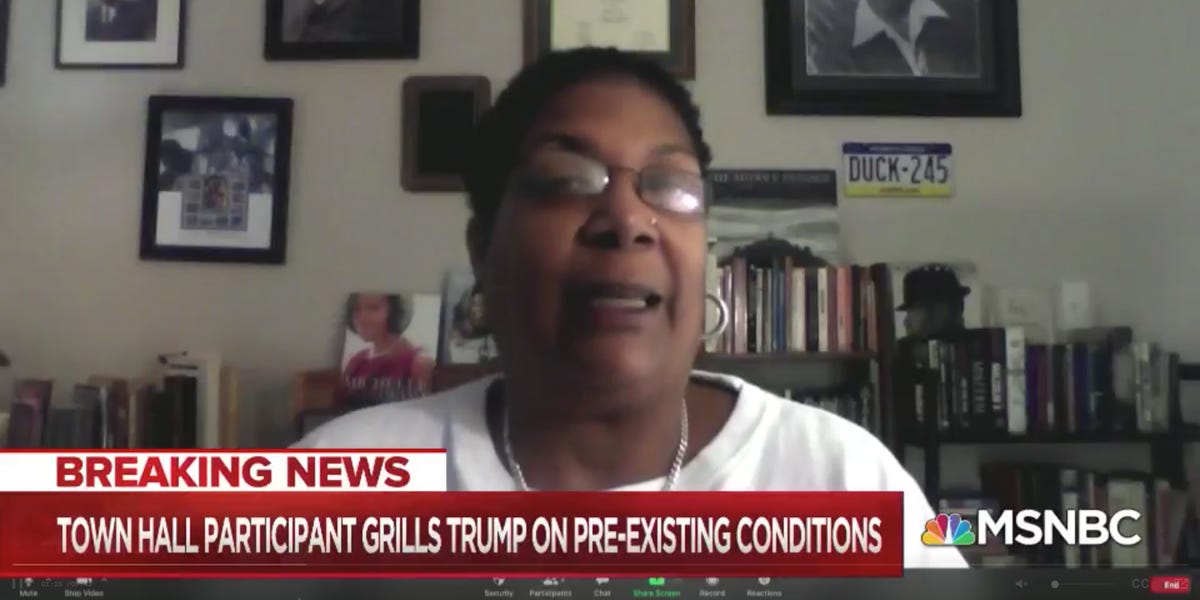 The woman who got into a tense exchange with President Donald Trump at an ABC News town hall event on Tuesday said she broke down and cried afterwards in frustration over the interaction.

Ellesia Blaque, an assistant professor at Kutztown University in Pennsylvania, asked Trump about healthcare during the event, and when he started speaking midway through her question, she said: “Please stop and let me finish my question, sir.” Clips of the interaction went viral the next day.

In an interview with MSNBC after the town hall, Blaque said the moment felt like a student cutting her off during a lecture.

She said she spoke with several friends afterwards who said she acted just as they thought she would.

“Respect is reciprocal … You have to wait until I articulate the question in its completion before you determine what the answer is,” Blaque said.

Blaque also said she was not satisfied with the president’s answer to her question about whether Trump would make sure that people with preexisting conditions like herself are covered by insurers, as was written into law by the Affordable Care Act, also known as Obamacare.

Trump told Blaque that he would, though he has been actively trying to dismantle Obamacare. Trump has long promised to unveil an alternative healthcare plan, though details are scarce.

She told MSNBC: “I walked away and when I got outside of Constitution Hall, I found the first wall to sit on and I broke down and cried in frustration and anger, because he didn’t answer anyone’s question, let alone mine.”

“And he ignored us like we have no value,” she added.

Blaque, who voted for Hillary Clinton in the last election, said she went to the event not sure whether she was going to vote at all.

“I’m 57 years old, I’ve been a dedicated voter since I was 18 years old. And what have I ever achieved or gained from it? Nothing,” she told MSNBC. “I don’t care if it was a Democrat, a Republican, Obama, it doesn’t matter. I really did not gain much, if anything, from their presidency. So what is the point?”

However, after her interaction with Trump, and an interaction with a new American citizen while leaving the event, Blaque said she changed her mind and decided to vote for Democratic presidential nominee Joe Biden.

“The person who drove me home is a newly-minted citizen from Turkey, and we were talking about his family in Istanbul and making comparisons,” she told CNN. “And he’s so grateful to be in the United States and excited to cast his vote. How dare I, an American-born citizen, not cast one of my own? And that’s what changed my mind.”