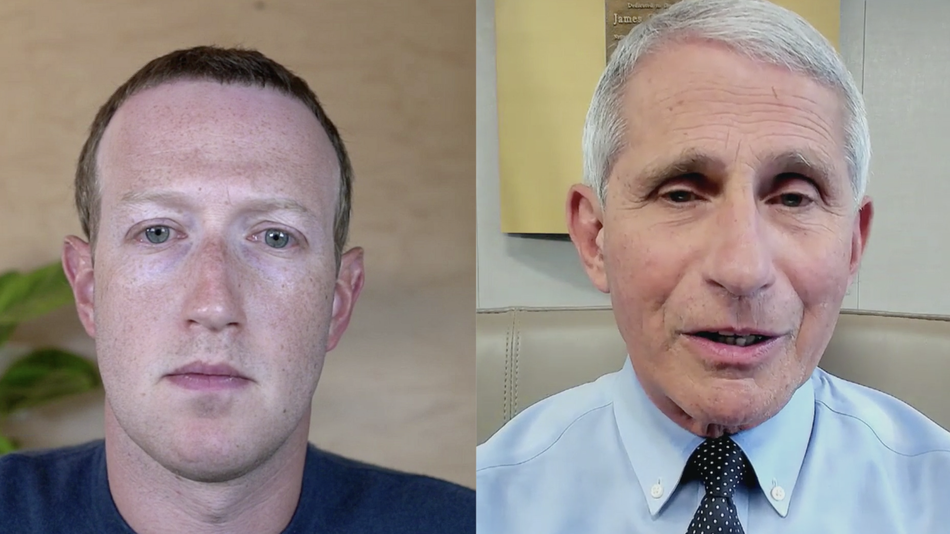 During a Facebook Live Q&A with Dr. Anthony Fauci, Mark Zuckerberg did not mince words when he criticized the Trump administration’s response to the coronavirus. That’s a departure from Facebook’s usually kowtowing relationship with the president — and Facebook’s own struggles to contain and meaningfully address the spread of COVID-19 misinformation on its platforms.

Zuckerberg opened the Q&A with a statement that diverged from the Trump administration’s  downplaying of the coronavirus and praising of the country’s response. Namely, he started by acknowledging that things are bad here.

“While every other developed country in the world, or almost every other country, has had a relatively smaller number of new infections, we now face a record number of new infections every day,” Zuckerberg said. “At this point it is clear that the trajectory in the U.S. is significantly worse than many other countries, and that our government and this administration have been considerably less effective in handling this. I personally think we need to take this a lot more seriously.”

Zuckerberg’s first question to Fauci drove the point home when he asked why the U.S. response has been less effective than many other of the country’s response. Namely, he started by acknowledging that things are bad here.

Fauci then gave an overview of the country’s state of affairs, noting the positive gains in the northeast, but the troubling surge in southern states like Florida. Fauci called for a “reset,” meaning the country has to regroup to enact better social distancing health measures.

Zuckerberg agreed with Fauci’s statement, but wasn’t done with Trump yet.

“I think you might be quite generous in your description of the government’s response here,” Zuckerberg said. “I was certainly sympathetic early on when it was clear that there would be some outbreaks, no matter how well we handled this. But now that we’re here in July, I just think it was avoidable. And it’s really disappointing that we still don’t have adequate testing. That the credibility of our top scientists like yourself and the CDC are being undermined. That until recently, parts of the administration were calling into question whether people should follow basic best practices like wearing masks.”

The remarks are pointed: Trump only recently endorsed wearing masks, and is loathe to wear masks in public himself. Considering that Facebook usually appeases Trump when it comes to allowing him to lie on its platform, and that Zuckerberg has met with the president in both public and private, the rhetoric stings.

However, it was also a bit rich.

Zuckerberg failed to acknowledge his own platform’s role in the “undermining” of scientists and health agencies. Since the beginning of the pandemic, Facebook has been struggling to contain the spread of misinformation about coronavirus. It has launched an information center and pop-ups encouraging people to get their information from the CDC. In April, it labeled 50 million pieces of content as misinformation, and announced Wednesday that it was launching a portal dedicated to correcting common misconceptions about coronavirus.

However, the fact remains that Facebook unequivocally allows President Trump a platform on which he himself spreads misinformation about coronavirus and numerous other topics, with only the most meager of fact checks, sometimes.

Zuckerberg tentatively acknowledged some of that misinformation in the Q&A. Without explicitly naming the anti-vaxxers that flourish on his platforms as such, Zuckerberg asked Fauci to explain to some “fringe elements” about the safety of vaccines.

In another instance, Zuckerberg invoked one common misinformed screed about masks, which is that masks cause you to breathe in your own carbon dioxide, which is not good for you. Zuckerberg asked Fauci “Are there any known adverse risks to wearing a mask?” Fauci, of course replied, “not at all.”

Zuckerberg has criticized Trump before. When Trump glorified violence against Black Lives Matter protesters, Zuckerberg said he was “deeply shaken and disgusted.” That didn’t stop the CEO from justifying the platform’s decision to leave the remarks up on Facebook, though.

Facebook has certainly ramped up its efforts to fight coronavirus misinformation. However, until Facebook meaningfully enforces on Trump its own rules against speech that can cause harm, and is able to stop coronavirus misinformation from spreading like a virus itself due to the very nature of Facebook, Zuckerberg’s plea for science and praising of Dr. Fauci are just words.

How to file for a piece of that $117.5 million Yahoo data-breach settlement