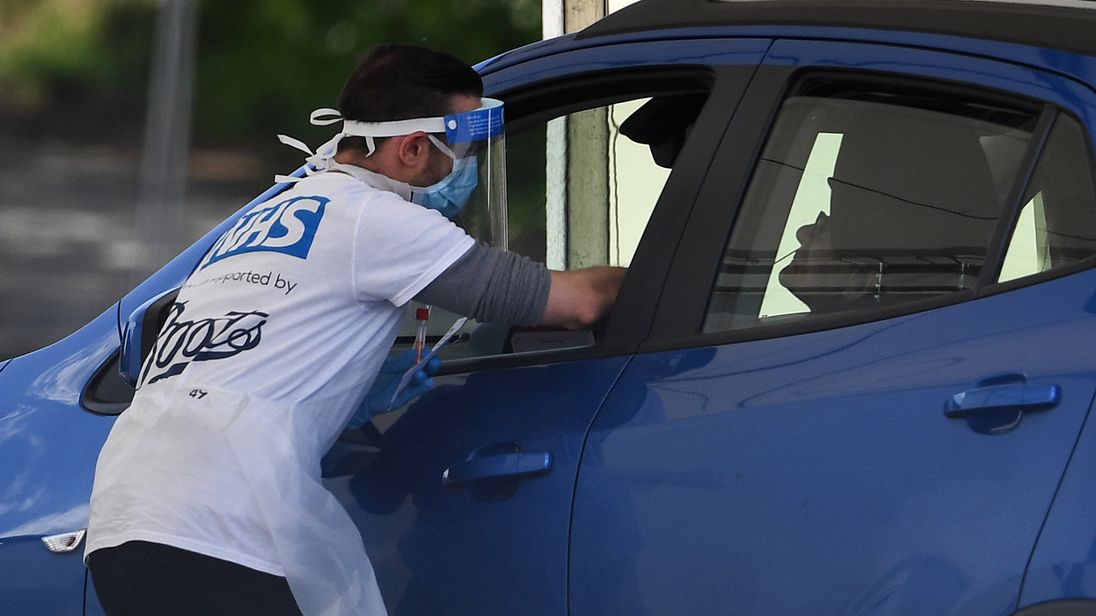 Another 20,530 people have tested positive for COVID-19 in the UK, according to the latest government data.

This is a drop of 712 cases from the 21,242 recorded yesterday, and a further drop from the record set on Wednesday.

A further 224 people have also died within 28 days of testing positive – a rise since Thursday’s count of 189.

These latest figures taken in the 24 hours up to 9am on Friday now bring the total number of cases in the UK to 830,998, while 44,571 people have lost their lives with the disease.

This figure rises to 59,000 in separate figures from statistics agencies that include UK-registered deaths where COVID-19 is mentioned on the death certificate.

Other figures also show there are now 6,518 people with COVID-19 in hospital in England, rising from 4,647 since last week.

601 of these patients are in ventilation beds – another rise from the 482 a week ago.

There were also 997 people with COVID-19 admitted to hospital in England on Wednesday – the latest confirmed figure – and is another rise on the previous week, which saw 706 admissions on the same day.

It comes after the Official for National Statistics estimated earlier on Friday that around 1 in 130 people had caught the virus in England alone last week.

The agency said this meant there were around 35,200 new cases a day between 10 and 16 October, and around 433,300 people in the country were infected.

This is an increase on the estimated that 1 in 160 people had contracted the virus during the week prior – meaning there had been around 27,900 cases per day.

“The highest COVID-19 infection rates continue to be seen in the North West, Yorkshire and The Humber, and the North East,” said the ONS, which noted a rise in all age groups over the last fortnight.

The highest increase, however, was seen in older teenagers and young adults.

According to the government’s science advisers SAGE, the UK’s reproduction (R) number has fallen since last week to 1.2-1.4 – and comes as parts of the country brace themselves for the introduction of extra lockdown measures.

Wales is set to go into a full circuit break lockdown from 6pm on Friday, while Coventry, Stoke and Slough enter the government’s second-highest alert level, Tier 2, on Saturday.

South Yorkshire will be entering Tier 3.