In an announcement today from its support account, Twitter said it is removing the option to tag locations in tweets. The feature will still be available for photos through Twitter’s updated camera. The company said this is because “most people don’t tag their precise location in Tweets.”

Twitter users can opt out of location sharing in its “privacy and safety” menu. If you don’t want to share your location details, you should continue keeping the feature turned off since it is still available in Twitter’s camera. 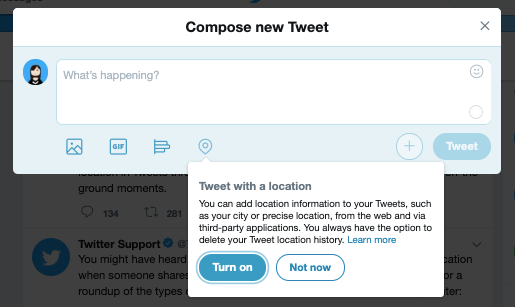 Twitter’s location tagging feature for tweets on its website

While location tagging may not have been a particularly popular feature (and also posed a potential privacy nuisance for people who didn’t opt out of location sharing), it nonetheless had its uses. For example, researchers used it to study large-scale demonstrations, including Occupy Wall Street in 2011 and the 2013 Vinegar protests in Brazil.

After the location sharing feature for tweets is removed, users who want to share where they are can do so through services like Foursquare or Yelp or location hashtags.

The real risk of Facebook’s Libra coin is crooked developers