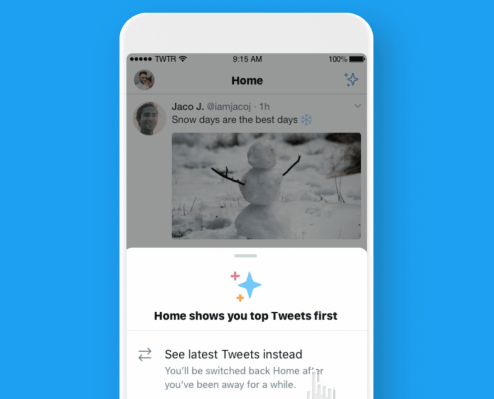 Twitter is giving users the ability to easily switch between seeing the latest tweets first and seeing the company’s algorithmically chosen “Top Tweets” when they open the app.

The company began testing this feature a few weeks ago, but they are officially rolling it out globally to all iOS users today, with Android and desktop users likely getting access to the feature sometime in January, according to the company.

This is part-resolution and part extended cop-out for Twitter, which has spent the better part of the past couple of years figuring out how to satisfy a need for growth with vocal, loyal users who want the act of opening the app to continue to mean getting the immediate pulse of the internet. The algorithmic timeline is probably a better business move for Twitter, something that will ensure that more causal users can get a more encapsulated experience when they open the app rather than a hodgepodge snapshot of their followers’ thoughts.

The company has explicitly said that the “Top Tweets” feature has increased both engagement and conversations on the app.

Twitter’s solution to its algorithmic ails is called the sparkle button and it sits in the top right of your screen allowing users to essentially temporarily disable “Top Tweets” and enjoy a pure reverse chronological Twitter feed. Though the company sees a lot of utility in algorithmic feeds, they also acknowledge that recency is critical to the ethos of Twitter and that in certain instances, like a sporting event or breaking news situation, there’s a lot of value in seeing what’s new immediately.

You don’t necessarily get to set your preference in stone, though.

In what is likely to be a controversial move, “Top Tweets” is enabled by default and it seems that you will have to re-enable the feature periodically. Twitter says it’s experimenting with how often that is, though it will at least remember your preference for the entirety of your session. So, if you check your mentions and tap on the Home tab you won’t return to “Top Tweets” if you had previously been browsing the reverse-chronological feed.

Though the company has said today’s rollout won’t be affecting the volume or frequency of “Top Tweets” postings, it’s clear that this feature launch gives the company a much longer leash to experiment with changing up the core timeline, and in general offers the company a proper means to get reverse-chronological hold-outs people to gradually adapt the algorithmic feed without feeling quite as forced to do so.

It would have been great if Twitter introduced this months ago, for all the philosophical shifts that the algorithmic timeline signaled, the most annoying part of the change was how users were given mixed messages about being able to choose whether they could keep the old timeline.

Today’s move is likely to make most users happy, though. Unburying important toggles from the depths of settings is always welcome, and communicating major changes is especially important to a company like Twitter that doesn’t often change up its core product dramatically.