Facebook’s share price fell over 20 percent in after-hours trading today after the company announced its slowest-ever user growth rate and a scary warning that its revenue growth would rapidly decelerate. Before today’s brutal Q2 earnings, Facebook’s share price closed today at $217.50, but fell to around $172 after the earnings call. That’s a market cap drop of roughly $123 billion. In two hours, Facebook lost more value than most startups and even public companies are ever worth.

Slowest-Ever User Growth Rate – Facebook’s monthly user count grew just 1.54, compared to 3.14 last quarter. Daily active users grew even slower at 1.44 percent, compared to 3.42 percent last quarter. For reference, 2.18 percent was its previous slowest DAU growth rate back in Q4 2017. Suddenly hitting this wall could limit Facebook’s total user count over the long-run, and its revenue with it. Facebook tried to distract from these facts by announcing a new “family of apps audience” metric of 2.5 billion people using at least one of its apps, which will hide the shift of users from Facebook to Instagram and WhatsApp.

User Count Shrank In Europe, Flat In US & Canada – Facebook saw its first-ever decline in monthly user count in Europe, from 377 million to 376 million. It got stuck at 241 million in the US & Canada after similarly pausing at 239 million in Q4 2017. Those are Facebook’s two most lucrative markets, with it earning $25.91 per user in North America and $8.76 in Europe. If those markets stall, even swift growth in the Rest Of World region where it earns just $1.91 per user won’t save it.

Decelerating Revenue Growth – Facebook’s revenue grew a remarkable 42 percent year-over-year this quarter. But CFO David Wehner warned that metric would decelerate by high single-digit percentage per quarter over the coming quarters. Wehner said a combination of currency headwinds, new privacy controls, and new experiences like Stories will contribute to the deceleration. This news is what caused Facebook’s share price to drop from -7 percent to `-20 percent. 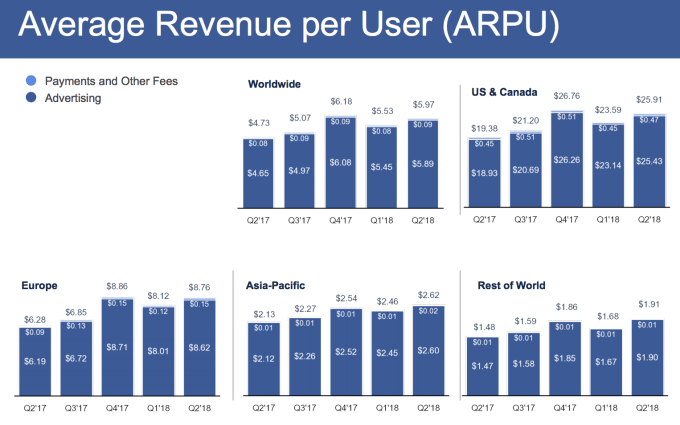 Privacy And Well-Being – Q2 saw the debut of Europe’s GDPR that forced Facebook to change its privacy policies and get users to agree to how it collects data about them. Wehner blamed GDPR for Facebook loss of users in Europe. That law and Facebook’s Cambridge Analytica scandal led the company to have to improve its privacy controls. These could make it tougher for Facebook to target people with ads or show their content to more people.

Meanwhile, Facebook has continued to adopt the “Time Well Spent” philosophy, removing click-bait news and crappy viral videos that lead to passive internet content consumption that studies say is unhealthy. Instead, Facebook is pushing features like Watch Party where users actively interact with each other. Those might not produce as much time on site and subsequent ad views, but CEO Mark Zuckerberg said the changes are “positive and we’re going to continue in this direction.”

The Shift To Stories – Facebook estimates that by in 2019, sharing via ephemeral vertical Stories slideshows will surpass sharing via feeds. The problem is that advertisers may be slower than users to make that shift. “Will this monetize at the same rate as News Feed? We honestly don’t know” COO Sheryl Sandberg said. Stories ads might be full-screen and more immersive, but they don’t show off links to online stores as well, nor are they as well optimized from decades of banner ad experience by the industry.

Luckily, even though Snapchat invented the Stories format, Facebook has far more people using it each day, with 150 million Stories users on Facebook, 70 million on Messenger, 400 million on Instagram, and 450 million on WhatsApp . If Facebook does manage to figure out Stories ads, it could dominate, but it could take years for its advertiser count and ad prices to rise to offset the shift away from feeds.

2.5 billion people use at least one of Facebook’s apps