Welcome to Dial Up, Mashable’s most excellent look at technology in the ’90s, from the early days of the World Wide Web to the clunky gadgets that won our hearts.

3D computer graphics were revolutionizing video games and movies, everyone wore oversized clothes, and the Backstreet Boys were busy duking it out with *NSYNC for boy band supremacy.

In 2019, the world is seemingly on fire every day. More specifically, technology has made everything just a little too connected. With all of our devices — phones, laptops, tablets, and TVs — now connected to the internet in one way or another, there’s no way to escape anything. Ever. FOMO pervades all parts of life.

The ’90s were a way simpler and better time. We typed “143” into pagers to tell somebody “I love you.” Multiplayer gaming meant literally going over to a friend’s house and playing next to them on the same couch. And renting a movie meant going to Blockbuster.

It was a wonderful slower era and life would be a little better if we could just rekindle some of the many technology limitations that allowed us to live with less stress.

Oh, who are we kidding? Urban Outfitters and Instagram filters might make you feel extremely nostalgic for the ’90s, but let’s call a spade a spade: ’90s tech sucked. Truly.

Look, I’m not disputing the fact that the ’90s were exciting times — every decade has its shining moments — where every year seemed to herald something innovative and groundbreaking. But in terms of technology, I wouldn’t trade what exists today for what I had during my childhood.

For sure, I agree that too much of something can be overwhelming, but do you really miss waiting 10 minutes for a low-res JPEG to download from the internet through a slow-ass 56K modem? I didn’t think so.

I’m sure I’ll catch flak for this from some of you guys who are still chugging Capri Sun and watching Friends on repeat. But let me break down why ’90s tech sucked and why you’re probably remembering the era through thick rose-tinted glasses.

Video games: Sony’s PlayStation and Nintendo 64 popularized 3D graphics, but holy moly do they not hold up today. Compared to the photorealistic high definition and 4K video game graphics on PlayStation 4, Xbox One, and Nintendo Switch (for the most part), the 3D graphics of the ’90s were primitive and comically blocky.

Playing multiplayer games meant you all had to sit together in the same room and losing could sometimes mean getting roughhoused as opposed to simply trash talked over Xbox Live. Fixing consoles involved weird methods like blowing on cartridges and flipping consoles upside down. And let’s not forget: the controllers were horrible in the ’90s. The Nintendo 64 and its three handles was a monstrosity to look at and hold.

Watching movies at home: In the ’90s, renting movies to watch at home was a real pain in the ass. You had to drag your butt over to a physical store and were limited to whatever movies were in stock. If every copy of Titanic was rented out, well, tough luck kiddo, you’d have to come back when it was returned. Some stores charged membership fees, and, of course, late fees.

Nowadays, you have access to virtually unlimited movies and TV shows at the click of a button from the likes of Netflix, Hulu, or Amazon Prime. You still have to pay a monthly subscription, but for what you get, it’s way less than most of us paid in the ’90s.

Rewinding tapes: As if renting movies wasn’t a big time suck, you also had to rewind the damn VHS tapes before bringing them back to the video rental store. If you didn’t remember to use your VCR’s handy rewind feature (or a separate standalone VHS rewinder like that cool sports car) to spin the magnetic tape back to the beginning, you could get charged extra.

Headphones: You really don’t know the pain of the ’90s until you remember how bad some headphones were. Made of cheap, thin plastic and metal, most affordable headphones were made by the likes of Coby or Panasonic and came with flimsy foam ear pad covers, which tore easily. Sound quality was always static-y or tinny and you almost always needed tape to hold the whole thing together at the wires or the headband. Thanks, but I’ll take my AirPods and Beats instead.

Listening to music: Speaking of crappy music experiences, Walkmans and CD players totally sucked. Cassette tape players could only store like 60 minutes of music and you had to flip cassettes from side A to side B after a handful of songs. Not to mention, like VHS tapes, you also had to rewind the tape to listen from the beginning. And if the cassette’s tape got scrambled from rewinding and fast-forwarding (a very common thing), you’d have to use a pen or pencil (or your finger) to straighten it out. It was super annoying.

And CD players — sure, they sounded better than cassette tapes, but they came with their own inconveniences. From scratching easily to constantly skipping (CD players with anti-skip eventually came out, but were pricier), I personally felt CDs didn’t make listening to music any less cumbersome than cassette tapes. Plus, CDs and CD players were bulkier than cassette tapes and Walkmans, which made it harder to bring your music with you unless you put it in a backpack or wore cargo pants. Organizing your CDs in Case Logic CD binders was also a huge time suck.

Next time you feel like complaining about how Apple Music isn’t nearly as good as Spotify, think about how crappy it was in the ’90s when you couldn’t easily get new music with the tap on a touchscreen. Or how you couldn’t carry the same abundance of songs in your pocket as you could today.

Communicating with friends: Smartphones spoiled us with the ability to send iMessages, memes, and Animoji. We take it for granted that we can now call or Snap or DM anybody whenever the hell we want.

Back then, though, we had to wait — imagine that! — until a family member got off the phone before we could call somebody. If you were privileged enough to have a beeper or pager, you had to memorize numerical codes like “193” which meant “miss me?” and “346” for “call me back” to convey what you wanted to say.

How we ever had the patience to tolerate landlines and beeper codes is beyond me.

Computers and the internet: We take it for granted how powerful our computers are and vast the internet is, but back in the day, state-of-the-art personal computing meant something completely different.

Web browsers like Netscape Navigator were depressingly gray, slow, and didn’t support extensions. Writing up reports meant cracking open an encyclopedia or going to the library to fire up Encarta on CD-ROM instead of just going to Wikipedia or Google. 3.5-inch floppy disks with 1.44 megabytes of “high density” storage were considered cutting edge. Your computer’s sound card (sometimes called “sound blaster”) frequently broke down leaving you without audio. And AOL Instant Messenger was the only truly private way to chat with your friends because your parents didn’t understand it.

Don’t get me wrong, these innovations were revolutionary in the ’90s and laid the groundwork for the convenience we have today, but man do I not miss those early days.

The reasons for why tech sucked in the ’90s goes on and on. Here are a few more examples that make me cringe just thinking about them.

CRT TVs were huge, heavy, and constantly lost reception. Who remembers slapping the top of their TVs to correct the “stuck” picture?

Or what about camcorders? They used to be so big and heavy you had to hoist them over your shoulder. My uncle brought one with him during his visit from Hong Kong in 1994 and looked silly carrying a briefcase around just to transport it.

And film cameras! Back then, you couldn’t see your photos instantly. You’d have to take your film to a store and get it developed and that would take days.

And no WiFi! How did we live without WiFi?!

I get that today’s constant barrage of new tech products and services can be overwhelming — there’s like a new phone announced every day or another privacy breach that makes you not want to trust any company with your data. In comparison, tech in the ’90s was a lot easier to deal with.

But I, personally, don’t think any ’90s tech is worth celebrating — in any capacity — no matter how fondly you remember it.

The warmth you felt from what was then cutting-edge technology can’t be replicated today because it really was a different time.

Buying a cassette tape player at Urban Outfitters might spark some trip down memory lane, but you’ll feel empty once the novelty’s passed because we’ve got better tech now.

Nostalgia, whether for ’90s tech or not, is fleeting and always will be. We can agree to disagree — I’m sure some of you will — but for me, I’ve got no love for inferior ’90s tech, no matter how much delight it may have brought me when I was a kid. I have better tech now and anything less would just be too much of a step backwards to be enjoyable.

So, if you’ll excuse me, I have to get back to zombie scrolling on Instagram and yelling at trolls on Twitter. 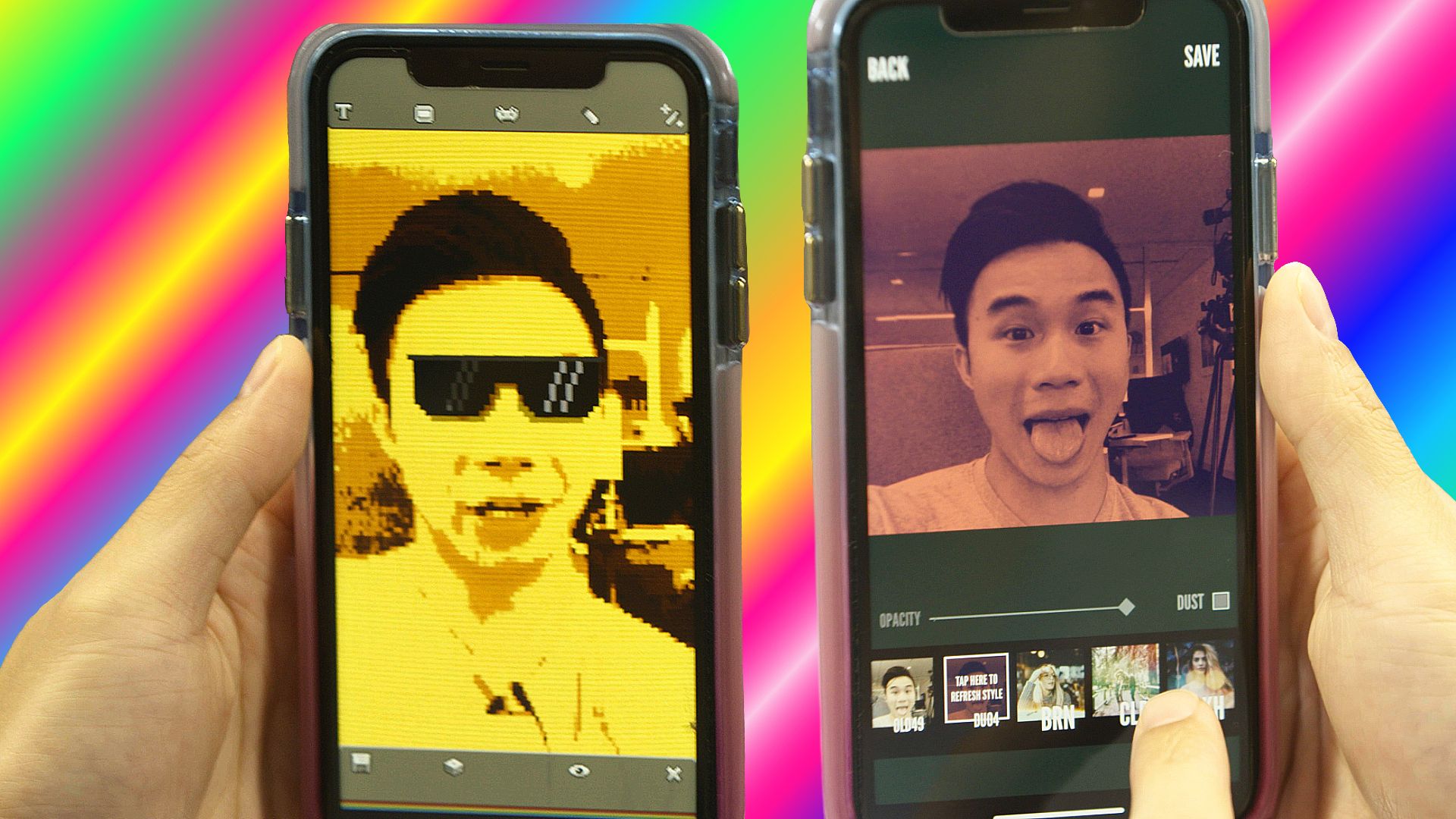 Save $69 on the Series 4 with this Amazon coupon