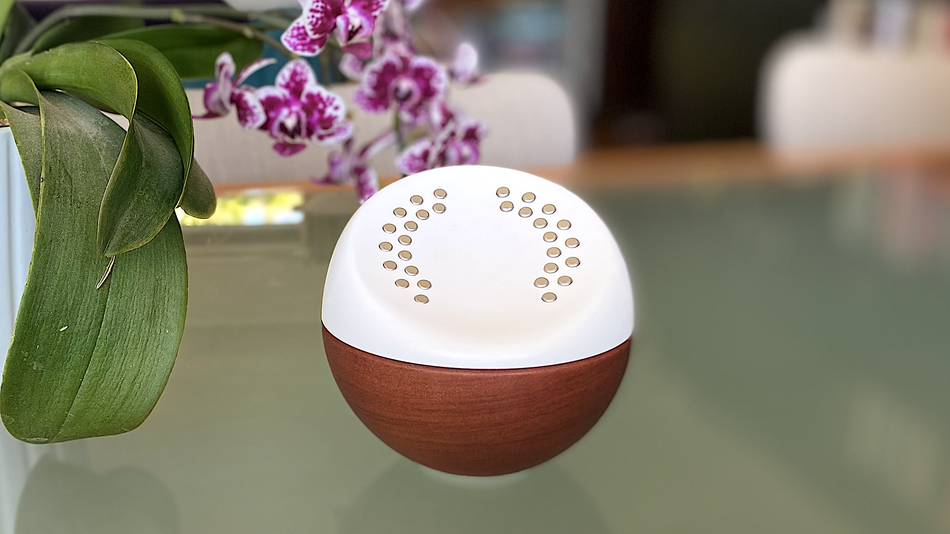 Can buzz too much • Premium ‘studio’ offering not worth the cost

Easy to pick up, hard to put down, the Core trainer will build your meditation habit like no other device.

Imagine the sensation of holding a small but nicely solid wooden teacup in your hands. Now imagine that cup can purr like a large cat; if you match your breath to the rhythm of the purring, you could either be calmed down or energized, depending on your preference. Further imagine that this cup is taking a key measure of your cardiovascular health, and can help you improve it in the space of a few minutes every day.

That describes my experience of using the Core  meditation trainer. It’s a curious $169 rosewood orb that measures your heart rate via your thumbs and pairs with a phone app containing a raft of meditation classes and breath training sessions. Team Mashable first tried the Core during CES in January. But as it turns out, there’s a world of difference between getting a demo of a meditation device on a crowded show floor and using it for a month at home while combating the anxiety of coronavirus quarantine.

The former experience left me underwhelmed; the latter convinced me that the Core is probably the best meditation gadget money can buy right now.

This is not a pronouncement I make lightly. I’m a big fan of the Muse meditation headband in all its forms (original, Muse 2, and Muse S, a softer headband designed for sleep). The Muse’s EEG technology detects how active your brain is during meditation; its app gives you audio feedback accordingly. I was so taken with the possibilities of that meditation technology that I invented a whole contest around it, March Mindfulness.

But the Muse’s achilles heel has always been its calibration process, which invariably involves minutes of futzing with the headband so the app can pick up signals from all its sensors. Users with longer hair report problems with the behind-the-ear sensors, on the new Muse S especially — and as my own hair became longer in these haircut-free months of 2020, I experienced the same frustration.

I began to do my meditation practice via the Apple Watch’s Breathe app, which sends calming vibrations to your wrist to match a customizable number of breaths (between four and 10 breaths per minute, for a maximum of 5 minutes per session). But this is a pretty basic meditation experience. I longed for an app that could help practice the many, surprisingly different kinds of breath, as outlined in Andrew Weil’s excellent audiobook Breathing: The Master Key to Self-Healing.

Then along came the Core meditation trainer, which is what you might get if you crossed the Muse’s EEG technology with a physical manifestation of the Apple Watch’s Breathe app. There’s no calibration necessary with the Core; you open the app, you pick it up and you’re good to go. While there is a dizzying array of meditations to choose from if you dig in, the app’s algorithm selects one for you on its home screen so you can start right way.

I wasn’t always impressed with its homescreen choices  (why recommended a “sleep preparation” meditation at noon, Core?) but often appreciated having the tyranny of choice taken away from me. This forced me to experience many kinds of guided meditation I wouldn’t normally choose.

Core’s strongest offerings, in my experience, were under the “Breath training” tab. Here are four energizing kinds of breath, including a super-fast inhale-exhale named “coffee” and “box breath,” the official breathing technique of the Navy SEALs. Then there are three “stress relief” forms of breathing (named “whiskey,” “water,” and “reset”) and two more unusual breath patterns under the heading of “transform.” I did each one once with the three-minute guided introduction voice, then practiced each for up to 10 minutes at a time with one of the six ambient soundtracks provided.

Practice breathwork meditation from sources such as Weil’s audiobook, and you’ll find yourself doing a lot of counting in your head — or forgetting how many seconds you’re supposed to hold your breath in any given form. Core makes it easy because you can both see (via a circle of lights that appear in the middle of the Core’s white top) and feel (via vibrations) how you’re supposed to breathe.

Just as addictive as the breathing meditations were the results you get at the end of every Core session. Core uses two measurements from your thumbs: your heart rate, and your Heart Rate Variability (HRV). The latter is an important measure of heart health that is little used outside hospitals. You shouldn’t read too much into the Core HRV score — as the app points out, it can vary depending on your age, genetics and a variety of circumstances.

But each Core session contributes to your HRV average. If you can increase that score over time, it’s an indicator that you are getting less anxious and more resilient; multiple studies have found a higher HRV indicative of reduced stress and improved mental and cardiological health. I am now hooked on improving my HRV.

Most impressive of all was the Core’s battery life. I got through around 10 days of using it twice daily before I had to recharge the thing via its micro-USB cradle. The need for this white plastic cradle was a minor annoyance — why can’t we just plug the device in directly? But the need to charge up came so infrequently that I was able to just throw the Core in my bag, confident I could use it outside in a variety of sun-drenched, socially-distant locations.

Version 1.0 of any device is rarely perfect, and the Core is no exception. I appreciate its design, and that the Core gives you something to do with your hands, which are often restless during meditation.  But my hands felt just a touch too large for the orb, with my pinky fingers having to wrap around each other. Your mileage will vary, of course — but for the record, my hands are the same length as the average male’s, 7.6 inches. It would be great to see the company produce a slightly larger version for half its potential user base.

That purring vibration, meanwhile, can sometimes feel too strong — less like a cat and more like someone revving the engine of a sports car. Also, bafflingly, many of the Core app’s meditations don’t use the vibration to signify breathing. They just rev up and down in what feels like random patterns, no matter what the teacher is telling you. Which often served to increase my anxiety rather than lowering it. (This was particularly true on the days when I had a few bouts of vertigo for unrelated health reasons; picking up the Core in hopes of centering and calming myself ended up making me more dizzy than before.)

Core offers a $10-a-month (or $60 a year) premium service called Core Studio, and I wish I could recommend that. However, I found its content to be almost unusably haphazard. In addition to the vibration problem, these sessions varied wildly in volume; some were too quiet, some too loud, and no instructor was telling me anything I hadn’t already picked up from the app’s free guided meditations. (One instructor lazily suggested checking in with my feet, my hands and the top of my head all at the same time: Really?) If users want more free content from Core, they can also check out the live practices the company is screening on Instagram TV while its San Francisco meditation studio is closed.

Core has engaged a handful of prominent DJs to produce ambient music for meditation. I almost couldn’t find the first one, from a DJ named ESTA, as it was hidden under the generic title “Core Studio Sessions: Breathe” rather than where you might expect it, the app’s “Sound & Music” tab. In any case, I doubt the value of anything more involved than an ambient soundscape in this setting. Does a DJ’s “self-expression” really add anything to a session where you’re supposed to be mindful of everything going on in your mental and physical experience, or does it distract?

I understand that such subscription services are where the money is supposed to be, and this likely  forms a big part of the business plan behind Core’s $4 million in seed funding. Muse, meanwhile, is also trying to reinvent itself as a subscription service. But the world is full of meditation subscription services, a field dominated by Calm, Headspace, Insight Timer, and about a dozen other services. The market is simply saturated.

Before reinventing the wheel, then, Core should focus on improving its, um, core offering. His and hers versions, direct USB charging, more chill vibration technology, and more breath training meditations would be most welcome. With just a few minor tweaks, this little orb could rule the meditation world.

Don’t arrest anti-maskers. There’s a better way to handle them.

Don’t arrest anti-maskers. There’s a better way to handle them.