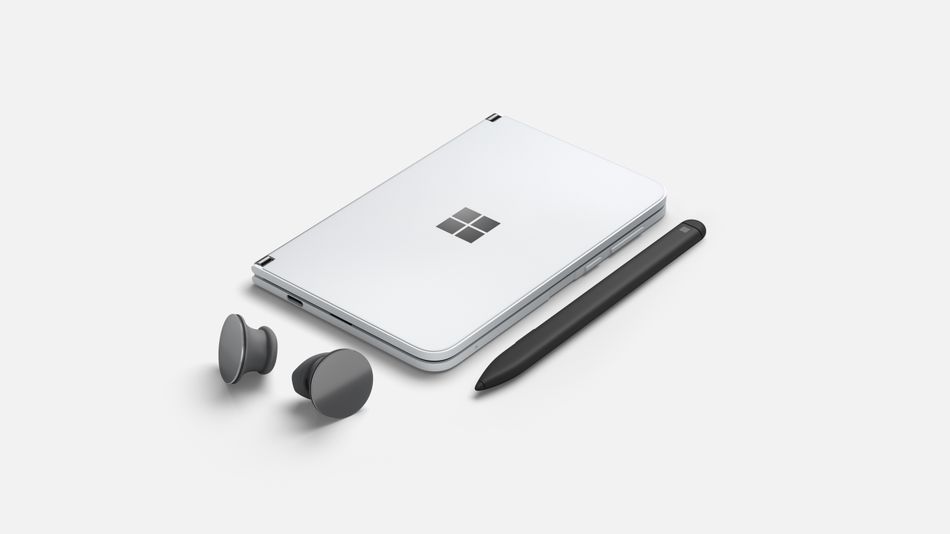 That much was clear from an early morning (virtual) briefing which saw the company trot out select team members to discuss the upcoming not-a-phone, not-a-tablet, definitely-not-a-foldable Surface Duo. The dual-screened device, a stark departure from the Lumia phones that tried and failed to pave the way before it, is clearly a gamble for Microsoft and the Surface line. After all, it is the company’s first “smartphone” effort since it abandoned Windows 10 back in 2017.

That’s not conjecture, either. Panos Panay, the company’s chief product officer, said as much several times, referring to the Duo as a “risk,” but one that he hopes will enable the “next wave of mobile computing.”

Sure, you can read that as Panay merely hedging his bets and spinning the Duo’s announcement into a sort of PR-tableau that not only distances the device from comparisons to other flagship mobile releases, but also creates a standalone product pillar for itself. But he’s not wrong for it. The Duo — which runs on Android 10 (I know! I’m still adjusting, too) and delivers an experience that should be familiar to anyone who’s opted in to Google’s mobile ecosystem — is unlike other more daring mobile form factors that we’ve come to know and not necessarily love within the past two years.

Yes, I’m talking about the embarrassing misfire that was Samsung’s imperfect and expensive Galaxy Fold, the Galaxy Z Flip, and the rebooted Razr from Motorola. None of those devices managed to really catapult the mobile category forward, owing to the novelty inherent in those designs — not to mention the eye-popping price tags.

So why does Microsoft expect its fortunes to be any different? For one, the Duo’s design lends itself to the sort of multi-screen multitasking we’re all guilty of in 2020, and it does that without a bendable (read: breakable) screen. The Duo features two separate 5.6-inch, 1800×1350 displays (401 ppi) that spread out into a considerable 8.1-inch, 2700×1800 display (401 ppi) when unfolded. They’re connected by a 360-degree hinge that allows for the device to be folded into several “postures” as Microsoft calls them. You can use the Duo in single-screen mode with one display folded back, spread open for the full two-screen experience, flipped back as a kickstand for gaming or streaming, or even at 90 degrees for a landscape, laptop-like feel.

And, according to Ralf Groene, CVP of design for Windows and Devices, unlike the fragile mechanisms on other foldable mobile devices, you don’t have to panic about wrecking the Duo’s hinge. Groene said that it should last roughly “until the human is tired of folding,” wryly adding, “I think the human will give up before the device breaks.”

How’s that for confidence in the design?

Now, let’s talk about price. When Samsung unveiled its first Galaxy Fold, eyes bulged and wallets brayed at the insane $1,980 price tag. To be clear, Microsoft has mostly avoided that particular Achilles heel by offering the Surface Duo at a starting price of $1,399. There is precedent for this laptop-like pricing. It’s just $100 less than a fully kitted-out iPhone 11 Pro Max, so it’s not like Microsoft is asking too much. For that amount, you’re getting 6GB of RAM and 128GB of storage which can be bumped up to a hefty 256GB.

Before I delve into the specific software magic of what the Surface Duo can do with its novel UI, let’s look at what you’ll actually be getting and not getting under that book-like hood.

For starters, despite running on Qualcomm’s Snapdragon 855 processor, there’s no support for 5G, at least not on this iteration of the Duo. To enable that, Microsoft would have to either upgrade to the 855 Plus or integrate a separate modem. And that omission is unsurprising given the relatively paltry 5G coverage footprint that currently exists nationwide. So, no major loss there.

You also shouldn’t expect top-notch cameras as Panay noted that “imaging is not a primary focus” for the Duo, a statement that’s borne out not only by its multiple use cases, but also by its singular 11MP (f/2.0) lens that’s optimized for both selfies and rear-facing photo capture.

And really, those are the only two “dings” against the Duo right now, as far as I can tell without getting my hands on the device.

With any device of this size and certainly one running multiples apps at once, battery life should be a consumer’s major concern. So, it’s unclear if the dual 3,577mAh battery powering the Duo will be enough to get most users through a day — I’ll certainly have a clearer idea when I can test it. But, according to Microsoft, this should net users “all day battery life” which works out to up to 15.5 hours of video playback, up to 10 days of standby time, and up to 27 hours of talk time.

Two is better than one

So what can this not-a-phone, not-a-tablet, not-a-foldable, not-a-laptop actually do? Think of it more like a dual-monitor desktop setup, but in your hand. The true appeal of the Duo is in its ability to let you mix and match your app usage across its two screens. Microsoft even offers a handy software shortcut for this called “app groups.” So you can set, for example, an app group to launch that pairs Kindle with OneNote (apparently CEO Satya Nadella’s favorite grouping), or Yelp with Google Maps. Tapping on any links within one app, like directions, will immediately launch on the opposite screen. These app groups can be set by the user and will appear on the homescreen. It sounds simple on paper, but it could prove to be the Duo’s most effective selling point.

You can also use either display as your homescreen (the Duo will adjust accordingly depending on your usage), drag and drop apps to whichever screen you prefer, or even set an app to “span” both displays by long pressing and dragging to the hinge. In the case of Instagram, spanning effectively puts the Duo into landscape mode, with images in your feed appearing at full-screen width. The Duo is compatible with Microsoft’s Surface Pen (available separately), so you can scribble notes or doodle on one display while listening to music, or streaming a video on the other.

As this is a Microsoft product with an Android heart, the Duo will ship with a bunch of pre-loaded apps from both companies, and none I’d deem bloatware. So you’ll have the usual suite of necessary Google mobile apps (Gmail, Search, Drive, etc.), alongside Microsoft’s own, including Office, Outlook, Teams, and more.

If any of the above has whet your appetite for Microsoft’s unproven, but exciting Duo, then you’ll be pleased to know pre-orders are live right now at BestBuy, AT&T, and the Microsoft Store. But you’ll have to exercise a wee bit of patience since the Duo isn’t set to ship until September 10th. When it does hit retail, however, you won’t find it locked to any one carrier. The $1,399 (starting) Duo is compatible with Verizon, AT&T, and T-Mobile.

Are you willing to risk it?