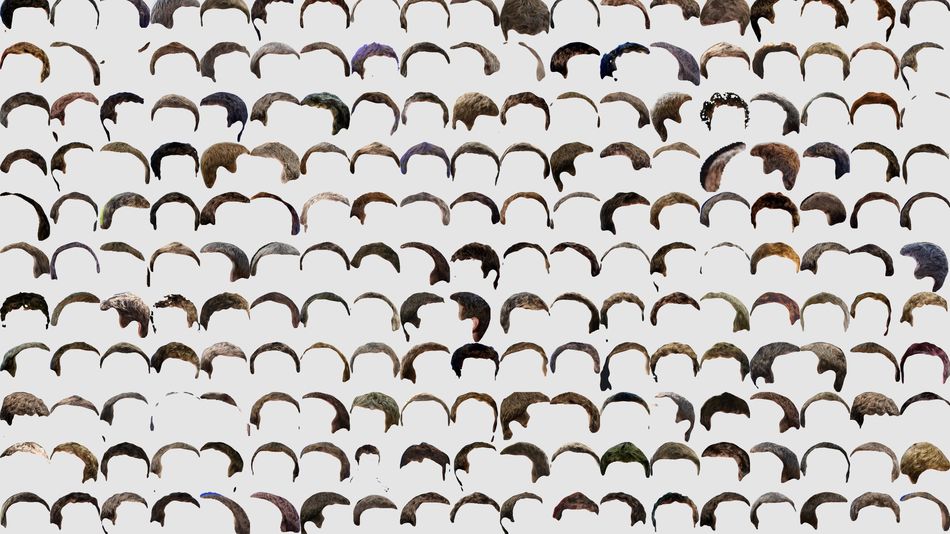 Even the most commonplace of objects, sufficiently decontextualized, has the power to take on new meaning.

We see this, perhaps most famously, with Marcel Duchamp’s “Fountain.” The so-called readymade sculpture was in fact simply a signed urinal. However, in part by separating it from the whole, Duchamp challenged his audience to see the porcelain as art. This, naturally, brings us to the recently created archive of Mark Zuckerberg’s haircuts.

Created by Sam Lavigne, an artist whose work focuses on automation and surveillance (among other things), the archive consists of 387 machine-learning generated images of Mark Zuckerberg’s hair. To isolate just the CEO’s mop, Lavigne used an “open source hair detector” available on GitHub.

“Mark Zuckerberg is one of the richest people in the world,” Lavigne told us over Twitter direct message. “He has nearly limitless haircut options — haircuts we can’t even begin to imagine. Yet he has chosen that haircut. Why?”

Just discovered an open source hair detector and have used it on hundreds of images of Mark Zuckerberg to build what I believe is the most comprehensive archive of Zuckerberg haircuts in existence. Thank you AI researchers! pic.twitter.com/QJqXLAbqyw

The fascination with Zuckerberg’s haircut is not limited to Lavigne. In fact, the topic received national attention during an October Congressional hearing. Zuckerberg was ostensibly in front of Congress to talk about Facebook’s cryptocurrency project Libra, but California Rep. Katie Porter noticed that commenters on Facebook couldn’t help but focus on something else.

“Mr. Zuckerberg, I know Facebook can be sometimes an unkind place, um, both toward my personal appearance and today apparently towards your haircut,” Porter told the Facebook CEO. “But as the mother of a teenage boy I just want to say thanks for modeling the short cut.”

Mark Zuckerberg, both his haircut and his general visage, have long been a point of interest for the media, general public, and scholars — the latter best exemplified by the . Launched in 2017 by Tim Hwang, the journal offers up “an academic examination of the visual culture of Mark Zuckerberg.”

It challenges the reader to view photos of the CEO as more than awkward moments captured by an in-house photogra pher or photojournalist. In part, the journal seeks to highlight and find meaning in the contradictions inherent in so much of what Zuckerberg does. One entry, “Sweaty Zuckerberg and Cool Computing,” does this particularly well by calling out the CEO’s hoodie and a message printed on its inside, hidden from view: “making the world open and connected.”

The entire thing is utterly fascinating.

SEE ALSO: Mark Zuckerberg took his VR avatar to Puerto Rico, and it was just so awkward

Notably, from its potential to detect cancer to its tendency to repeat and magnify human biases, the value of machine learning often changes depending on the context. Much like Duchamp’s “Fountain,” whether Lavigne’s collection of Zuckerberg haircuts deserves to be pissed on or viewed as art is up for grabs. Either way, it certainly has our attention.