In 2018, Girl Scouts of the USA announced a new set of STEM-oriented badges, including three cybersecurity challenges. Now, the largest Girl Scouts council in the DC area, Girl Scouts Nation’s Capital (GSNC), is working with Hewlett Packard Enterprise (HPE) to take its troops’ cyber skills to the next level.

Junior Girl Scouts ages 9-11 in the 60,000 member strong organization will be able to play a custom-made game to learn about privacy, online identities, security, and cyberbullying. Once they complete the game, they’ll earn a decidedly analog new HP Cybersecurity patch.

“As we look at the world around us, and how much happens online, and how early on kids are engaged online, I think this does become a set of fundamental life skills,” Liz Joyce, HPE’s chief information security officer, told Mashable over the phone.

HPE created the game along with Romero Games to model real-world scenarios. Called Cyber Squad, the game teaches kids about the concept of a “digital footprint,” online safety, privacy, security, and cyberbullying.

“Since we are talking about working with kids, we all know that kids find stuff way more memorable if it’s fun and exciting,” Joyce said. “It was important to us that this was a fun, interactive experience that would hit the right note with the girls.”

Cyber Squad came about when a GSNC troop leader — who happened to be married to an HPE executive — said she wished she could help teach her 9-11-year-old troop members more about cybersecurity. These pre-teens were becoming more autonomous digital citizens, and the troop leader felt they needed more guidance.

GSNC expressed interest, so the HP executive tapped Joyce (who is also the mother of a Girl Scout), to lead the project. She said her daughter and her friends finally understand what she does for a living — and actually think it’s cool.

More importantly, she’s seen the kids grow in confidence as they take the lessons from the game and explain cybersecurity concepts to their friends and peers in their own words.

“All of a sudden they felt confident enough to explain it to somebody else in their own words,” Joyce said, recalling some of the game’s tests. “That translation, hearing that they absorbed it and they were confident to talk about it, was a really important thing.”

The Girl Scouts USA launched 30 new STEM-related badges in July 2018. The HP patch is a regional achievement, but Joyce hopes that they’ll be able to bring the game and the nifty patch to more troops around the country, and, hey, even to the Boy Scouts.

“These are fundamentals that don’t just apply to girls,” Joyce said. “Girls, boys, frankly adults. There’s no shortage of need for this.”

A game might sound like a cheeky way to tackle a serious issue, but Joyce said positioning this as a game sparked interest and long discussions amongst the 9-11-year-olds about how to improve bad passwords or what to do if they see cyber-bullying.

Learning to set the table, pitch a tent, and sell countless delicious Thin Mints are still important skills for any Girl Scout. Being a cyber pro, however, is fundamental. 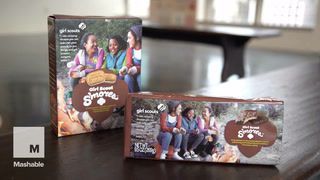 Save 30% on Sophos Home Premium cybersecurity