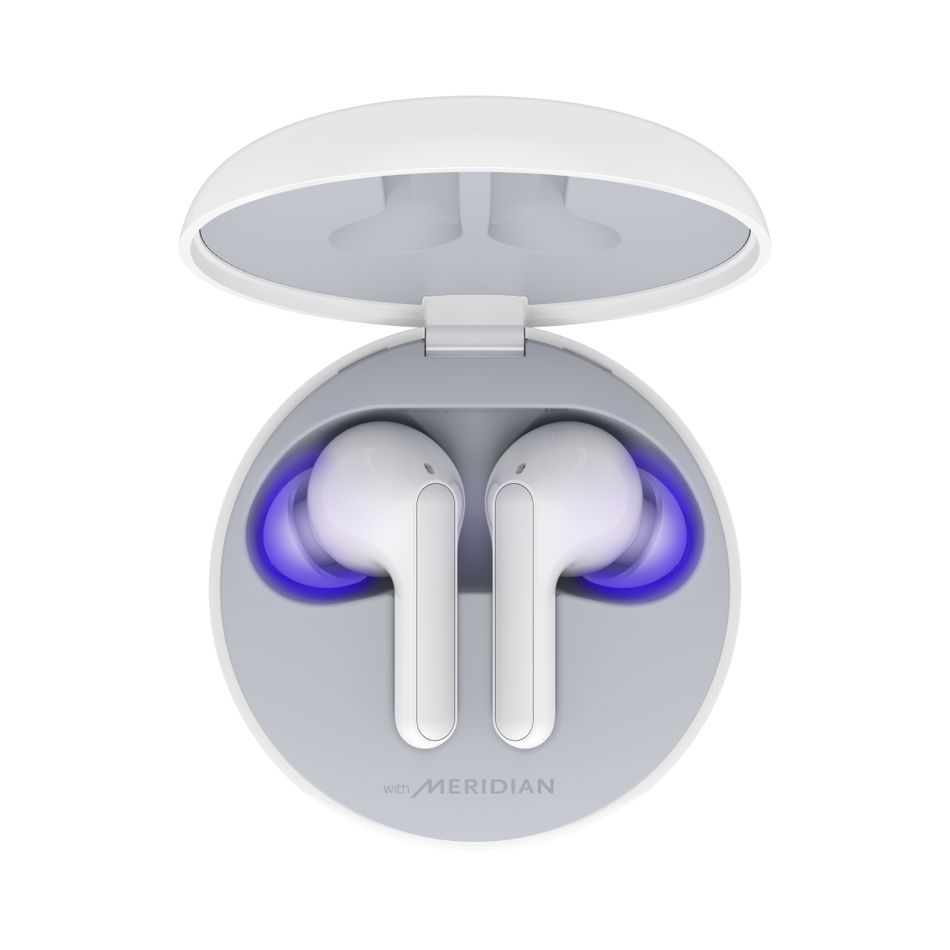 LG’s Tone Free earbuds are worth your consideration if you don’t want to pay for Apple’s AirPods. But the novelty of a germ-killing charging case doesn’t completely make up for merely OK sound quality.

You’re probably more acutely aware of the germs around you now than ever before — and there’s good reason for that. It’s a kind of hygienic vigilance that LG’s new Tone Free wireless earbuds are tailor-made for, thanks to one timely, new feature.

You see, these AirPods alternatives have a UV light in the charging case that LG claims will kill bacteria and germs while the buds charge. (When I said timely, I meant timely.) That’s a neat hook, to be sure, but LG’s new earbuds also have to actually work as earbuds to make the $149.99 investment worthwhile.

So are LG’s Tone Free earbuds the future of wireless earbuds, a gimmicky mess, or something in between? Let’s find out together.

The most eye-catching thing about the new Tone Free earbuds is the claim that its charging case can kill up to 99.9 percent of bacteria on the speaker mesh using UV lights.

First, you need to know that this feature only activates when you put the earbuds inside the case while the case is plugged in and charging. This feature doesn’t work on the go, presumably, to maintain the advertised 12 extra hours of battery inside the charging case.

This UV feature also isn’t meant to clean visible earwax or other gunk off of the earbuds. You’ll have to do that yourself. Instead, it’s meant to kill microscopic germs and bacteria that I was not equipped to observe during the review period. So I can’t judge its effectiveness in that sense, but Dr. Amesh Adalja from the Johns Hopkins Center for Health Security gave a blunt assessment of the general usefulness of this type of feature.

“I wouldn’t necessarily buy a UV earbud if it cost more money,” Adalja said. “I don’t think that this is a major risk for infection.”

UV radiation is used to neutralize bacteria in places like hospitals, but that doesn’t mean it’s going to save your life with a pair of “clean” earbuds. COVID-19, in particular, is a respiratory illness that transmits through the mouth and nose more than the ear. In other words, while LG’s device may do its job to some extent, there are too many other factors at play, as well as easier cleaning solutions to make UV sanitization the sole selling point of these earbuds.

So now, with that out of the way, let’s talk about how LG’s buds actually work as, well, earbuds.

The Good: Comfortable, noise-isolating, and accommodating

There are more important things to consider about a pair of earbuds than just their appearance, but you can’t pretend like that doesn’t matter. You don’t want to look like a goober walking around with something goofy sticking out of your ears. Right away, LG’s new Tone Free earbuds make a nice first impression with sleek looks and ace comfort.

At the risk of sounding reductive, the model LG sent me looks like matte black AirPods, but with the kind of silicone ear tips you would find on AirPods Pro or, well, most other earbuds. There’s also a glossy white model, if that’s your thing. Either way, anyone who has ever used Apple’s AirPods can take solace in the familiar here. That means you’ll have a little stem peeking out from your ears when you wear LG’s earbuds.

I didn’t have any AirPods Pro on hand for a direct comparison during my review period, but the Tone Free earbuds are more comfortable than regular AirPods by a decent margin. The silicone ear tips kept them securely in my ears in a way the default AirPods never did when I used them regularly. That snug fit combines nicely with an overall excellent level of comfort. You’ll barely notice these while they’re in your ears.

There isn’t, but that’s fine, in this case.

My actual favorite thing about the Tone Free earbuds is the accompanying mobile app. It’s available on both iOS and Android, and it’s the only way to adjust settings for the earbuds. Unlike some of the super basic earbuds apps we’ve seen recently (looking at you, Microsoft), there’s a lot to like here. It’s got a litany of toggles and sliders to play with, so you can customize these earbuds to your liking.

By default, touch panels on the earbuds can play or pause with a single touch, adjust volume with two touches, or skip tracks with three. A long press turns on ambient sound mode, which we’ll get to shortly. You can remap the double and triple taps to do things like rewind or take voice commands from Siri using the app. And you can remap those commands on both earbuds.

The app also comes with four different sound equalizer settings for different listening experiences, as well as two slots for custom equalizer builds. You can lock the touch panels, adjust ambient sound, and even make each individual earbud play a loud noise in case you lose one. I’m not a huge fan of using apps to change settings on headphones in general, but if it has to happen, all apps should be as comprehensive as this one.

You may have noticed I haven’t really addressed sound quality when talking about the good parts of the Tone Free earbuds. It’s not bad by any means, but LG’s earbuds don’t pack much of a punch in the audio department.

The main issue is the underwhelming bass output. You can tweak this some using the app’s equalizer settings, but even the “Bass Boost” mode is weak. It simply doesn’t slap the way it should. The overall audio output is passable, but it never crosses into a territory beyond that. It’s perfectly fine for going on a walk or run. But if I’m stationary, I want something with a little more kick to it.

The only other real knock I have against these buds is the ambient sound mode. It’s activated by a long press on either earbud’s touch panel, and basically all it does is use the onboard microphones to amplify sound around you when you aren’t playing a song or podcast. To be perfectly clear: This does not affect audio quality during playback. It’s just when you pause.

At its default setting, it sounds like you’re listening to a too-loud and crunchy audio recording of your immediate surroundings. It’s like having a hidden mic in your head. I know I complimented the ear tips’ noise reduction earlier, but they don’t do such a great job that you can’t hear the world around you when you pause your favorite song. You can adjust the ambient noise mode using a slider in the mobile app, but you’re probably better off just never using it.

In terms of price, the closest direct competitor for the new Tone Free earbuds would be Apple’s regular AirPods. Those start at $159.99, but don’t have silicone tips for comfort or a UV light in the charging case for disinfection. That said, Apple’s buds don’t skimp on sound quality.

LG isn’t the only company making wireless earbuds that come with a UV light to blast away bacteria, but the competition isn’t especially fierce, at least not in the U.S. The Tronsmart Onyx Free wireless earbuds are a budget model with UV sterilization, while the Philips ActionFit earbuds with UV cleaning are about $160.

You might be better off getting a standalone UV cleaning kit for all of your devices, but be warned that it won’t be especially cheap. UV sterilization devices like this $125 one from Link can easily cross the triple-digit price barrier. In this sense, what LG is selling is a pretty good value.

LG’s newest offering is a pretty standard pair of earbuds that only sound OK and don’t have much in the way of unique playback features. They’re certainly handsome, comfortable, and accommodating thanks to a mobile app with an impressive number of customization options. Plus, even without active noise cancellation, they do a pretty great job of drowning out unwanted noise. But not so much that you should be tempted to use the included ambient noise mode.

The fact that the charging case claims to purge germs from the speakers with UV light is the only unique selling point here. But as we covered earlier, that feature might bring you more peace of mind than tangible results. Even if that feature may not be a literal life-saver, the fact that these still cost less than the cheapest AirPods means it doesn’t really matter.

They may not do much to separate themselves from the competition aside from putting a bacteria-killing light in the case, but LG’s Tone Free earbuds have enough going for them that they’re worth putting on any affordable wireless earbuds shopping list.