It seems cheesy, but once you’ve got it set up, this is the only way to have a road trip singalong. It’s your voice actually singing along with the music from your phone’s music app. But you better know all the words, because the microphone doesn’t display lyrics for you.

With the California coast to my right and bountiful produce fields to my left, I belted out, “Tell me more, tell me more!” I was driving down California’s famed Highway 1 with a group of friends, and the traffic was slow enough for me to channel my inner “Carpool Karaoke” moment.

James Corden — the late-night show host whose segment “Carpool Karaoke” on The Late Late Show with James Corden has attracted stars like Adele, the Jonas Brothers, and Madonna to sing along to their top hits while driving around with Corden — wasn’t in the car belting out tunes with me and my passengers. But we managed thanks to a glammed-out microphone my road trip crew had connected to an open radio channel so our voices could boom through the car’s speakers.

This was Carpool Karaoke The Mic.

After connecting my iPhone’s Bluetooth to the car sound system, we sang along to favorite songs playing through Apple Music. Even when we momentarily lost cell service, the saved songs downloaded to my account still worked. The Bluetooth cut out a few times, but we quickly reconnected and continued crooning.

There were some awkward moments, however, when the microphone would blast Corden saying, “Do you mind if we listen to some music?” as the device paired.

The driver is explicitly told not to participate — “The Mic is intended for passenger use only!” chastise the instructions on the device made by The Singing Machine and CBS — but in some slow traffic, I took over and sang along to “Summer Lovin'” from Grease. I know all the words, so I could keep my eyes on the road.

But for others in the car, the lyric-less device (we thought the microphone screen would post the lyrics, but it was just the tuner for the radio) was a bit frustrating. My friend pulled up lyrics on her smartphone. Recommended for the next time: Download a karaoke app to accompany the microphone.

In preparation for the trip, I had charged the microphone in my living room, self-consciously laughing it off as a silly prop that we’d try out and make fun of. But even though Initially the microphone seemed like a chintzy toy, after we set it up and got going, it provided high-quality entertainment on the drive from Santa Cruz to Monterey, California. And with its six-hour battery life, we weren’t worried about draining the mic.

I recommend doing this in a group, as it created a fun, private-room karaoke atmosphere for the four people in the car; if it was just a friend and me, it could’ve veered into cheesy and awkward. For passersby, we must’ve looked like the most committed road trip crew.

On the way back we were all a bit hungover from too much celebrating, so the microphone stayed in the box, but I’m convinced it would’ve lifted our spirits as we sang along to “Let It Go” and the Backstreet Boys.

The microphone came out last month and is available online at Amazon, Walmart, and Target, and in-store at Best Buy for $59.99, which is quite the price tag for a road trip companion compared to singing along to the radio or your own playlist for free. But that’s what carpooling is for — you can split it among your fellow passengers. 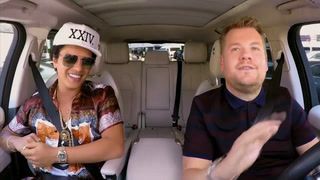