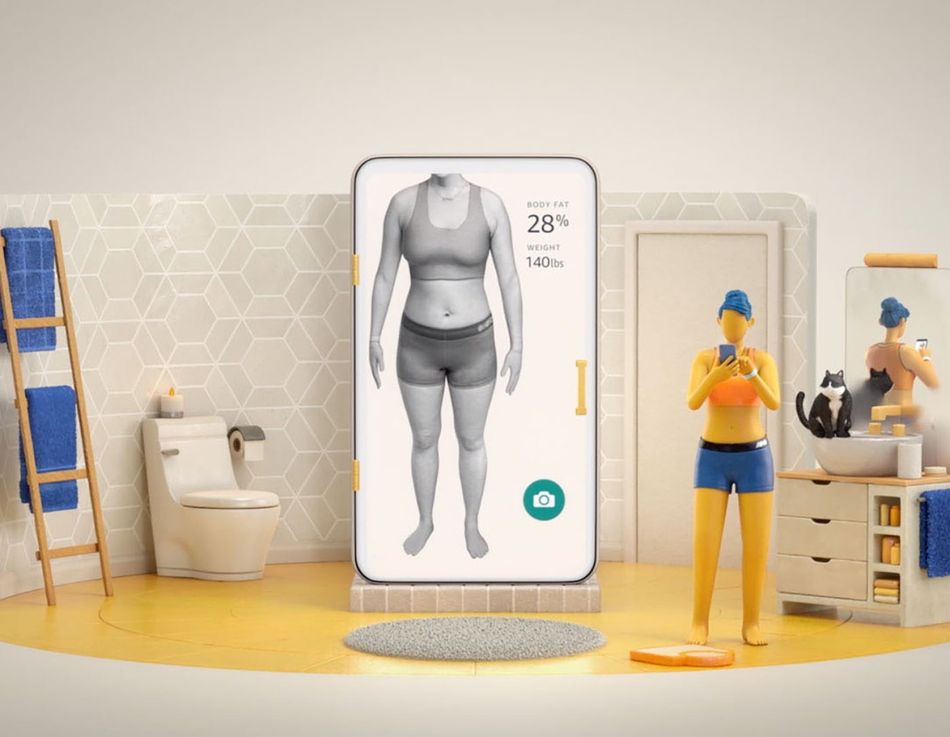 Amazon knows your shopping secrets. Now it wants to collect data on your body fat and emotional state.

The company announced the launch of a new fitness band and companion app Thursday that it’s calling Amazon Halo. Like competitors Apple Watch and Google-owned FitBit, it measures things like activity, sleep, and other health metrics. But it goes much further.

Amazon says that it can measure your body fat percentage just through photos. Using the full-body selfies you submit to the app, it can create a “3D body model” that it recommends re-doing every two weeks. That measurement will also tell you how your body fat compares to other people of your sex and age according to “medical literature.” You can use a slider to “visualize” what you would look like with more or less body fat.

Its second distinctive feature is that it measures the tone of your voice, or how energetic and positive you sound. It’s supposed to help you reflect on your interactions with other people to understand how you’re coming off in conversations.

First, you create a “voice profile” so that your Halo can recognize when you’re talking. Then, Amazon says that Tone runs “passively and intermittently in the background…Throughout the day, it will take short samples of your speech and analyze the acoustic characteristics that represent how you sound to the people you interact with.” You can also get “continuous tone analysis” for a conversation of up to 30 minutes if you press a button to “bookmark” an interaction you’re having with another human being.

Let’s just get this out of the way: these features sound creepy as hell. Who is the person just dying for an eavesdropping robot on their wrist to tell them how happy they sound while chatting with friends? Is the goal to sound happier, more energetic, all the time?! WHY?

And, excuse me, Amazon, but why would I want to create a 3D model of myself that exists in the Amazon cloud? It seems like that would encourage a negative body image and obsessive thinking (especially with that comparison feature).

On the other hand, we gotta acknowledge that a lot of the AI technology Amazon Halo relies on sounds pretty cool. Measuring body fat usually involves sending electrical pulses through your body on specialty smart scales. Amazon says it can do it with just your pictures.

But just because Amazon can doesn’t mean anybody should.

Amazon has been making inroads into the health industry for some time. It already analyzes and stores health data for hospitals. It acquired prescription delivery service PillPack, and it’s launching an insurance venture with Berkshire Hathaway.

So Amazon clearly has big plans for healthcare. But how does Halo fit into them? Yes, it gets money from the fitness tracker and the subscription fee of $3.99/month. But given Amazon’s reliance on collecting mountains of information to sell products, you can bet data will have something to do with it.

That’s especially true since your Amazon Halo account is linked to your Amazon Prime account. So data about your fitness and engagement with the app is quantified alongside information about past purchases.

Amazon has built in a few important privacy features, and, of course, insists that Halo is dedicated to privacy. Most crucially, data is encrypted when it’s moving between your device and your smartphone, and you can download and delete your Halo data at any time.

Additionally, Amazon says the most sensitive data — your voice recordings — never leave your device and are deleted immediately after processing. Similarly, Body Scan images are supposedly deleted from Amazon’s cloud after they’re processed, and only live on your device (unless you enable cloud backup).

But aside from the raw voice and image files, what about the data related to your mood and emotions? How about your fluctuations in body fat? Amazon told Mashable that data related to users’ body fat and tone will not be used to make shopping recommendations.

Halo’s privacy policy, however, does say Amazon “can collect information relating to your fitness metrics, body fat composition, demographic data, sleep, and tone of voice,” but does not clearly specify what it will do with that data. It merely says: “This helps us improve the Halo service to provide features and content that are most useful for customers.” Amazon wouldn’t explain further when contacted by Mashable.

We know that Amazon uses our data to sell us things. Its cloud storage systems have been at the root of multiple third-party data breaches. Add that to the numerous privacy questions around its Echo inappropriately listening to users (including kids) and collecting voice data. Is this the company you want knowing how often you go for a run, when you go to sleep and when you wake up, whether you’re gaining or losing weight, and how damn happy you are?