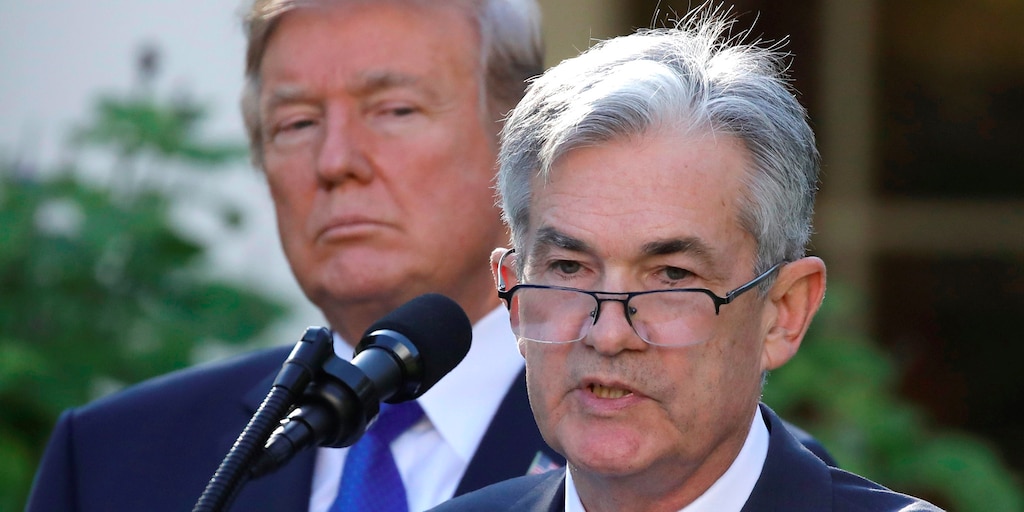 Where is he from: He was born in Washington, DC, and spent most of his career between the capital and New York City.

How did Powell get to where he is now?

President Trump strayed from norm when he nominated Jerome Powell to run the Federal Reserve in November as he overlooked Janet Yellen, the current chairwoman at the time, for a second term.

Powell has been a member of the Fed’s board of governors since May 2012, when President Barack Obama nominated him to fill an unexpired term. He was reappointed in 2014 to complete a 14-year term ending in 2028.

Before joining the Fed, Powell was a visiting scholar at the Bipartisan Policy Center in Washington, DC, a think-tank that promotes collaborative work between Democrats and Republicans.

He also spent eight years at the Carlyle Group, a private-equity firm with more than $200 billion in assets under managements. Much of Powell’s $112 million net worth comes from his time at Carlyle.

Powell officially took over the Fed in February 2018 to serve a four-year term.

Over the last several months, Powell has had to grapple with not only concerns of a slowing global economy, but political pressure from President Trump to cut interest rates. The President has repeatedly claimed he has the power to fire Powell, if he should choose to.

Trump has complained over the Fed’s hesitation to raise interest rates in the face low inflation. Powell appeared before congress earlier this week to talk about the state of US monetary policy.

When asked during the testimony what he would do if President Trump called him and said he was fired, his response was: “My answer would be no.”

“What I’ve said is that the law clearly gives me a four-year term and I intend to serve it,” Powell said when asked by US Representative Maxine Waters if he thought Trump had the authority to fire him.

Powell and the monetary-policy decisions he’s made on behalf of the Fed have been arguably the biggest driver of stock-market fluctuations over the past 18 months. Equities have been taking their cues from the Fed during that time, for better or for worse.

Take the February 2018 stock-market correction, for example. While a big fuss was made about the collapse of an unsustainable volatility trade, ground zero for the sell-off was the blockbuster jobs report for January.

The US economy added way more jobs than expected, and wages rose at their fastest pace in a decade. That fueled speculation that the Fed would hike interest rates at a faster pace than previously indicated, a dynamic that would make bonds more attractive compared to stocks. So equities sold off — and hard.

Then, ahead of the so-called Red October for stocks, Fed Chair Jerome Powell catalyzed another correction, this time with his words. He said the central bank was a “long way” from neutral on interest rates, sparking more concern about a faster path for rate hikes.

But Powell can also be a market ally. In late November, he said rates were “just below” a neutral level, which sent the Dow Jones Industrial Average surging 600 points, its biggest increase in eight months.

The tide turned once again in December, when Powell delivered a message that was much more hawkish than the market expected, which sent stocks plunging, nearly derailing the S&P 500’s pristine bull market run.

Then, in January, he shifted back into a more accommodating dovish position, which sent stocks soaring to new records and their best start to a year on record.

While Powell is technically a Republican, he’s also been described as a centrist and a pragmatist, according to The New York Times.

When Powell was unexpectedly nominated, he was seen maintaining the current path of monetary policy from his predecessor, in the even the economy kept growing. The unknown at the time was how Powell would respond if the economy began to slowdown.

During his time on the Fed’s board of governors, Powell often voted in-line with Yellen to steadily increase interest rates and to unwind assets from the central bank’s balance sheet that were bought after the 2008 Financial Crisis.

In the past, Powell has also expressed concerns about the steps the Fed took after the recession to rebound the economy.

Wall Street is expecting the worst this earnings season. But Bank of America says traders will be pleasantly surprised.

Roku has skyrocketed 240% this year. We spoke to 3 experts about why, and what investors should be looking for in the future.

Leaked memo shows how Deutsche Bank spared its research department, even as the industry braces for a brutal future