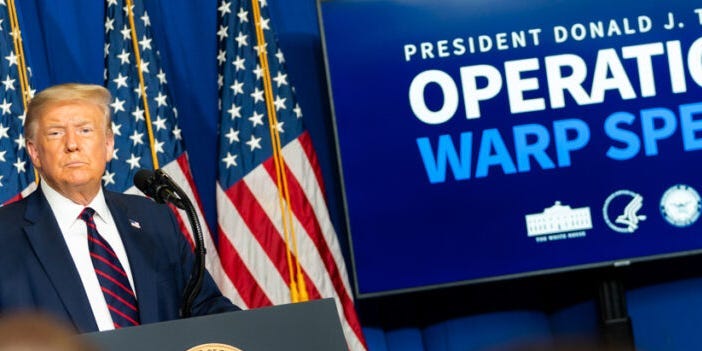 The Trump administration has laid out an extraordinarily ambitious timeline for a coronavirus vaccine.

Operation Warp Speed, the government’s initiative to speed up vaccine work, say it’s aiming to deliver 300 million doses of a safe and effective shot by January 1. Creating a vaccine in less than a year would be an unprecedented feat—under normal circumstances, it can take a decade to develop a new vaccine and bring it to market.

But even if Warp Speed accomplishes this goal, most of us won’t be getting coronavirus vaccines in January. When administration officials talk about Warp Speed, they usually don’t mention that it will take months to distribute the shots across the nation.

Here’s how the US health department describes Warp Speed, for example: “Operation Warp Speed aims to deliver 300 million doses of a safe, effective vaccine for COVID-19 by January 2021.”

But factoring in the time to distribute the vaccine and give it to millions of people, Operation Warp Speed won’t really deliver those 300 million doses to individuals until roughly March 2021, administration officials acknowledge.

Read more: There are more than 160 research programs hunting for a coronavirus vaccine. Here’s how the top drugmakers see the race for a cure playing out and when the first shots might be available.

The document, which we annotated below, claims that Warp Speed’s mission is to “Deliver 300 million doses of safe and effective vaccine by 1 January 2021.” But it also shows shows how the entire process will take 14 months to complete testing, manufacturing, and distribution of a vaccine, a timeline that would stretch into March.

To be clear, distributing hundreds of millions of doses of a coronavirus vaccine by next March would be an unprecedented feat. Achieving that goal depends on a lot going right, including success in clinical studies, ramping up manufacturing, and logistical execution to distribute the shots across the nation.

As it stands today, none of the coronavirus vaccine candidates that drugmakers are working on have shown that they can actually prevent infection or disease. Large-scale trials have started in recent weeks on vaccines from Moderna, Pfizer-BioNTech, and AstraZeneca, with results likely to come later this fall or winter.

In a best-case scenario, in which several of these leading vaccine candidates work, Stephane Bancel, the CEO of Moderna, recently estimated that young and healthy people would likely receive their shots in spring 2021. If any of the leading shots fails in clinical trials, Bancel told BI the timeline could be pushed into the second half of next year.

Read more: Moderna’s CEO shared a detailed timeline for when we’ll know if its coronavirus vaccine works, and cautions that you might not get a shot until the spring

It’s important to be realistic about the timeline for a coronavirus vaccine, particularly as the US public health response has become increasingly dependent on a vaccine to curb the pandemic. Shortcomings in testing, mask-wearing, and social distancing have laid bare the need for a vaccine, as more than 1,000 people in the US have died each day from the coronavirus in recent weeks.

Some top drug industry CEOs have emphasized the need for caution on the most aggressive timelines, too

Roche CEO Severin Schwan said in April that a vaccine will “most likely” not be ready before the end of 2021. Novartis CEO Vas Narasimhan said Thursday at a Bloomberg News event that he has “reasonable confidence” a vaccine could be broadly used by the end of next year.

Roche isn’t working on a coronavirus vaccine, while Novartis is involved in an early-stage vaccine project. The CEO of Merck, a drugmaker with a long track record of creating vaccines, has also urged people to be realistic about the timeline.

“I think when people tell the public that there’s going to be a vaccine by the end of 2020, for example, I think they do a grave disservice,” Kenneth Frazier, Merck’s CEO, said in a recent interview with Harvard professor Tsedal Neeley. “We don’t have a great history of introducing vaccines quickly in the middle of a pandemic. We want to keep that in mind.”

Merck is working on a coronavirus vaccine of its own, but hasn’t provided a detailed timeline.

Read more: The first look at human data from the coronavirus-vaccine front-runners is in. Here’s how Pfizer, Moderna, and AstraZeneca stack up as they race to have their shots ready this fall.

We asked the Trump administration to clarify Warp Speed’s goals

Business Insider asked Trump administration officials in recent days to clarify Warp Speed’s goals, because the recent timeline isn’t the only instance in which the administration has been unclear. For example:

In response to our questions, administration officials confirmed that it will take months after January to accomplish Warp Speed’s goals of injecting 300 million vaccine doses into people.

Here’s how NIH head Dr. Francis Collins put it, in response to a question about the timeline:

“That last three months is distribution of 300 million doses,” Collins said. “That is the process of getting a dose to every American, which we didn’t expect we could do by the first of January. That’s going to take the additional three months to do so.”

What time do voting polls open and close? A state-by-state guide