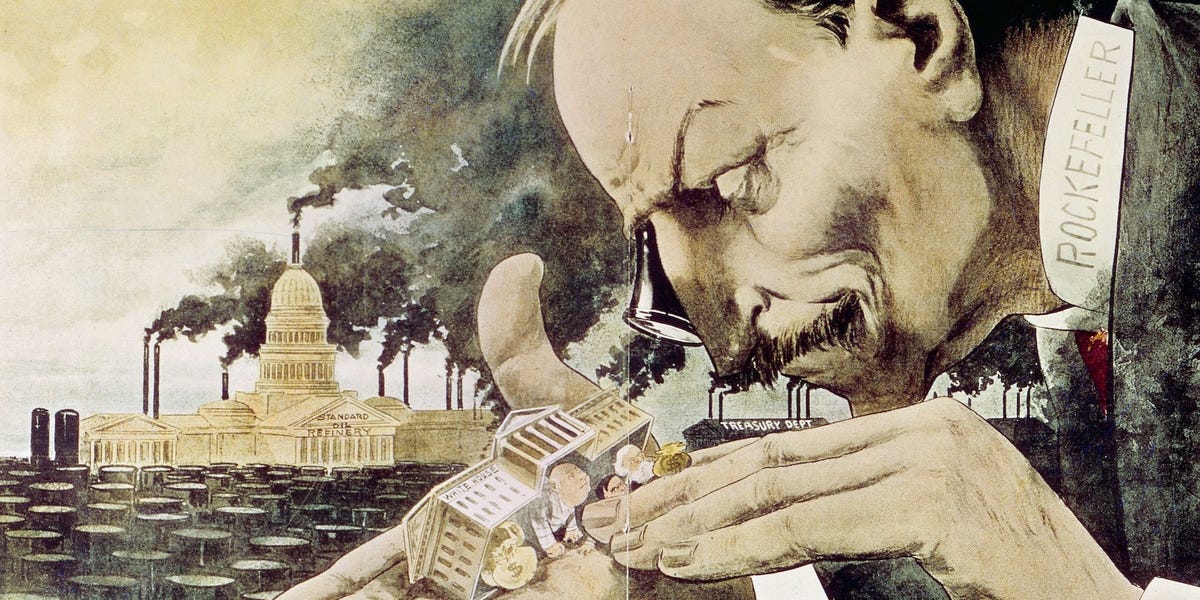 The CEOs of Apple, Amazon, Google, and Facebook were grilled in front of Congress on July 29 over whether they violate antitrust regulations.

The law term “antitrust” has a long history in the United States, and the hearing was part of a probe into online market competition. Lawmakers will attempt to determine if antitrust regulations can be applied to four large tech companies that dominate the industry.

But let’s back up a bit: What does “antitrust” mean?

Around the turn of the 20th century, “trust” was used as a term to describe a new type of large corporation, as American business titans in the steel, oil, railroad, and banking industries began to form larger conglomerates. For example, the railroad sector needed corralling as hundreds of smaller railroad operators were acquired and clumped together into mega-companies. Another example was Standard Oil, a major oil monopoly, or trust, run by John D. Rockefeller starting in the late 1800s and into the 20th-century.

And so regulators sought to establish laws to keep big businesses across every sector from growing too large and powerful and to maintain a healthy amount of competition in the market.

Trust: This term refers to the big businesses (in this case, in railroad, oil, and steel) that began to form and encroach on smaller competitors in the US

Antitrust: The term that was given to the “trust-busting” set of laws that were created to counteract that encroachment and stem the corporations’ growth in size and power

Here’s what they do, according to Investopedia:

Sherman Act of 1890: This is the backbone of American antitrust policy. It allows the federal government to take companies to court that it believes are participating in anticompetitive practices and abusing their monopoly power.

Clayton Act of 1914: This act was passed to fill in the gaps left by the Sherman Act. It prohibits certain business practices that can weaken economic competition, like anticompetitive mergers and acquisitions or price-fixing.

Federal Trade Commission Act of 1914: Similar to the Clayton Act, this one was passed to further round out antitrust legislation and banned more competitive practices that were deemed unfair or deceptive, such as those that violate consumer protection laws.

How have these laws been used to rein in US businesses in the past?

The Sherman Act was used to break up Standard Oil, which was found to have lowered their prices specifically to drive their competitors out of business, in the early 1900s. The trust was divided into dozens of companies, including what are now ExxonMobil and Chevron.

In 1969, the US Justice Department filed a lawsuit against IBM, the New York-based tech firm whose computer market dominance put it on the government’s radar. However, the case was thrown out.

In 1982, the US under President Reagan used the Sherman Act to divide phone service goliath AT&T, or “Ma Bell,” into eight different companies, or “Baby Bells.”

And in the late 1990s, Microsoft was hit with an antitrust lawsuit as Internet Explorer began to dominate the internet browser market by bundling its browser with Windows software, making it difficult for Windows users to install and run competing browsers. A federal judge ruled that the company was indeed in violation, and the company settled in 2001, but it was a pivotal moment for the tech industry as its players began to realize they may have to eventually reckon with oversight from Uncle Sam.

Why is it bad if companies break antitrust laws?

The main reason, economists say, is that healthy competition is key to a steady, thriving economy, one in which small business owners and consumers benefit. If big businesses squash out smaller competitors, and the market is instead ruled by a small number of monopolies, that could result in a shaky economy. Consolidating economic power into a handful of companies could also be dangerous to the nation’s democracy, as Wired notes.

So what’s the parallel between tech companies and the big businesses around the turn of the 20th century?

Google, Amazon, Apple, and Facebook — the world’s most powerful tech companies — are being investigated over business practices designed to step on smaller competitors and maintain their dominant position in the marketplace. They’re all being investigated over antitrust violations, but they’re not necessarily being probed for the same thing:

Google: Lawmakers questioned CEO Sundar Pichai regarding the company’s iron grip on the advertising and search market and how it has affected other online businesses.

Amazon: The Seattle-based firm is being probed over whether it promotes its own brands ahead of third-party sellers on its online marketplace.

Apple: CEO Tim Cook fielded questions regarding claims that the company gives its own apps special treatment over third parties in its App Store.

Why are antitrust laws difficult to enforce in tech?

Simply put, these laws were created in the late 1800s and early 1900s. Retrofitting the century-old laws — or creating new ones — to accommodate 21st-century companies offering products that are at the forefront of tech innovation won’t be an easy task.

There is also the issue that “anticompetitive” laws in the US need to show that consumers are being harmed, something much harder to do when it comes to big tech. Take the example of a search engine like Google dominating. When Standard Oil controlled the marketplace, consumers had only one option for where to buy. Google, meanwhile, wins because consumers mainly choose to use Google. Consumers aren’t being harmed – but other companies that want to compete against Google (or Apple or Facebook or Amazon) arguably are. The task in front of Congress is determining whether that’s enough to declare these tech companies in violation of antitrust regulation.

So then what’s going to happen?

As a direct result of the July 29 hearing, almost nothing. This isn’t a trial, and no one will be found guilty. The hearing was instead an opportunity for lawmakers to question the tech executives and gather evidence about their business practices by listening to their testimonies. The lawmakers involved in the hearing sit on the House Judiciary’s antitrust subcommittee, a group that has already been conducting a yearlong investigation into how companies operate in the digital marketplace. The subcommittee members have been speaking with smaller competitors, who have alleged that tech’s biggest firms engage in anticompetitive business practices.

The leaders of the “big four” tech companies attempted to make their case as to why they aren’t infringing on the competition. Their answers helped inform the subcommittee’s ongoing investigation, which could eventually lead to more specific legislation designed to keep tech companies from growing too large and powerful — just like how the three original antitrust laws began reining in big oil and big railroad over 100 years ago.