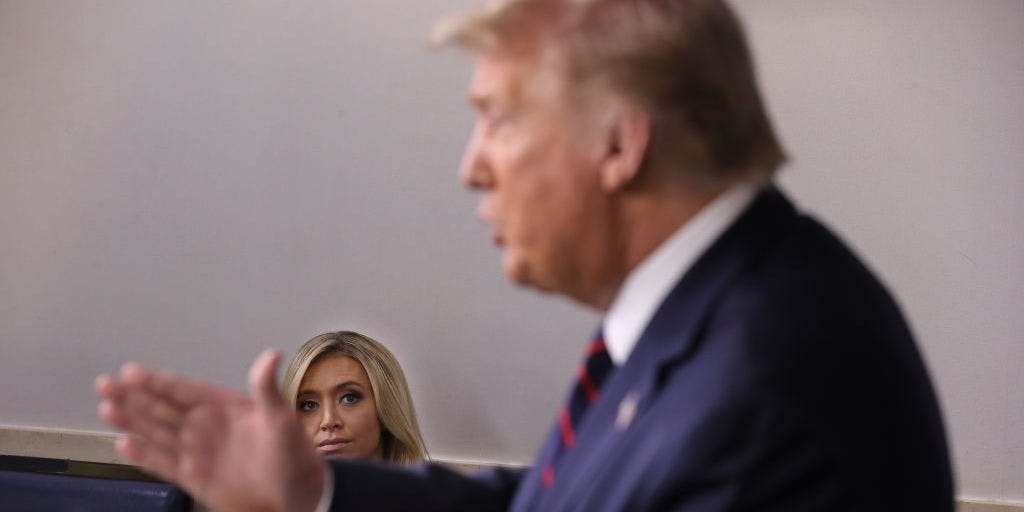 President Donald Trump contradicted a statement made earlier on Tuesday by his press secretary Kayleigh McEnany that he tests for coronavirus “multiple times a day.”

“I didn’t know about more than one,” Trump said during his first coronavirus briefing since late April in response to a reporter’s question about McEnany’s comments. “I do take probably on average a test every two days, three days, and I don’t know of any time I’ve taken two tests in one day, but I could see that happening.”

McEnany, who was sitting in the briefing room while the president made the correction, told reporters hours before that the president is the “most tested man in America.”

“He’s tested more than anyone, multiple times a day,” McEnany said during a press conference. “And we believe that he’s acting appropriately.

“I’m not going to read out exactly how many times he’s tested a day, but sometimes it is more than one time a day,” she added.

Her comments come as several states across the south and southwest face a surge in coronavirus cases and after criticisms have sparked over hours-long lines at testing sites, days- and even weeks-long waits to receive test results, and an insufficient number of tests available.

“I think we’re doing a tremendous amount of testing,” Trump said on Tuesday. “If the doctors and the professionals feel that — even though we’re at a level that nobody ever dreamt possible — that they would like to do more, I’m OK with it.”

Trump did not address a reporter’s question on whether he is in favor of spending more money on testing, though The Washington Post reported earlier this week that the Trump administration is seeking to cut $25 billion in testing from a new Republican bill.

Tuesday’s briefing was a marked difference from those that took place in March and April, which stopped shortly after Trump was widely derided for suggesting the possibility of injecting disinfectants into the body to stave off the virus.

Trump had held daily press conferences with members of the White House coronavirus task force to discuss the administration’s response to the pandemic, though some criticized it as unproductive when the president would occasionally lash out at reporters during them.

Trump expressed his issue with the briefing’s media coverage and deemed the regular conferences “not worth the time & effort!”

On Tuesday evening, no members of the task force were present, leaving the stage solely to Trump, though he mentioned chief medical officer Dr. Deborah Birx had been outside the room. He did not comment on infectious disease expert Dr. Anthony Fauci’s whereabouts.

Trump announced on Monday he is resuming the coronavirus briefings after a “big flare-up in Florida, Texas, a couple of other places.”

“We had very successful briefings. I was doing them, and we had a lot of people watching — record numbers watching. In the history of cable television — television, there’s never been anything like it.

“I think it’s a great way to get information out to the public as to where we are with the vaccines, with the therapeutics, and, generally speaking, where we are,” Trump added.

The press briefings, which are expected to continue for the rest of the week, also come after recent polls showed two-thirds of Americans do not trust the information Trump has on coronavirus and that the president’s approval rating has been plummeting.