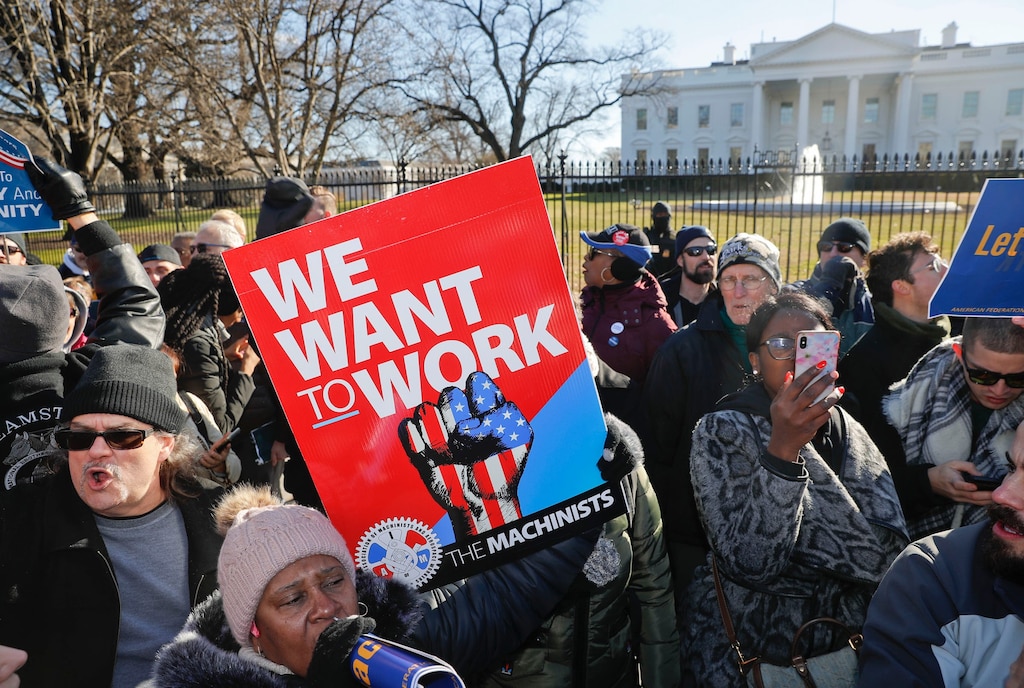 A partial shutdown of the federal government entered its fourth week Saturday, making it the longest on record. From jobs to food stamps, an impasse over border security has put large swaths of the economy in jeopardy.

“A short-term shutdown does not usually have a big economic effect,” said Donald Moynihan, chair of the McCourt School of Public Policy at Georgetown University. “But at this point we are looking at the longest shutdown in the modern era. We should be worried.”

Growth is expected to slip

Business activity was already expected to expand at a slower rate in coming months. But economists have further lowered estimates for quarterly gross domestic product, or the total value of the nation’s goods and services, since the shutdown began.

Federal workers missed paychecks that were due this week, a development that will complicate the lives of more than 800,000 and that threatens to weigh on gross domestic product.

Congress approved a bill Friday that ensures back pay for furloughed employees, but it must still be signed into law and would not be distributed until after the shutdown ends. In the meantime, reduced income will weigh on consumer spending, which accounts for about 70% of economic activity.

“Maybe you can make up for one missed paycheck,” said Brad Setser, who served as a White House and Treasury Department economist in the Obama administration. “But the longer the shutdown goes on, the harder it is for the government workforce to keep up with spending.”

Lower consumption will also hit the private sector, which faces its own direct risks from the shutdown. Uncertainty can delay investment. A lack of regulatory oversight can chip away at consumer confidence. And those who rely on federal services can lose customers.

“Hotels may start seeing fewer customers who don’t want to spend their time in trash-strewn national parks, or dealing with long lines at airports,” Moynihan said. “If you shut down one sector of the economy, you quickly learn how connected it is to other parts.”

Employment could fall for the first time since 2010

With about 380,000 workers placed on unpaid leave while a series of government agencies are closed, the Wall Street Journal reported the shutdown could upend the longest stretch of continuous job growth in history.

Since monthly payroll growth has averaged at about 215,000 over the past five years, the shutdown could in January cause overall employment to fall for the first time in 99 months.

The disruption is also making it more difficult to keep an eye on the labor market. For instance, economists don’t know why applications for unemployment benefits fell significantly more than expected this week.

“We don’t know if the consensus was high because forecasters believe that the trend in claims has risen, or because they feared a big hit from the government shutdown,” Ian Sheperdson, chief economist at Pantheon Macroeconomics, said in an email. “The uncertainty means that it probably would be sensible to view these numbers as an unreliable guide to the underlying pace of layoffs.”

A lapse in data has created uncertainty

With large portions of the Department of Commerce closed, some information on the state of the economy won’t be released during the shutdown. Many economists have forecast a recession could begin within the next two years, and a lack of data could fan fears about the possibility of a crisis.

It will also become more difficult for Americans to understand what’s happening in the economy, putting businesses at a disadvantage. Farmers who have already been reeling from the US-China trade war, for instance, are working without key figures on monthly international shipments.

“Trade statistics weren’t going to turn things,” said William Tyner, an agricultural economist at Purdue University. “But data is certainly better than no data. What farmers are going to have to do now is place bets on trade negotiations.”

The Federal Reserve could have trouble getting an accurate reading of business conditions, as the shutdown threatens to distort key economic figures. That comes at an already uncertain time for officials there, whose rate path has been shifting in light of stock-market turbulence, a global trade war, and fading stimulus.

“The tricky thing will be figuring out whether the dips in the numbers are just transitory effects of the shutdown, or portend a more persistent deceleration in the pace of economic activity,” said Ken Kuttner, a former staff economist at the central bank. “And making that distinction is especially important right now, since there were already some hints of a slowdown.”

US creditworthiness has been called into question

A prolonged shutdown could lead to a credit downgrade for the US, making it more expensive for Americans to borrow.

With mounting doubt about the government’s ability to resolve short-and long-term challenges, major credit-rating agency Fitch Ratings warned this week that the US could lose its AAA status if lawmakers fail to pass a budget and manage the debt ceiling.

“The more the dysfunctional the US government looks, the more likely it is that bond agencies will become tempted to downgrade its creditworthiness,” Moynihan said.

The housing market could falter

An already soft spot in an otherwise robust economy, additional obstacles in the housing market would likely leave economists concerned. Residential real-estate activity has been cooling off as tax laws, reduced construction activity, and higher interest rates compound housing shortages across the country.

“The longer this shutdown lasts, the more the momentum be extracted from the spring market, the annual ‘Super Bowl’ of the housing market,” said Jonathan Miller, a real estate appraiser at Miller Samuel Inc. “Housing is already showing weakness in a growing number of regions, and this uncertainty only accelerates the trend.”

Mortgage applicants could also face longer wait times, especially for loans that require income verification through the Internal Revenue Service. According to a National Association of Realtors’ analysis of a 16-day government shutdown in 2013, nearly a fifth of home loan deals were affected.

“Since the current shutdown is longer, we could see more loans impacted due to bigger backlogs,” said Mark Fleming, chief economist at First American.

Inequality could get worse

Disadvantaged Americans who rely on federal programs risk losing benefits during a government shutdown, potentially aggravating large gaps in wealth across the country.

Millions of low-income households in the US receive some form of federal rental assistance, with many of them providing for children, the elderly, or those with disabilities. Federal contracts for more than 1,000 government-funded properties for these renters have expired due to the shutdown, NBC News reported this week.

“Should the shutdown continue, landlords may move to evict tenants, and the most vulnerable households in the country will suffer,” Ingrid Gould Ellen, a professor of urban policy and planning at New York University. “Moreover, even if they don’t evict tenants, in the longer-run, landlords may be less willing to participate in federal rental subsidy programs if they don’t think the federal government is a reliable partner.”

Food stamps will be distributed through next month, according to the Trump administration, but it is unclear if that would be the case if the shutdown were to continue into March.

Wall Streeters fled to Silicon Valley to chase riches, influence, and a better life. Now they’re bouncing back to banking.

RECESSION WATCH: Goldman Sachs has created a 5-part checklist for investors looking to avoid the next economic meltdown

Trump reacts on Twitter after learning the FBI had him investigated