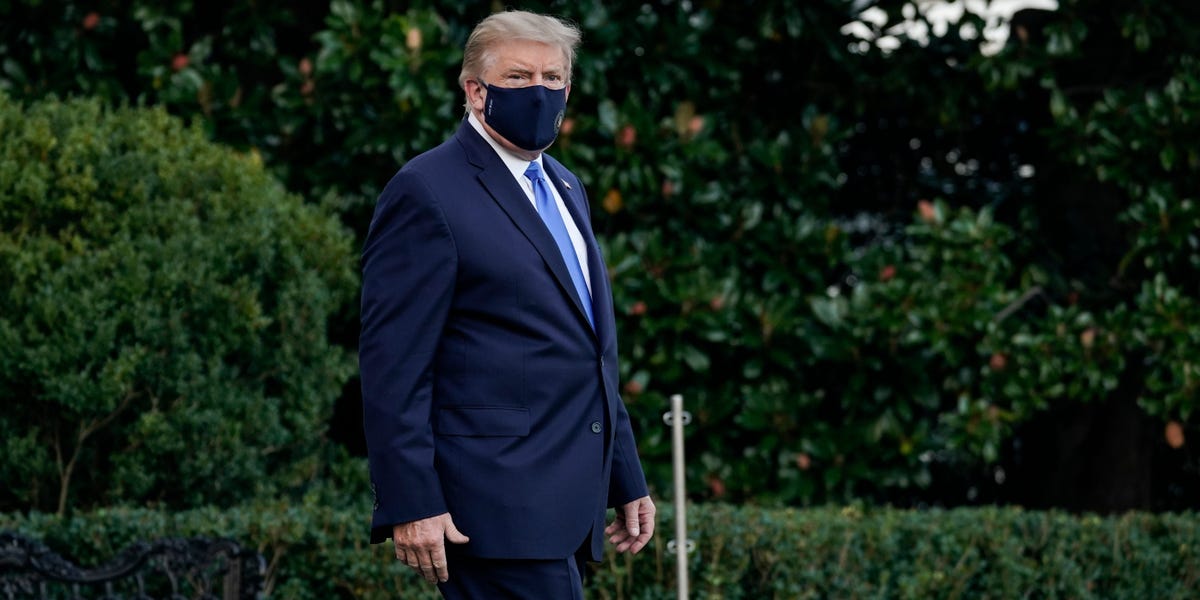 Last weekend, President Donald Trump was still beaming from a White House event where he formally announced Amy Coney Barrett as his latest nominee to the Supreme Court.

But by the following day, his week started to take very unexpected turns.

On Sunday, the president’s financial records were released in a blockbuster report by The New York Times, revealing Trump had only paid $750 in taxes over two years.

That same day, his former campaign manager Brad Parscale was hospitalized after a domestic altercation at his home.

By Tuesday, the highly anticipated Trump-Biden debate turned into a barely comprehensible shouting match, with moderator Chris Wallace losing control of the debate early on.

Late on Thursday, a source revealed to Bloomberg that White House counselor Hope Hicks had been diagnosed with the coronavirus. And then on Friday, Trump announced that he and First Lady Melania Trump had tested positive for the coronavirus, with Trump later being flown from the White House to Walter Reed Hospital.

For years, Trump has refused to release details surrounding his financial records. On Sunday, The New York Times published a lengthy report on his taxes, which revealed a number of shocking details. According to The Times, Trump didn’t pay any income taxes to the federal government for 11 of the 18 years where they examined records. He only paid $750 in federal income taxes in 2016, the year he was elected to the presidency, and in 2017, his first year in office, according to The Times report.

Trump is also hemorrhaging money. Since 2000, he has lost over $315 million at the golf courses that he owns and promotes; from 2016 through 2018, he also showed losses of $55.5 million at the Trump International Hotel Washington, DC.

Late Sunday, Sept. 27: Brad Parscale is admitted to the hospital

On Sunday evening, it was reported that Brad Parscale, President Trump’s former campaign manager, was taken from his home by police in Fort Lauderdale, Fla., and hospitalized earlier that day after his wife said that he was armed and threatening to harm himself. Parscale was taken to the hospital under the Baker Act, which allows for temporary involuntary commitment.

Parscale, a prominent part of Trumpworld since the Trump’s 2016 campaign, was replaced by Bill Stepien as campaign manager this past July.

Tuesday, Sept. 29: A presidential debate goes off the rails

The first presidential debate in Cleveland quickly devolved into partisan sniping, with Trump spending the bulk of his time on stage interrupting and attacking Biden, even lobbing an insult at his son, the former vice president’s son Hunter.

However, Biden did not back down, at one point calling Trump a “clown” while trying to articulate his vision of America to viewers at home despite the two often speaking over one another.

“Will you shut up, man…Keep yapping, man,” Biden said to Trump.

Throughout the debate, moderator Chris Wallace was unsuccessful in getting Trump to adhere to the rules, later saying the debate went “off the tracks.” In the end, Trump did not win many converts and Biden was widely seen as mostly staying above the political fray.

Thursday, Oct. 1: A top Trump counselor gets the coronavirus

On Thursday, White House counselor Hope Hicks tested positive for COVID-19, according to Bloomberg. It was reported that Hicks had traveled with Trump aboard Air Force One to and from the first debate in Cleveland on Tuesday, with the White House finding out about the diagnosis the next day. According to the report, she was also experiencing several symptoms of the disease.

Early Friday morning, Trump announced that he had contracted the coronavirus, along with First Lady Melania Trump. Later that day, after developing a fever and cough, Trump was transported to Walter Reed Medical Center in Bethesda, Md.

“Out of an abundance of caution, and at the recommendation of his physician and medical experts, the President will be working from the presidential offices at Walter Reed for the next few days,” the White House said in a statement.

That evening, it was revealed that former adviser Kellyanne Conway had tested positive for the coronavirus. She had attended the Barrett nomination event at the White House Rose Garden the week before and was shown without a face mask. Others who came into contact with the president this week would later announce their coronavirus infections, including the former governor of New Jersey, Chris Christie, who helped Trump debate prep and several people who attended the Rose Garden event.

Trump is being treated for the coronavirus with remdesivir. At a Saturday press conference, White House physician Sean Conley wouldn’t say if Trump needed supplemental oxygen since his diagnosis. The AP later reported that Trump was given oxygen before he departed the White House on Friday.

Trump tweeted from Walter Reed National Military Medical Center on Saturday, saying “I am feeling well!” while his chief of staff Mark Meadows said had experienced a “very concerning” period on Friday, according to The Associated Press.

“We’re still not on a clear path yet to a full recovery,” Meadows said, noting that the next 48 hours “will be critical” in the president’s battle against coronavirus.