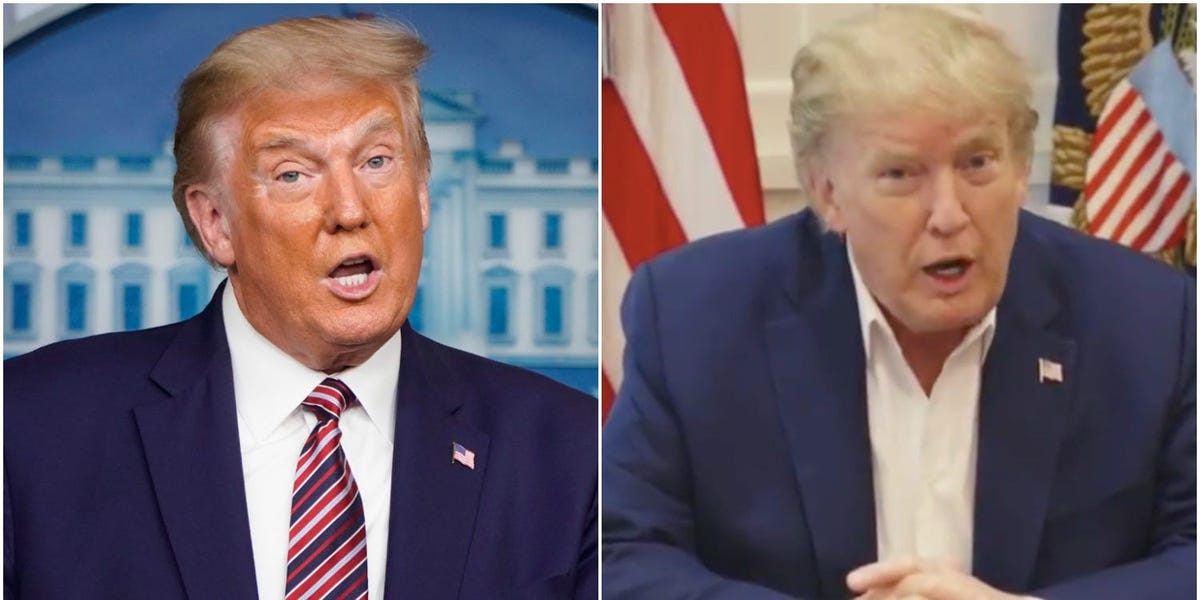 President Donald Trump looked paler than usual while speaking from the Walter Reed medical center on Saturday, a detail that was quickly pointed out by people on social media.

Trump released a video from the hospital where he is being treated for coronavirus, saying he feels “much better now” but that the days ahead will be “the real test.”

In the 4-minute long address, the president appeared to speak and breathe well but looked noticeably paler.

“The difference in Trump’s complexion between Tuesday (left) and Saturday (right) is jarring,” tweeted Vox journalist Aaron Rupar on Saturday.

Krister Johnson, an Emmy Award-winning comedy television producer, joked in response: “The spray tan machine didn’t have the strength to walk to Marine One.”

Watch the clip of Trump’s statement below:

Trump’s skin tone has caused fascination since he entered office in 2016.

A senior administration official told the New York Times in 2019 that the president’s tanned appearance is the result of “good genes” and a little translucent powder, which the president applies himself before television appearances.

Others, including Trump’s former aide Omarosa Manigault Newman, former FBI director James B Comey, and an anonymous makeup artist, claimed that Trump regularly used a tanning bed to get his orange color, the Times reported.

Writing in his 2018 memoir “A Higher Loyalty”, Comey wrote that the president’s “face appeared slightly orange, with bright white half-moons under his eyes, where I assumed he placed small tanning goggles,” according to the Times.

However, three people who have spent time in the White House residence and two other administration officials told the Times there is no tanning bed or spray-tan booth in the president’s official residence.

Trump announced he and First Lady Melania Trump had tested positive for coronavirus in the early hours of Friday and was admitted to Walter Reed Hospital later that day or “further monitoring” and treatment, according to a memo.

In his address from the hospital, the president said he was “starting to feel good,” though he admitted that when he first arrived at Walter Reed he “wasn’t feeling so well.”

“I feel much better now. We’re working hard to get me all the way back. I have to be back because we still have to make America great again,” he said.

The White House also released official images of the president working in the hospital on Saturday that critics say appear to be a publicity stunt.

According to Trump’s doctors, the president has been treated with several drugs, including a five-day course of the antiviral drug remdesivir.

The White House and Trump’s team of doctors, led by Sean Conley, faced scrutiny earlier on Saturday after refusing to answer basic questions on the president’s condition and sending out mixed messages.

According to White House chief of staff, Mark Meadows, the coming days will be “critical” in finding out how Trump will handle the disease.

Minnesota congressmen flew Delta days after being on plane with Trump