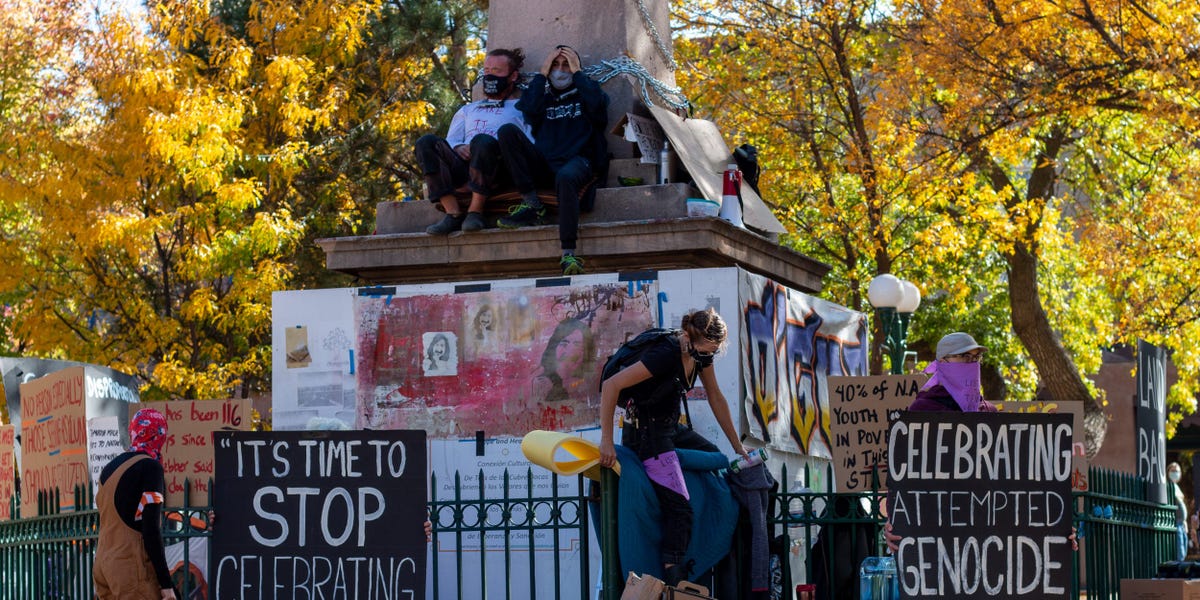 Visitors to the historic plaza in Santa Fe, a bastion of liberalism in northern New Mexico, will find a charming square in the Spanish colonial style, surrounded by shops selling native wares — typically sold by non-native peoples — and a monument at the center of it all celebrating the slaughter of the area’s original, commercially monetized inhabitants.

“To the heroes who have fallen in the various battles with the savage Indians in the territory of New Mexico,” the monument, an obelisk erected in 1866, read for over a hundred years. The word “savage” has since been removed; not by public authorities, but by an unknown activist posing as a city worker in 1974.

As of 2019, New Mexico, where Native Americans make up roughly 11% of the population, officially celebrates Indigenous Peoples’ Day. But the state, which appropriated the native Zeo people’s solar symbol for its flag, remains flush with reminders of settler-colonialism and brutal conquest.

Santa Fe, at least, was supposed to be doing something about it. In June, Mayor Alan Webber, a liberal Democrat elected in 2018, responded to indigenous-led protests by pledging to remove the obelisk in his city’s downtown and to form a truth-and-reconciliation committee to advise the municipality on the best way forward.

“Monuments are one way we remember and keep alive our history, but these symbols must speak the truth about the full history, not just that of the victors,” he said in a statement. “That is the only way we will heal as a community.”

Four months later, the obelisk stands and no commission exists.

This weekend, native activists and their non-native allies marked the holiday formerly honoring Christoper Columbus by asking Webber to live up to his promise. Two people did so by chaining themselves to the monument; as of Sunday evening, they had been chained to it for over 24 hours.

Activists declined requests to be interviewed. But flyers posted around the monument explained their demands.

“The Obelisk is a symbol of oppression, colonization, and the continuing genocide of Tewa people, the original occupants of this stolen land,” the flyer states. “Now is the time to create new symbols of inclusion and create a community of accountability.”

One protester on Sunday held a sign reminding the mayor of his remarks over the summer: “It’s time to stop celebrating conquest.”

The controversy now is not over whether a monument to genocide should exist, but why an emerging consensus — and long-time native demand — has not been met with promised actions.

In a statement released Sunday night, Mayor Webber argued the best way to address the ongoing controversy is for protesters “to come down off of the obelisk” and engage in a “a community-wide conversation.” In the meantime, the city will continue to review legal issues that Webber said prevent him from unilaterally resolving the issue.

“Resolving the legal issues will take some time,” he said, “time that can be put to productive use with a broad-based discussion involving the people of Santa Fe, the historic Hispanic groups and families, and the surrounding Pueblos and urban Native Americans in a positive dialog, not only about our shared past, but also about the shared future we wish to create.”

The lingering question is whether social peace can be had before there is any corrective to historical, and celebrated, injustice.