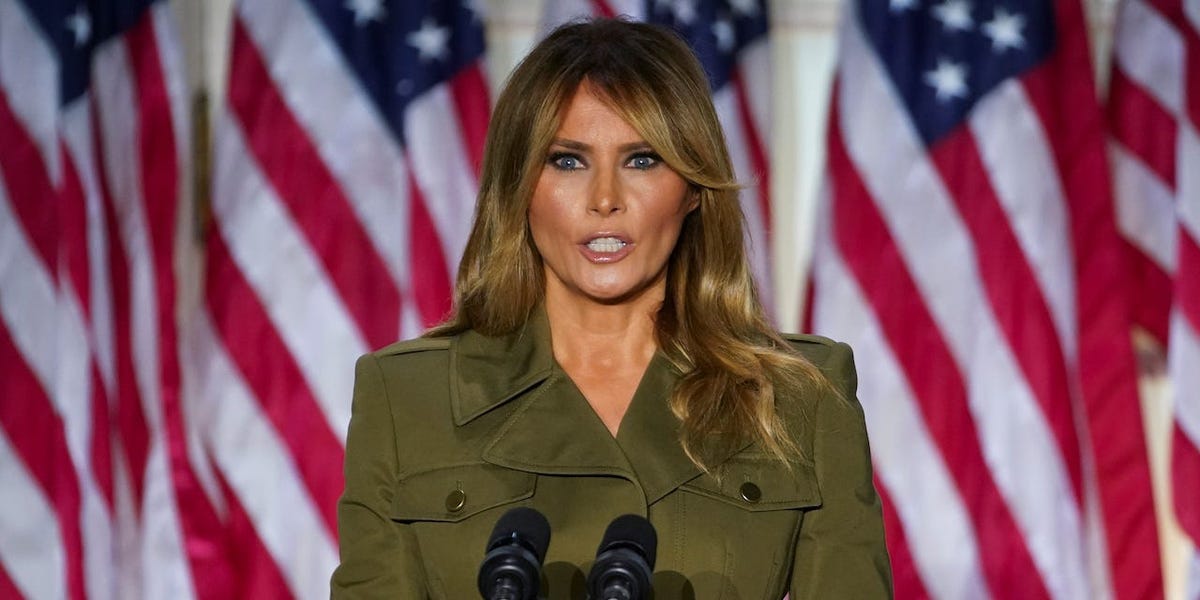 First Lady Melania Trump celebrated her husband’s record as president and offered a solemn call to action at the Republican National Convention on Tuesday night.

“I’m here because we need my husband to be our president and commander for four more years,” she said.

Unlike most speakers at the Republican convention, Trump acknowledged the severity of the Covid-19 crisis and offered sympathy for those who’ve been impacted by it. She specifically offered encouragement to mothers faced with schooling their children at home this fall.

Trump’s speech, controversially delivered in the newly-renovated Rose Garden at the White House, was heavy in praise for her husband and light on policy. About 50 supporters, including the president and other family members, Vice President Mike Pence, and Second Lady Karen Pence attended her speech in person.

Ethics experts have criticized the president and first lady for using the White House as the backdrop for their RNC appearance this week — a possible violation of the Hatch Act.

The first lady mentioned her experiences visiting members of the military and their families “around the world” and those in hospitals, and thanked them for “inspiring” her. She told the story of a young hospitalized boy she met in Rome, Italy who received a heart transplant shortly after she visited him.

Trump focused on her signature “Be Best” campaign, which raises awareness about online bullying and opioid addiction, particularly among children. She said her initiative had shined a light on people and organizations who are working to protect children.

“I continue to believe that by shining a light on these positive examples, others across the country and the globe will be inspired to do their part,” she said. “Helping children is not a political goal.”

The initiative doesn’t have any concrete policy aims and critics have accused the first lady of hypocrisy for discouraging cyber bullying while her husband uses his Twitter account to attack his critics and political opponents.

The first lady said in her second term in the White House, she’d like to work with states to pass legislation to protect children from addiction, abuse and neglect.

She also spoke about the “racial unrest” in the country and urged Americans to “focus on our future, while still learning from our past.”

She added, “I also ask people to stop the looting and violence done in the name of injustice.”

“While the debates rage on about the issues of race, let’s focus on the progress we have made,” she said.

She concluded the address by praising her husband’s “honesty” and “authenticity.”

“Whether you like it or not, you always know what he’s thinking,” she said, an apparent joke about his tweets.

Trump’s speech, which closed the night, contrasted with the first two days of the Republican convention, which were dominated by dark warnings of a socialist takeover, crime, and chaos if the president loses reelection.

The second night of the convention featured a series of speakers who highlighted partisan divisions on key issues including immigration and abortion, and attacked Democrats as socialists.

Tuesday night’s address was the first lady’s most prominent public remarks since her scandal-plagued 2016 convention speech, which included a passage that appeared to be plagiarized from former First Lady Michelle Obama’s 2008 Democratic convention speech. (A Trump campaign official was blamed for the alleged plagiarism).

The first lady rarely speaks at length in public and has remained almost entirely out of the public eye in recent weeks. She’s more private and less involved in White House affairs than any other first lady in modern history. The former model and jewelry designer hosts fewer events, travels less, almost never sits for an interview, and rarely campaigns for her husband.

She has publicly disagreed with her husband’s policies on a few occasions, including publicly criticizing his administration’s separation of migrant children from their parents and calling for peaceful demonstrations over police brutality as the president threatened violence against protesters.

Trump’s speech comes as her former close friend and adviser, socialite Stephanie Winston Wolkoff, prepares to release a book documenting their tumultuous relationship, which reportedly ended after Wolkoff raked in millions for her work on the 2017 inauguration. Wolkoff said she was “thrown under the bus” by the first lady amid scrutiny of the inauguration’s spending.

The book’s publisher, Simon & Schuster, says Wolkoff will provide new details about Melania’s reactions to the Access Hollywood tape, her husband’s alleged affairs and hush money payments, and why the first lady wore a controversial jacket with the words, “I really don’t care, do u?” printed on it.