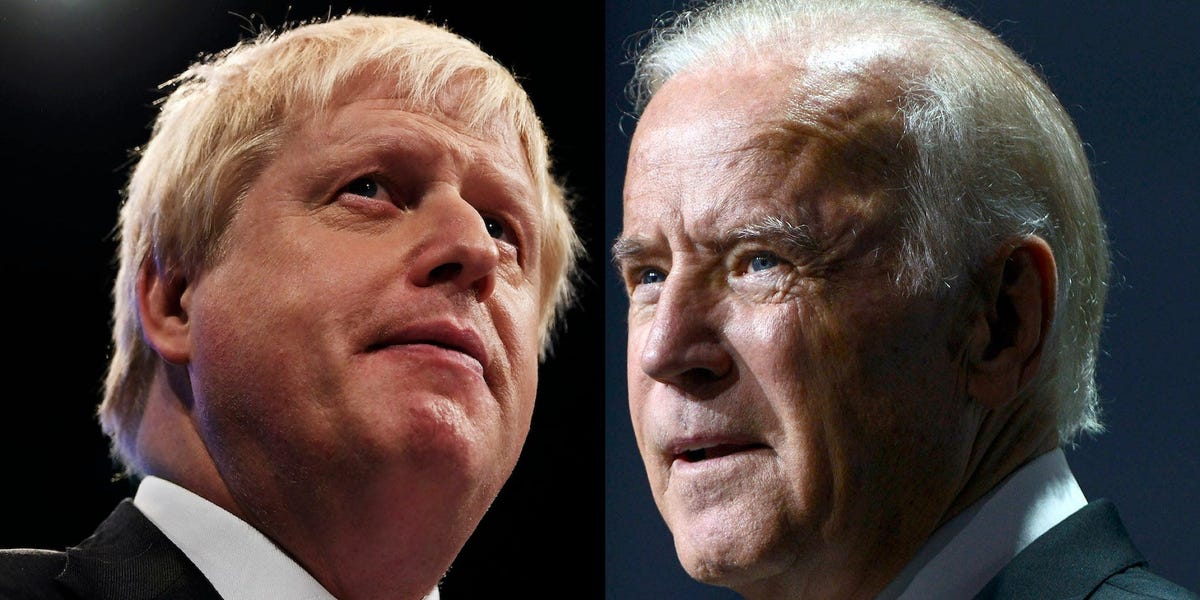 Joe Biden has enraged supporters of UK Prime Minister Boris Johnson after threatening to veto a transatlantic trade deal if the UK goes ahead with its plan to break its Brexit agreement with the EU.

Johnson caused an international row this week after his government admitted it plans to break international law by overwriting its deal with the EU in relation to Northern Ireland.

The move led to a backlash from the House Speaker Nancy Pelosi and a group of senior congressmen, who all warned that any attempt to break the Brexit deal would wreck any hopes of a UK-US trade deal

The US Democratic presidential candidate, tweeted in support of the congressmen on Wednesday: saying “We can’t allow the Good Friday Agreement that brought peace to Northern Ireland to become a casualty of Brexit. Any trade deal between the U.S. and U.K. must be contingent upon respect for the Agreement and preventing the return of a hard border. Period.”

Biden’s intervention was welcomed by Johnson’s domestic opponents, with Lisa Nandy, the opposition Labour Party’s shadow foreign secretary, saying it showed “the scale of the damage the Government have done to Britain’s standing in the world.”

However, his comments sparked a furious reaction from Conservative party supporters of Johnson.

Former-UK trade minister Conor Burns accused the Democratic candidate of not understanding the Good Friday agreement while another former UK Cabinet minister told Politico Playbook that Biden was a “Brexit and Boris hater” who “doesn’t understand” the Northern Ireland issue.

“We don’t need lectures on the Northern Ireland peace deal from Mr Biden. If I were him I would worry more about the need for a peace deal in the USA to stop the killing and rioting before lecturing other sovereign nations,” Duncan Smith told the Times of London.

A spokesman for Johnson suggested on Thursday that Biden had misunderstood the government’s plans.

“We continue to remain absolutely committed to no hard border and no border infrastructure between the Republic of Ireland and Northern Ireland and we will continue to engage with our US partners on a bipartisan basis to ensure our position is understood,” the spokesman said.

Biden’s intervention came despite a visit by UK Foreign Secretary Dominic Raab to Washington this week which was designed to reassure congressmen and women that Johnson’s plan would not undermine the Good Friday Agreement and peace on the island of Ireland.

However, Raab’s attempts to calm fears across the Atlantic appeared to fail, with Biden publicly warning Johnson’s UK government that it risked jeopardizing any prospect of a post-Brexit free trade agreement with the US.

Following a meeting with Raab on Wednesday, House Speaker Nancy Pelosi reiterated her own warning that there will be no UK-US free trade deal if Johnson’s government did not uphold the Northern Ireland protocol agreed with the EU last year.

She said she told Raab that “if the UK violates its international agreements and Brexit undermines the Good Friday accord, there will be absolutely no chance of a US UK trade agreement passing Congress.”

Johnson’s plan to disapply parts of the Northern Ireland protocol infuriated Brussels, with the EU threatening to take legal action against the UK unless it changed course. It also caused consternation in Westminster, with Johnson on Wednesday agreeing to give Parliament a vote on the move amid a rebellion from dozens of his own Conservative MPs.

However, the interventions of several senior US politicians this week suggests that the move risks not only damaging the prospect of a UK trade deal with the EU but also an agreement with the US.

On Tuesday four senior congressman — Foreign Affairs Committee chair Eliot Engel, Ways and Means Committee chair Richard Neal, subcommittee on European affairs chair William Keating, and Republican congressman Peter King — wrote to Johnson saying there were “disturbed” by the move and said “we therefore urge you to abandon any and all legally questionable and unfair efforts to flout the Northern Ireland protocol of the Withdrawal Agreement.”

Washington has a strong interest in how Brexit will affect Northern Ireland after the US played a key role in brokering peace in the province. There is fear that failure to uphold the Northern Ireland protocol, which was designed to avoid a hard border on the island of Ireland, would lead to the return of physical border infrastructure between Northern Ireland and the Republic of Ireland.

Speaking alongside Pompeo in a press conference, Raab risked further inflaming tensions with Brussels, claiming that any threat to the Good Friday Agreement had “come from the EU’s politicization of the issue” of Northern Ireland.

There is an ugly history of forced sterilization in the US