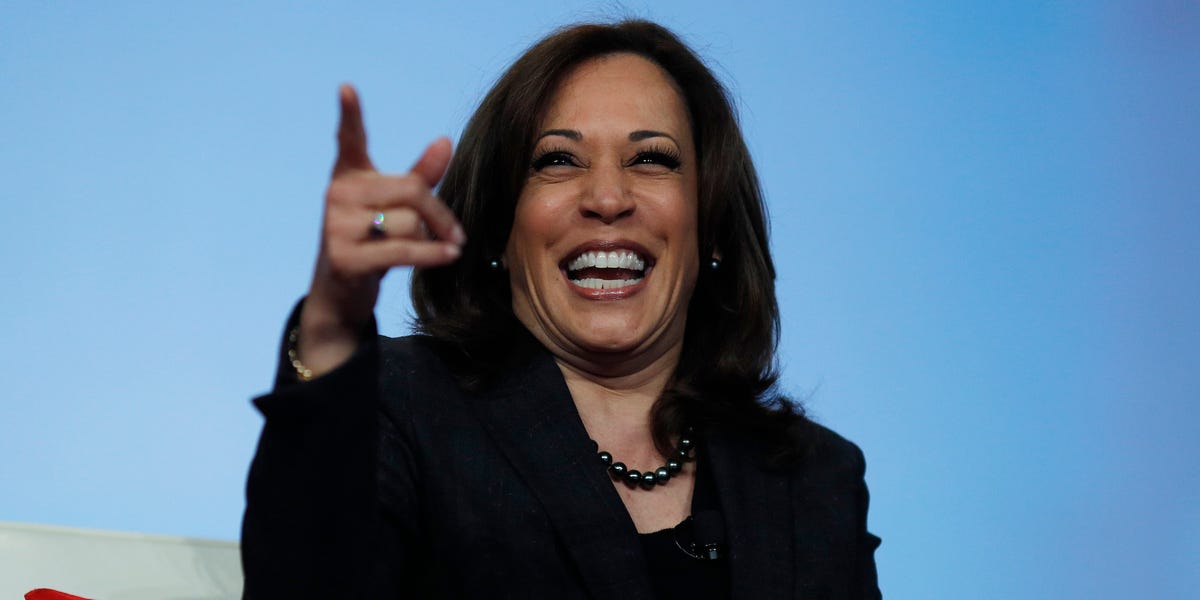 Hello, everyone! Welcome to the new edition of Insider Today. Please sign up here.

QUOTE OF THE DAY

“The probability of finding life on another world keeps going up! Ceres is the latest evidence that our solar system is filled with ancient habitable environments.” — NASA Administrator Jim Bridenstine, responding to the discovery that the dwarf planet may contain a subsurface ocean.

Kamala Harris is the Biden running mate the Trump campaign feared most. She’s hard to paint as a radical leftist, though Trump is already trying to do that. He called her “nasty,” of course.

Trump cuts unemployment benefit to $300 after states complained. Trump modified his plan to pay bonus unemployment without congressional approval. He proposed $400 per week, with states kicking in $100. States say they can’t afford it, so Trump has simply shrunk the payment to $300. The money is expected to last only a few weeks.

Sumner Redstone died at 97. He built an empire that encompassed CBS, Viacom, and Paramount Pictures at its height. There were fearsome fights for control of his company in recent years as he faded.

VIEWS OF THE DAY

Looked at one way, Kamala Harris is the most remarkable vice presidential candidate in American history — a Black woman, an Asian-American woman, the mixed-race child of immigrants. Looked at another, Kamala Harris is Mike Pence.

More importantly, like Pence, Harris is a Vicar of Bray. She has a canny gift for positioning herself in the center of her party, and for never locking herself into anything. She was a toughish-on-crime prosecutor when it was convenient for Democrats to be prosecutors. She shifted her focus towards racial justice when that became the electoral focus. She’s definitely for improving American healthcare, but drifts toward whichever policy seems to be popular in the Democratic party when she’s asked about it. (Does she want to abolish private health insurance? Maybe?)

She is, in short, a politician, which is in no sense criticism. Her job is to be a politician! She would likely make a very good vice president in the Pence mode.

Pence has been a very good vice president…for Mike Pence. He’s attached himself to Trump’s most popular measures, distanced himself from the president’s vileness, and relentlessly cultivated relationships with conservative interest groups. When the time comes to run for president — and that time is the minute the 2020 race ends — Pence will be able to run a campaign that tacks as close or far from Trump as is politically expedient in the moment.

If Harris is elected vice president, expect her to show similar skill at burnishing her reputation, and positioning herself optimally for the 2024 campaign. — DP

That was a new low for White House briefings

At his Tuesday briefing, President Trump only talked about the coronavirus to comment on the strength of the US economy, cherrypicking stats from European nations to make his argument seem passable (it was not).

He also lent his support to members of his party like Rep. Jim Jordan who want to see college football resume in September (the Big Ten and Pac-12 already postponed its season). He also told players that they’d better stand for the national anthem, or “a lot of people won’t watch and I’m one of them,” he said. He also bashed the NBA for embracing Black Lives Matter.

But while those were all low, they were not a new low. The new low was the fact that Trump only answered three softball questions and dodged reporters from major news organizations.

One New York Post reporter mentioned that Kamala Harris may have smoked weed and listened to Tupac, before pivoting the question to FISA warrants and Edward Snowden. Another reporter brought up violence in Portland, which Trump used to paint Harris (a former Attorney General) as weak on crime. And the last question was directly about Trump’s thoughts on Harris as a VP pick.

Trump’s attacks on Harris are new and still sloppy. He tried to identify her with the far left, and whined that she was “mean” to Justice Brett Kavanaugh. He claimed that he was hoping Biden would pick her, and he called Harris “nasty,” just as he did Secretary of State Hillary Clinton. Clearly, the nickname-generating machine in his head has not spit anything out for Harris yet. But there’s plenty of time.

Again, though, what’s striking about this foolishness was that Trump did not call on any reporters who might ask him a real question. Once his friends had asked the questions he wanted to answer, he left. These White House briefings were already dreadfully devoid of content. Without real questions, they are purely propaganda. —Linette Lopez

The other, more important, reason college football is canceled

The Big Ten and Pac 12 have canceled their fall sports seasons — notably college football — because they’re concerned about the safety of players.

Excuse me, I meant to say, the safety of “student-athletes.”

That hyphenated euphemism is all over the Pac-12 and Big Ten’s cancellation announcements — the Pac-12 says “student-athlete” seven times! That itself signals that there’s more going on here than just heartfelt care for the health of students.

It’s true that logic and health require cancelation. Even the richest college sports programs would struggle to complete a fall schedule. Rutgers, a Big Ten school, already has a football COVID cluster, with 28 players testing positive after partying together. The huge numbers of players and coaches, the immense travel, the breathy nature of the football trenches — they all make it impossible to imagine a virus-free season.

But a second, deeper reason explains why these big-time conferences axed their signature sport. Consider the Big Ten, where six schools have already cancelled in-person fall classes, and the others have radically cut back in-person classes. If a school is requiring its students to shun campus for classes — which are, after all, the actual purpose of the school — how can it possibly argue that students should be present to play sports, which are an extracurricular activity? If you’re requiring your student-athletes be athletes but not be students, suddenly it becomes very clear that they are not in fact student-athletes. They are employees.

The NCAA is engaged in an existential struggle over this question, and has begun losing battles over things like the rights of college athletes to control their own image rights. If universities effectively try to compel their scholarship athletes to play games and practice in person while not even holding classes, they will effectively admit what the rest of us already know: which is that these athletes are workers, and thus are entitled to the rights of workers — notably compensation and protection from exploitation.

They’d rather lose a college football season than concede that truth. — DP

Barring some highly unusual mishap at this late stage, Greene will be a member of Congress next January.

For the uninitiated, QAnon originated in far-right message boards, where claims of a “Deep State” coup against Trump snowballed into accusations that Hillary Clinton and Barack Obama are secret Satanists, and the typical tinfoil claptrap about a secret conclave of pedophile elites controlling the world. It’s basically Illuminati for Dummies.

Trump, himself a voracious consumer of conspiracy theories, has retweeted pro-QAnon accounts and his campaign has embraced the QAnon community’s fantastical conspiratory rhetoric.

Greene’s likely ascension to the House of Representatives means that whether or not Trump wins or loses in November, a certain form of Trumpism — the right-wing internet conspiracy theory set — will remain in the federal government.

Another aspect of Trumpism that Greene will likely bring to Capitol Hill: racism.

Greene was condemned by congressional GOP leaders after Politico found hours worth of videos on Facebook where she made many overtly racist and Islamophobic statements.

Just as they finally confronted Steve King’s racism by running a successful primary challenger, the Republican Party leadership now needs to reckon with Greene. They need to take stock and ask themselves how a person with her ideas could so resonate with Republican voters that they’d send her to Washington. — Anthony Fisher

“Paternity leave is for pussies” That’s what SoulCycle’s former CEO said, according to a new lawsuit filed by a senior executive who says she was fired shortly after giving birth.

Uber could shut down in California, CEO warns. He says the company could temporarily stop operating if a court doesn’t reverse yesterday’s ruling finding that Uber drivers are employees, not independent contractors.

Kamala Harris means more Maya Rudolph on SNL. Rudolph killed as Harris during the Democratic primary campaign, so she’ll be back for the fall campaign (and perhaps for years, and years, and years).

How often do couples have sex? And how often should they? Insider has the data for the first question, and lots of advice for the second.

There’s exactly one Blockbuster store left on earth. It’s in Bend, Oregon, and you can rent it out as a pandemic Airbnb.

Ghislaine Maxwell says she’s being mistreated in jail. She wants to be released from solitary confinement and given access to a computer so she can work on her defense.

“We should not shame women who have WAP.” OB-GYNs weigh in on Cardi B and Megan Thee Stallion’s hit, say lubricated genitalia are healthy.

*The most popular stories on Insider today.