The partial government shutdown, the longest on record, reached its 34th day Thursday. Furloughed government workers have already missed one paycheck, and many are set to miss their second on Friday.

And while the direct impact from the shutdown is a “loss in real government expenditures,” according to economists at Bank of America Merrill Lynch, the indirect impact is the response of US businesses and consumers.

A recent survey conducted by the bank found that 34% of respondents thought the economy had worsened in the past year. Another 34% said the outlook for the economy had dimmed.

The more downbeat view on the economy was also reflected in the University of Michigan’s consumer-sentiment survey from January, which was released Friday. In its largest one-month drop since 2012, the index fell from 98.3 in December to a more than two-year low of 90.7 in January. Economists surveyed by Bloomberg were expecting a reading of 96.4.

And while the shutdown may not have been the only reason behind the drop, it was at least partially to blame, according to Richard Curtin, the chief economist of the survey. “The loss was due to a host of issues including the partial government shutdown, the impact of tariffs, instabilities in financial markets, the global slowdown, and the lack of clarity about monetary policies,” he said in a press release.

Bank of America asked the survey respondents where they cut their spending if their after-tax income decreased this year, and while the answers may not be surprising, they still shed light on the types of businesses that could be affected by the shutdown.

Here’s what they said: 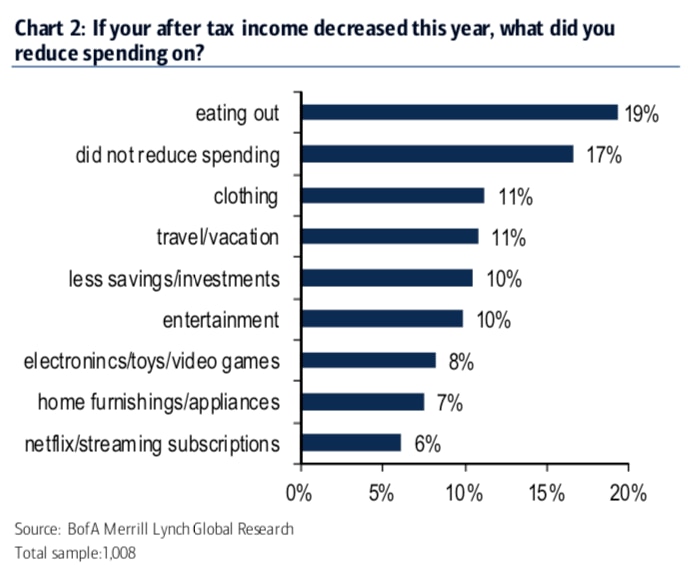 Interestingly, some of America’s biggest companies have already commented on what impact, if any, they are seeing from the shutdown.

“Now with respect to the government shutdown, we are seeing some pressure on our business,” Delta Air Lines said on its most recent earnings call.

“On the revenue front, we’re experiencing about $25 million per month in lower government travel. The bigger impact is on our operations. With nonessential work at the FAA shutdown, our Airbus 220 start date is likely to be pushed back due to delays in the certification process. This is also hampering our ability to put 7 other new aircraft deliveries into service, but it’s our customers who are seeing the biggest impact with longer lines at airport security.”

And JPMorgan also noted the shutdown was weighing on business.

“I would say, CapEx is sluggish on, fears around global growth,” the bank said.

“Government shutdown and trade are not particularly helpful. Uncertainty is not good for anyone. So there’s no doubt that as things continue, if there’s a level of anxiety and uncertainty, it’s just not constructive for confidence, and confidence begets stronger or less strong markets.”

As for how much of an impact the shutdown had on individual businesses, we most likely won’t get a clear picture until the first-quarter earnings season begins in about three months.

Jared Kushner: Top-secret clearance app got rejected, but not for long