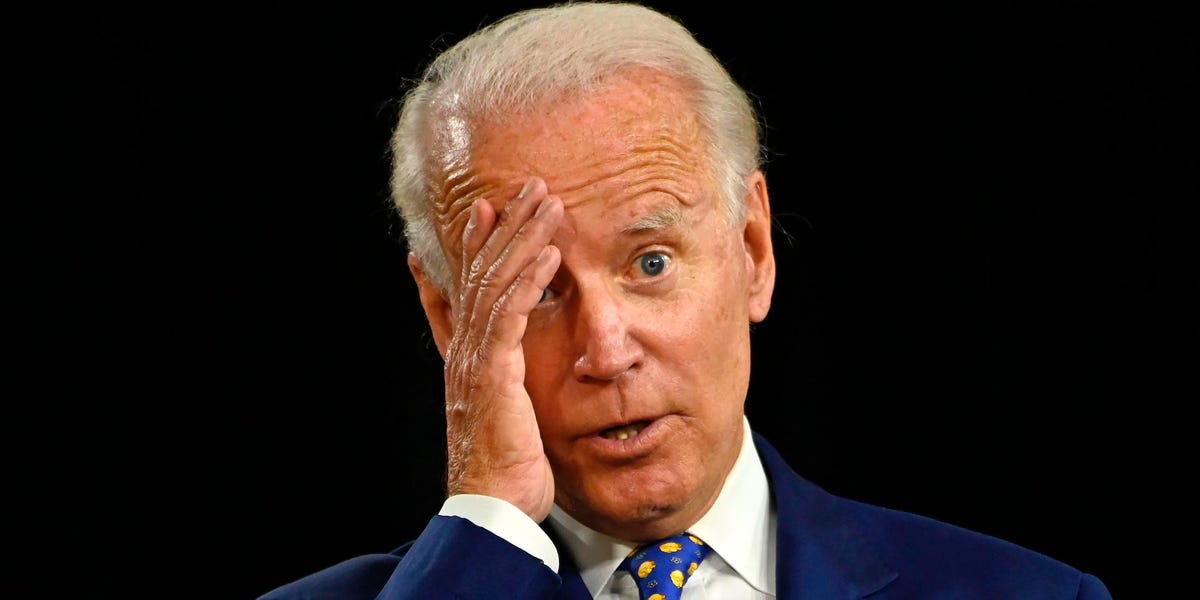 Hello, everyone! Welcome to the new edition of Insider Today. Please sign up here.

QUOTE OF THE DAY

“It’s my number one priority between now and Election Day.” — Postmaster General Louis DeJoy testifying today before the Senate, and says delivering mail-in ballots is the Post Office’s most important job for the next two months.

Even Fox News praised Biden’s convention acceptance speech. The virtual convention has been widely hailed for how much it included regular Americans, how it celebrated Biden’s decency, and how it revealed Trump’s incompetence. The GOP convention starts Monday.

California wildfires continue to burn out of control. The Northern California fires, caused by record heat and lightning strikes, are consuming almost 800 square miles, and doubled in size yesterday. At least five people have been killed by the fires.

The US national debt has exceeded annual GDP for the first time in history. Pandemic relief spending has driven debt above $20 trillion, slightly more than GDP. Deficit hawks have warned that a debt-to-GDP ratio above 1 would wreck the economy, but there’s no sign it’s happening.

VIEWS OF THE DAY

Will the Republicans try to copy the Democrats’ warm, intimate convention? Or will they let Trump be Trump?

Trump has a big problem next week, and it will be fascinating to see him try to solve it.

The strange and extremely moving Democratic convention upended our sense of what a convention is, and did it way better than almost anyone expected. The traditional televised convention is a raucous, high-energy, mongo affair of crazy costumes, shouting, and pageantry. The traditional convention is delightful for the people in the room, and mostly repellent for viewers at home. Who wants to watch on TV a very shouty party that you weren’t invited to?

The Democrats’ COVID convention solved this problem almost too well. They chose intimacy and authenticity. Again and again over the four nights, they gave us regular people in their own homes, towns, and states, often via the crumminess of a Zoom connection. It was four nights of awkward pauses and unflattering camera angles. Yet this heartfelt, intimate clumsiness made a persuasive case that Joe Biden is a decent, warm human being. This reached its zenith with the gripping, stuttering speech of 13-year-old Brayden Harrington, which was just about the most effective presidential endorsement I’ve ever seen.

All of the most powerful moments from politicians, too, came through quiet direct address, rather than with the grandiloquent pomposity that’s required for a speech to a packed convention hall. Both Obamas, Elizabeth Warren, Bernie Sanders, the seven defeated Biden rivals in a Zoom group chat — they all created warmth and connection by being low-key rather than loud. And last night, Biden did the same: Though he gave his acceptance speech in a hall, he made it small, personal, and direct. (It’s not surprising that the weakest speech of the week, Kamala Harris’, had the most trappings of a convention hall address.)

So, the problem! Trump feeds on the crazy energy of the rally and the adulation of supporters. And his supporters feed on his anger and melodrama. It’s a very effective feedback loop and it works amazingly well with crowds.

The Trump campaign faces a daunting task for next week. Can they figure out how to translate Trump’s hammy, theatrical big-room energy to the new medium? Intimacy repels Trump, and so far, his pandemic-era presidential campaign hasn’t figured out how to downscale.

But don’t assume they won’t by next week. They had a chance to watch the Democrats and will try to ape the DNC’s best ideas. And Trump is a phenomenal TV communicator. So maybe they will figure it out. —DP

Those “Biden-is-senile” attacks now seem like a huge mistake.

If you’ve been listening to the Trump folks in recent weeks, you may believe that Joe Biden is a doddering senior citizen, a geezer who certainly couldn’t remember “person woman man camera TV,” probably couldn’t pick out a picture of a rhinoceros, and definitely can’t speak in complete sentences. Trump’s principal line of attack, the very fulcrum of his campaign, is that Biden’s too senile to be president.

The problem with basing a campaign on your opponent’s supposed mental incapacity is that the opponent can vanquish it simply by appearing moderately capable. The Trump campaign set an exceedingly low bar, and Biden hopped right over it.  He gave a very good, thoughtful speech last night — the speech of a man who obviously has a brain and a heart in working order. No one who watched it could possibly think: Oh, this poor old guy is gaga.

What’s more, the convention’s focus on Biden’s stutter may make Trump’s mockery of his verbal miscues seem not merely misguided, but actually to be bullying. The convention showed that Biden isn’t stupid or out of it or over-the-hill when he stumbles. Rather he has spent his life working hard to overcome a disability, and helping others — like my new 13-year-old hero Brayden Harrington — do the same. Mock that, deride that, and you mock anyone who’s ever worked to overcome a challenge.

The campaigning is just beginning and Biden could certainly bomb at the debates or gaffe a few speeches, but the convention did a very effective job of turning the senility attacks back against Trump.  — DP

By the skin of their teeth, Uber and Lyft have managed to continue operating in the state of California, despite refusing to adhere to new state law by giving their full-time drivers benefits

I know you like hailing rides, but save yourself some energy and do not feel sorry for these companies.

The plight of the full-time rideshare driver is well documented at this point. The money they make is not a living wage. They do not have health insurance, or sick leave, or any benefit that lends some dignity to working for hours on end. They are abused by passengers, and sometimes (alternatively) poorly vetted by rideshare companies. So California passed a law that would make these businesses better for the society they are blessed to operate in.

The companies are obviously not pleased with this situation. Uber CEO Dara Khosrowshahi recently said in an interview: “It’s not called labor-ism. It’s not called socialism. It’s capitalism and it’s a system that’s built to maximize shareholder value and capital.”

This is rich coming from the CEO of a company that has piled up massive losses year after year. And it’s not like Uber is made up of a bunch of altar boys and girls either. Founder and former CEO Travis Kalanick was pushed out for fostering notoriously toxic environment. One ex-employee accused the company of spying on rival companies. Another former executive is accused of paying hush money to hide a data breach. Last year it paid out $4.4 million in a gender discrimination case. There’s more but we don’t have all day.

America is a society, and it is a society that — lucky for us — believes in capitalism. If a malfunction of our capitalism – a disconnect between the way we envision it and the way it is practiced — is hurting our society, then we need to figure out how to fix the malfunction, to make capitalism work for our society.

This country’s capitalism isn’t perfect, we’ve had to do the hard work of adjusting it to work for our society several times in history before — with the railroad trusts, with Treasury Secretary Andrew Mellon, with the phone companies, with Microsoft.

What’s happening with Uber and Lyft is hard, but keeping society together is hard work. These companies are having their moment because their business is structured in a way that does not take care of the communities they serve. And, I cannot stress this enough, the model isn’t even profitable.

We, taxpayers who have to pay for benefits for underpaid workers, are the ones footing the bill for Uber and Lyft. You, shareholders who hand these companies money with the hope that one day they’ll eke out a profit — despite already being the most dominant ride-hailing companies on the planet — are footing the bill for Uber and Lyft. That’s not how capitalism is supposed to work. And we are the people charged with making sure that it works. — Linette Lopez

When Trump pushed racism, xenophobia, and other forms of class warfare during his first run for president, his more literate allies swore he was actually doing none of those things.

Rather, they said, he was pushing “economic populism” to help save the little American guy from the “globalist agenda.” Trumpism wasn’t racist, it was merely “nationalist,” went the argument.

Former Trump campaign CEO Steve Bannon’s indictment — along with three associates — for allegedly ripping off donors to a charity meant to build the border wall that Trump promised Mexico would pay for, is a fitting denouement to the myth of Trumpist populism.

Through the Breitbart website he once headed to the alt-right figures he promoted, Bannon helped convince millions of Americans to fear and loathe immigrants, who were tools of the Soros-aligned globalists and Koch-aligned free marketeers out to drive down their wages.

Bannon and company exploited the “economic anxiety” of the lower-middle class Trump voter for electoral gain. Now it appears they exploited those same people for personal economic gain.

Reportedly worth as much as $48 million from his past professional backgrounds in finance and Hollywood, Bannon’s own “economic anxiety” allegedly led him to pilfer an additional $1 million from what started as a GoFundMe campaign that was promised to “100%” go to a stupid, ineffective, symbolic construction project.

It’s hard to imagine having more contempt for your audience than confessing to ripping them off while simultaneously asking for their money. But, it seems, Bannon may have done that very thing when he joked during a Build the Wall telethon that his co-indictee Brian Kolfage was taking the Build the Wall money for himself. — Anthony Fisher

Amazon’s second-most powerful executive is leaving the company in early 2021. Jeff Wilke, the consumer chief, will be succeeded by Dave Clark, who runs Amazon’s worldwide operations.

The economic value of wearing a facemask for a day is $56.14, according to a calculation by the Economist.

LA cut off the power of this TikTok influencer for partying too much. Now Bryce Hall is complaining that it’s really hot and he doesn’t have air conditioning.

Lori Loughlin’s husband sentenced to five months of prison in the college admissions scandal. Mossimo Giannulli and Laughlin paid $500,000 to cheat their daughters into college. Loughlin will be sentenced later today.

The Navy SEAL who killed Bin Laden was banned by Delta for refusing to wear a mask. Robert O’Neill sent and deleted a stupid, profane tweet about it.

The International Space Station has sprung a small air leak. NASA says it’s no danger, but the astronaut and two cosmonauts living there will spend the weekend hunting it down.

A Chick-fil-A employee says she was fired for sharing a menu hack video on TikTok. The video, which went viral, told how to finagle the menu to get an extra-low price on a particular drink.

*The most popular stories on Insider today.