A dimming economic outlook in China has rattled global markets in recent weeks. In trade, things could get worse before they get better.

China’s exports fell by the most in two years in December, the General Administration of Customs data said Monday, shedding 4.4% from a year earlier. Imports, meanwhile, fell 7.6% in their largest drop since 2016.

Officials have rushed to try to shore up confidence, vowing various stimulus programs from easier lending rules to tax cuts. And while the economy is expected to recover eventually, experts say there is still plenty of room for activity to fall.

“China’s trade data will get nastier,” said Freya Beamish, chief Asia economist at Pantheon Macroeconomics. “The most prescient indicators, however, suggest that the recovery should be V-shaped.”

“The PMIs suggest deepening near-term pain,” she said. “The new export orders subindex of the official PMI is not reliable on a month-to-month basis, but does offer a robust three-month lead on the trend. It currently is giving a very strong downward signal.” 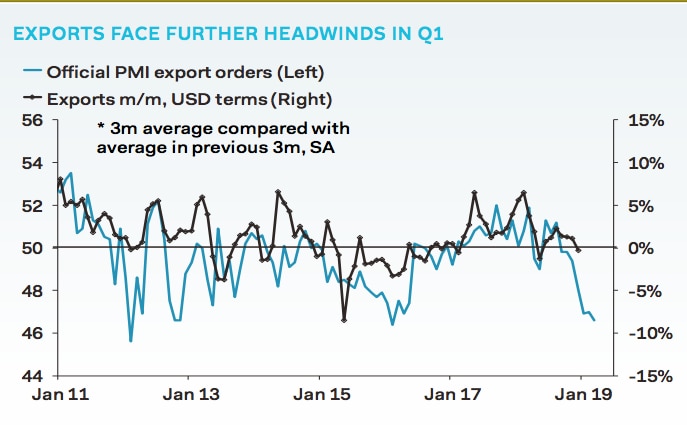 Imports, for their part, are expected to bottom out in the middle of 2019.

“China’s overall import growth could be suppressed by weaker domestic demand, even though its imports of US goods will likely pick up notably in coming months as a part of the US-China negotiation process,” Bank of America Merrill Lynch’s Xiaojia Zhi said.

Hundreds of billions of dollars worth of tariffs levied between China and the US have exacerbated a policy-engineered slowdown in the country. Apple, Samsung and a string of other major companies around the world have recently warned of weakening Chinese demand.

“The current US-China trade war, which broke out in 2018, obviously was not the trigger,” UBS analysts wrote in a recent research note. “Underlying the development, instead, are a couple of structural factors.”

JPMORGAN: One slice of the stock market is set to explode higher — here are the 5 reasons, and how you can get involved

William Barr confirmation hearing: If Trump pardons for silence, could be crime