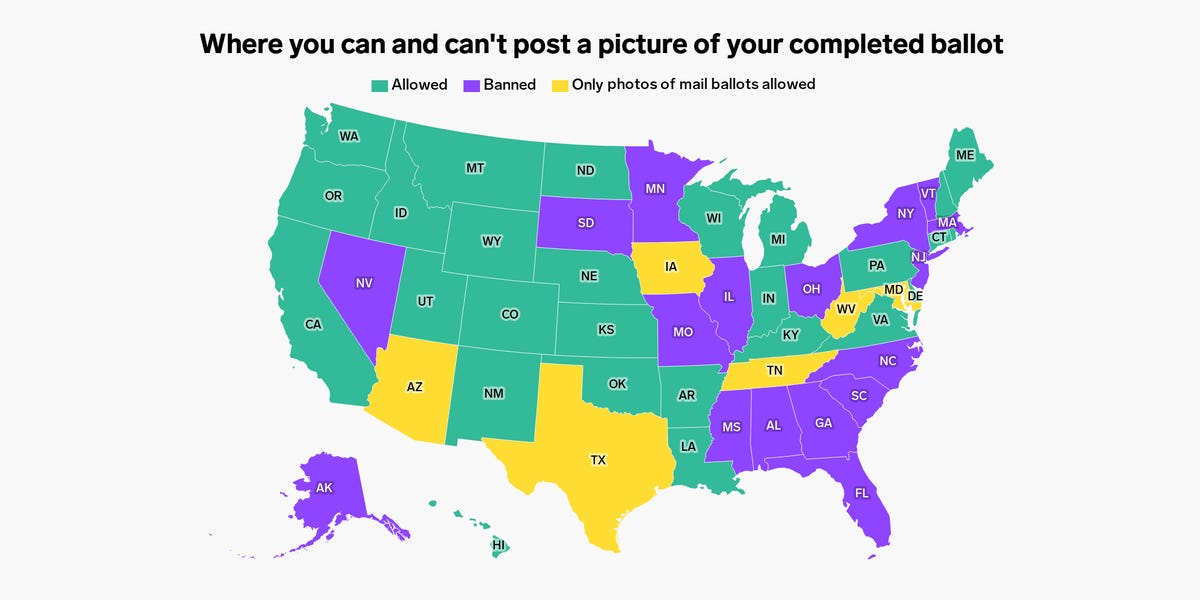 A record number of Americans could cast ballots by mail or early this year, and due to the COVID-19 pandemic, Americans are increasingly turning to social media to show that they voted.

Lots of excited voters are already posting photos of their mail-in or in-person ballots online. But taking a photo of your marked ballot and posting it on social media, sometimes referred to as a “ballot selfie,” could be illegal in your state.

While most states don’t ban posting ballot photos on social media specifically, many have laws prohibiting voters from showing their marked ballot to others, laws that were enacted to protect voters’ right to a secret ballot and to discourage bribery, vote-buying, and voter coercion.

Some states, like California, Colorado, Hawaii, Nebraska, Oregon, and Utah, have recently updated their laws for the social media age by enacting legislation to explicitly allow voters to post pictures of their marked ballots, while other states have passed laws further restricting photography and phone use at polling place, according to the National Conference of State Legislatures.

Issues around ballot selfies have also been recently been litigated in court.

After New Hampshire passed a law explicitly banning ballot selfies on social media in 2014, it was struck down by a federal appeals court, which ruled that the law violated the 1st Amendment right to freedom of speech, and that lawmakers had insufficient evidence to prove that such a measure was necessary to prevent vote-buying.

David Levine, the election security fellow at the Alliance for Securing Democracy and a former election official in Idaho and Washington, DC, told Insider that the debate over ballot selfies is likely to become even more potent in the future as voting from home becomes a more accessible and popular option to cast a ballot.

“There are some folks who express concern about ballot secrecy and coercion, but there are others who say that people who want to should be able to take that risk…of losing their own right to privacy,” Levine said. “It’s really important for voters to have a real understanding of what doing something like that entails and what applicable state laws are in place.”

While rules around ballot selfies can be difficult to enforce and it’s rare for states to prosecute voters for posting photos of their ballots, you’ll want to make sure not to do anything that could lead to your vote being challenged or even thrown out.

In the 2016 election, pop star Justin Timberlake caused a stir by taking a selfie of him casting his ballot while voting early in his hometown of Memphis, which could have run the risk of violating a state ban on voters taking photographs in polling places.

In addition to laws against publicly showing how you voted, there are many states that restrict voters from taking pictures or using their cellphones within polling locations themselves to protect the privacy of other voters and their voting choices.

“As a former state and local election official, another thing we had to sometimes deal with too was not only just somebody capturing a picture of their ballot, but also what else they might capture a picture of in the polling place that
could run the risk of capturing other people’s information,” Levine said.

Even before the pandemic, election officials have cautioned that voters taking time to snap photos or selfies at polls could lead to longer lines and less efficient service at in-person voting locations.

This year, with many localities likely to have fewer in-person voting locations available due to the pandemic, election officials are encouraging voters to be as mindful as possible of how much time they take to vote — including getting the perfect angle and lighting for a selfie.