Early Netflix original and idiosyncratic comedy darling Unbreakable Kimmy Schmidt released its final episodes on Friday, including an hour-long Sliding Doors foray into what the characters’ lives would look like if Kimmy (Ellie Kemper) had never been abducted in the first place.

The episode is at once everything we expect from Kimmy – hyperbole, wordplay, and the exaggerated characters we’ve come to love – and a remarkable opportunity for the cast and writers to flex their talents in a new version. Kimmy is self-involved and dispassionate; Titus (Titus Burgess) is a successful actor pretending to be straight; Lillian (Carol Kane) finds her niche as a drug lord, and Jacqueline (Jane Krakowski) finds herself unhappily married to the closeted Mikey (Mike Carlsen).

Mashable spoke to series creator and executive producer Robert Carlock about the episode’s origins and message, the future of the Kimmy-verse, and why we’re still stuck on Sliding Doors.

In 1998, Gwyneth Paltrow starred in Sliding Doors, a movie which establishes two diverging paths her life could have taken starting with catching a particular train before the doors slide shut. Per the mythology of Unbreakable Kimmy Schmidt, 1998 was the same year that Kimmy was lured into the bunker by Reverend Richard Wayne Gary Wayne (Jon Hamm) and held hostage there for 15 years.

“For a while it was just a joke in the room that the idea that Kimmy…basically in passing we were trying to work into an episode just as a joke that Kimmy mentions ‘Oh the day I was kidnapped I was supposed to go see Sliding Doors,’” Carlock explains, calling it a “sign from God” once the writers learned that the math worked out. “And then just the joke of what that meant, of a movie that’s about a character taking two different paths and letting us see another path for Kimmy.”

The fascination with a Sliding Doors premise – a.k.a. prompting the question “What if things had been different?” – is one long-harbored in television. It inspired a Broad City episode, contributed to The Mindy Project (along with It’s A Wonderful Life), and arguably comprised the entire final season of Lost.

“What would tell us we’re in a different world while also feeling like it’s connected to who these people are or could have been?”

“It’s such a human thing, to imagine whatever stage in your life ‘what if’…” Carlock says. “It’s kind of daunting and scary to think about, and in television you can go and explore that both as a creative exercise and for us as kind of as a piece of our theme.”

The episode deals with divergent paths, but also dabbles in the Butterfly Effect; Kimmy going to see Sliding Doors ends up directly affecting TItus, Jacqueline, and the rest.

“We never wanted Kimmy to be this kind of magical good witch who comes in and makes everyone’s life perfect, but we did want it to be – you know how you tell yourself all the time, ‘Okay, it could be so much worse,’” Carlock says. “Without her, without waking up to her goony face, Titus doesn’t have that same spur and neither does Jaqueline and neither does Lillian to sort of say ‘All right, look what this person’s been through.”

“That has always been a big part of the show; if only we all had a Kimmy to wake up to,” he says.

Beyond that, it was as simple as taking a big swing, the writers emboldened by five seasons and characters who feel lived in, yet still offer unplumbed depths.

The intent of the episode was never to suggest that everyone’s lives would have been worse if Kimmy weren’t abducted. As we saw in Sliding Doors, even an ostensibly better timeline has its bumps and complications. In one you end up in the bunker; in another, as Carlock points out you might be murdered by the cable guy.

“We never want to say that the experience she had in our usual reality was a positive one, but it was one that proved to her how strong she is – what if she never had to prove that to herself, and people just kept giving her stuff. What kind of entitled white kid would she be?”

Entitled Kimmy Schmidt doesn’t combat adversity with positivity; she deflates in its face and resents anyone and everything that she thinks shaped the course of her life – except her own actions. By the end of the episode, Unbreakable Kimmy is as we know her; full of hope and gratitude without fixating on the past.

“In a world of infinite possibility, you would go insane thinking about the mistakes that you’ve made. How do you balance coming to terms with things that have happened to you or mistakes that you’ve made and the fact that you are who you are …that’s always been sort of what Kimmy has struggled with. The episode was a fun way I think to shine a light on that.”

“When we sat down to write the pilot we felt capable of doing it because there is a truth underlying what Kimmy went through,” Carlock recalls. “It’s something that Tina and I were interested in talking about and then Ellie was an amazing vehicle for getting at these kind of weighty things in our comic way.”

Even when it premiered, Kimmy was hailed as a show about a survivor and her PTSD was never far from the surface in any given storyline.

“We never really meant for the show episode to episode to be topical, per se,” Carlock says. “Our characters are kind of liminal and disenfranchised and hand-to-mouth and they’re not thinking about the issues, and we always wanted it to be about their little weird lives.”

At a New York City panel in 2018, the Kimmy Schmidt team said they had hopes for doing a movie one day, about which Carlock is optimistic. Nothing is official yet, he says, but Netflix likes the idea.

The final episodes of Unbreakable Kimmy Schmidt are now streaming on Netflix. 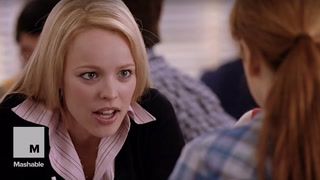 What the hell is going on in ‘Serenity,’ an explainer

2019 could be another “good” year for LGBTQ people in film