“The man is a clown. He goes charging around the speaking platform, like that at every rally […] He’s a clown, so what? […] So people want a giggle or two. Even more, they want to thumb their noses at a political establishment that doesn’t seem able to solve anything.”

It would be easy to mistake that as an old quote about Donald Trump. Maybe a comment from a political analyst in the early stages of his campaign. Maybe a line from an interview with a member of the public discussing the ever-increasing popularity of his 2015 rallies.

Despite the similarities, that’s actually a line spoken by a character in the 1979 Stephen King novel The Dead Zone.

The man being referred to is the fictitious Greg Stillson: a ruthless salesman-turned-politician whose eccentric stunts and anti-establishment rhetoric helps him amass a huge public following.

Basically, a man who goes from businessman (and real-estate broker) to politician and takes Washington completely by surprise.

Populist demagogues like He Who Must Not Be Named aren’t a new thing; see THE DEAD ZONE, published 37 years ago.

I first read The Dead Zone a few years ago, when Donald Trump was nothing more than a very minor blip on the political radar. Not long after summer 2015, though — once he’d announced his candidacy and footage from his rallies began creeping into the news almost daily — the novel floated back into my mind.

The story is about a man who gains precognitive powers after coming out of a four-year coma. He wakes up and finds he can predict the future.

Ironically, the novel itself seems to have a similar power. Greg Stillson’s rise to popularity — from an outsider who’s treated as something of a joke to a genuine political threat — is almost prescient in its evocation of Trump’s rise. Stephen King himself tweeted about the similarity last year, and many of his fans have been saying it for awhile now.

Does Donald Trump make anyone else think of Greg Stillson?

From the hectic rallies to the media and public perception, I’ve rounded up some of the similarities between The Dead Zone‘s narrative and Trump’s rise to power.

A shared obsession with greatness

When Greg Stillson is first introduced to us in The Dead Zone, he’s a young salesman obsessed by the idea of his own greatness.

The word “greatness” is repeated twice in the short chapter. There’s the sense that Stillson is “not content” with his current life, and is prepared to take on anyone who tries to get in the way of his ambitions.

This idea of greatness also pervaded Trump’s campaign. It was his main slogan. He tweeted it, he had it branded onto baseball caps, and he belted it repeatedly from the podium at rallies. Like Stillson, he seems obsessed with his own future achievements.

Admittedly the comparison between Stillson and Trump’s character traits only goes so far — the former is a borderline-murderous sociopath from a working class background, whose rage seems largely driven by his relationship with his father — but they’re undeniably alike in their ambition and self-assurance.

And when you come on to their political styles and public perception, that’s when the real similarities start to show.

The description of Stillson’s political rallies — the huge crowds; the chanting; the atmosphere — will be eerily familiar to anyone who watched Trump on TV during his campaign.

In The Dead Zone, Stillson generates interest and media attention by putting on a show. He works the crowd up into a frenzy, he bellows anti-Washington rhetoric, and he makes people laugh with his eccentricities.

Remind you of anyone?

One of the reasons for Stillson’s political success is that he’s seen as a man of the people. He’s united with them in their anger over the existing political establishment. The first of his five main campaign points is “THROW THE BUMS OUT!” — something he promises to do as soon as he gets to Washington.

Once he’d sewn up his Republican candidacy, this was exactly the tactic Trump used. The slogan was different — instead of “THROW THE BUMS OUT” it was “DRAIN THE SWAMP” — but the strategy was identical.

The reaction from other politicians

When Stillson is campaigning for the House of Representatives as an independent and gaining in the polls, his rivals do their best to belittle and dismiss him.

One of the descriptions in particular — “a cynical carnival pitchman” — is almost creepily similar to the rhetoric the Democrats used against Trump back in November 2015.

The changing reaction Trump received from his rivals during the course of his campaign is almost perfectly predicted by what happens to Stillson in The Dead Zone. At first he’s dismissed as a joke, and then all-too-late his rivals realise they’ve underestimated him.

When reporting on Stillson’s rallies, the media treat him as a bit of comic relief. He’s described as “eccentric,” people laugh at him, and his whole campaign is seen as something of a joke.

Obviously the media has been highly critical of Trump over the last year, but back in the long-ago days of summer 2015 his media image wasn’t all that different to Stillson’s.

Like Stillson, Trump was described as “eccentric.” There were articles about him pulling a woman up on stage to touch his hair and prove it was real. Rather than being seen as a serious contender, he was treated by the press as an amusing sideshow.

Ultimately, though — again, like Stillson — he reaped the rewards of this attention.

How the public reacts to him in the beginning

The way the public react to Stillson is perhaps The Dead Zone‘s most accurate premonition. Spoken by a Republican character to the novel’s protagonist Johnny Smith, the speech above is a hauntingly accurate portrayal of how a huge section of the American public would one day react to Trump.

There’s the amusement — “I’m a Republican myself, born and bred, but I must admit I get a kick out of that guy Stillson,” says Roger, the character speaking above — but there’s also a sense of extreme frustration with the status quo.

How his fans react to him further down the line

Without wanting to give away the story’s conclusion, Greg Stillson never reaches the White House in The Dead Zone. Towards the end of the novel, though — as his popularity is at its peak — we get a chilling insight into how his feverish public adoration has mutated into something violent.

The line highlighted in the passage above is spoken by a small-town pub owner. It’s delivered casually — almost in passing — but it brings back memories of the Trump supporter who attacked a protester at a rally, and the grim threats regularly made by pro-Trump trolls on social media.

On November 9th, if Trump loses, I’m grabbing my musket.

Ultimately The Dead Zone is a long way from an exact foreshadowing. The comparisons only go so far. It’s just a story.

But for a story published way back in 1979 — a full 36 years before Trump stood on a podium in front of four U.S. flags to announce his candidacy — it’s chilling in its accuracy. 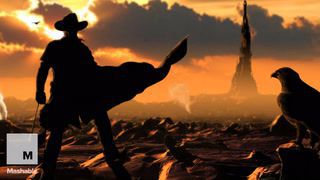