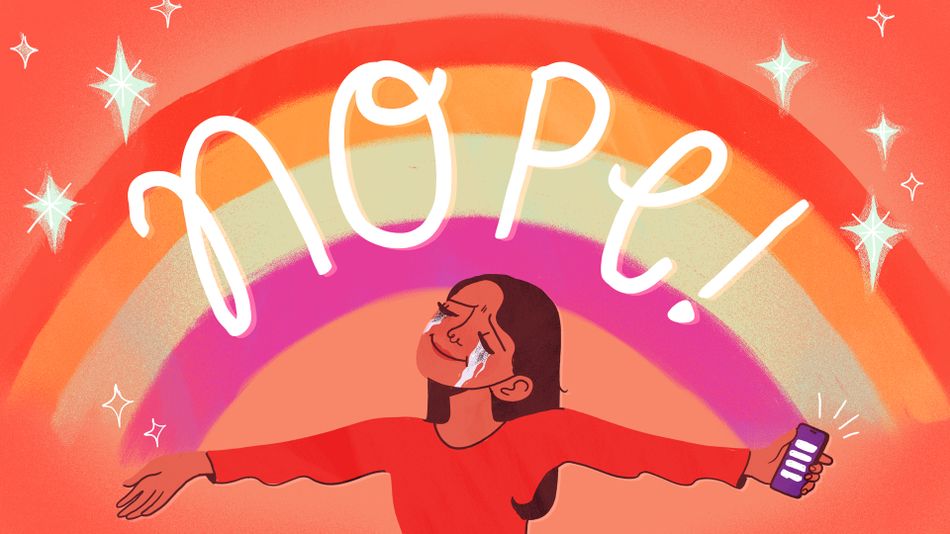 Lest we enter a new decade without acknowledging the great NOPEs of 2019, here are 10 entertainment moments that overwhelmed us in the best way this year, in no ranked order.

In the lead up to its final season, The Good Place pulled its usual tactic: It pulled the whole damn rug out from under us. The gang is tasked with creating a fake Good Place and redeeming the humans who populate it, but Chidi realizes that he’s ethically compromised by one of them being his ex-girlfriend. He asks Eleanor to reboot him, for the sake of the experiment — but at the cost of all his memories of their relationship. If it’s meant to be, they’ll find each other — after saving the universe and everyone in it.

If you don’t watch Phoebe Waller-Bridge’s pitch-black Amazon comedy, you’re probably tired that most of 2019 has been dominated by it yet still know the perilous significance of when the Priest (Andrew Scott) catches Fleabag (Waller-Bridge) breaking the fourth wall to talk to the audience. “What’s that?” he says. “Where’d you just go?” It’s not about the audience, but about Fleabag dissociating from herself in moments of emotional vulnerability like those she shares with the Priest himself.

Jane the Virgin has made Mashable’s NOPE list every year since its inception, and 2019 was no exception with Michael Cordero back from the dead, suffering from amnesia, and eventually getting his memories back and falling in love with Jane all over. Brett Dier’s meticulous performance as “MichaelJason” heartbreakingly fuses the man we knew with the man he became thanks to Rose’s meddling, and we found ourselves caught, once again, between Michael and Rafael — Jane’s past and Jane’s future.

4. The final scene of Avengers: Endgame

There were a lot of things in Avengers: Endgame that attacked us personally, but none moreso than the film’s final seconds (before the credits). Captain America, tasked with returning the Infinity Stones to where they were originally found in time, takes a little detour on his way back to the present to live out his lost life with Peggy Carter. The last scene of Endgame has no dialogue; it catches up with Steve and Peggy, at an unspecified point in time, dancing alone in private, sharing a long-awaited kiss. It’s so beautiful it hurts (probably because of the timey-wimey stuff), and we couldn’t handle it.

5. Hustlers: Climb in my fur

Hustlers may be based on a true story, but the screen version was less concerned with retelling facts than with shameless Jennifer Lopez-based fan service that we all received with joy. There are too many glorious nopes in this movie to choose from — J-Lo’s intro scene, her dance tutorials, her jaw-dropping wardrobe — but we’re going to go with the iconic “Get in my fur”: A moment of kindness that Ramona (Lopez) shows the intimidated Destiny (Constance Wu) while also enacting some light wish fulfillment for us all.

Marc Maron’s curmudgeonly producer Sam was always GLOW‘s bitter, practical pill, but he’s softened ever-so-slightly over the course of three seasons as a colleague of women and father of daughter Justine (Britt Baron). Season 3 sees Sam striking out professionally and personally, but it doesn’t defeat him the way it once would have. He channels his efforts into helping Justine’s career, and at Christmas, presents her with adoption papers. It’s a big step for a man who would’ve run entirely the other way from a fatherhood three seasons ago.

“As if” is not a Clueless line I expected to hear sexualized in the year of our lord 2019 by none other than ageless snack Paul Rudd himself, but the moment those words in that inflection escaped Rudd’s lips it became clear that this was always where we were heading (and he has, perhaps, been asked to say this before).

8. The Mandalorian becomes a father

Two months ago, Star Wars fans would probably have rolled their eyes at an entire show based around a bounty hunter caring for a space bebé, but from its first episode of Disney+’s The Mandalorian made an adorable case for itself and delivered with each week. We were in the moment he found “the asset,” but the point of no return was in episode 2, when the Mandalorian (Pedro Pascal) and Kuiil (Nick Nolte) discuss what to do while Bebé catches a lil’ frog.

Spoiler: Bebé does not.

When Castle Rock got its second season, it was made clear from the outset that this would be an anthology, not a sequel. No creepy schisma, not hot devil Bill Skarsärd, but an all-new story and cast of characters. All that went out the window in Season 2, episode 7, when a flashback to Castle Rock’s past reveals a cult worshipping “the angel,” who turns out to be none other than the Kid himself. We were lied to, we were furious, we were terrified — and we couldn’t wait to see where this messed up show took us next.

The sweater heard round the world (or at least a very specific Chris Evans Twitter hive) appears less than halfway through Knives Out, when Ransom (Evans) helps Maria (Ana de Armas) escape his family’s squabbling over a will. The sweater deftly negotiates the tricky terrain between fall and winter, carrying the wholesome American appeal for which Evans is known while also making the dickish Ransom attractive in exactly the wealthy batboy way that he no doubt coasted on his entire life. And have we mentioned the four beer bottles?

Galaxy’s Edge Datapad is a secret weapon for immersion.