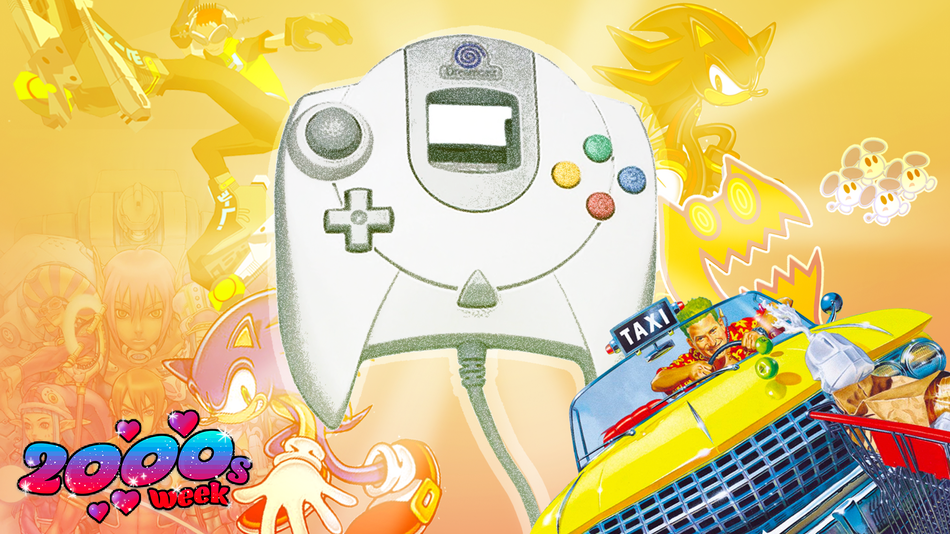 Welcome to 2000s Week! We’re exploring the pop culture that shaped us at the turn of the millennium, and examining what the films, shows, and games from the era say about us then and now. It’s a little #tbt to the days before #tbt was a thing.

At the turn of the millennium, Sega’s Dreamcast emerged.

Like the sun cresting over the eastern horizon heralding a new day, the Dreamcast’s North American release in September of 1999 heralded a new era of gaming. It was the first console with online capabilities, even including a web browser. It supported file management and data transference. It was a bastion for creativity and experimentation in games. In many ways, it was ahead of its time.

But perhaps it was too far ahead of its time. For all its innovations, the Dreamcast also marked the end of Sega’s storied run in the console wars. Over 18 years, Sega went toe-to-toe with Nintendo in an arms race over ever-improving graphics, iconic mascots, and outright aggressive marketing. Sega was already slipping with the Sega Saturn’s failure in the mid-90s and the introduction of Sony’s PlayStation around the same. The Dreamcast couldn’t stand its ground in the new millennium against the hype behind the PlayStation 2, Xbox, and Nintendo GameCube that would release over the following two years, giving way to the trifecta’s console competition that has remained constant for the last 20 years. The only official Sega hardware you can find these days is for resale on places like eBay.

In the days since its demise just two years after its launch, the Dreamcast has largely been derided as a failure. It’s a punching bag for jokes and ridicule. To the vast majority of gamers, it’s about as good as a brick.

While many criticisms of this console are valid, it also brought a lot things to the table that, due to its commercial failure, have been swept under the rug. We cannot deny the impact it had on the 2000s and its delicate usherance of a new generation of gaming.

Sega’s Dreamcast was the first console to come with an internet modem, allowing players to connect the console to their network and play certain games online in real-time, including the first-person shooter Quake III Arena, a handful of sports and racing games, and Phantasy Star Online.

Before the Dreamcast, the only way to play most games online was on computers. Even as the internet proliferated throughout the ‘90s, online gaming options were pretty limited and figuring out how to play them was sometimes convoluted, sometimes even impossible outside the West.

But with the Dreamcast, options for gamers who wanted to play online began widening. The ease of connecting through a console with built-in internet capabilities opened up this newer avenue to more people who weren’t hardcore enthusiasts. It took a few years before developers really picked up the baton with which the Dreamcast started running.

Meanwhile Phantasy Star Online opened up online role-playing games outside of western PC players. Although the Dreamcast’s online support was killed just two years after its release, Phantasy Star Online had staying power and branched into a thriving series of games, coming to PC, Xbox, and Nintendo consoles. Other multiplayer RPGs followed with wide success, including games from the Monster Hunter and Final Fantasy series.

Not to mention, the Dreamcast was the first home console to support downloadable content. Sure, the content was pretty small due to hardware limitations, like Jet Set Radio’s downloadable graffiti artwork, but the implications were huge. It meant that developers could create new content or alter their games after release, which happened more and more throughout the 2000s until downloading updates for games became a normal part of the gaming experience.

Without the Dreamcast taking the plunge into the murky depths of online gaming, we wouldn’t have seen the 2000s progress the way that they did, eventually leading to the gaming landscape we see now.

Every new game that comes out is an experiment. Whether from the smallest, most under-funded indie developers or the biggest multi-million-dollar corporations with thousands of employees, each game is an attempt at crafting an experience that lives up to its developers’ visions.  Whether those experiments are successful is unknown until the public gets its hands on it.

Some games are more experimental and innovative than others. With the Dreamcast, there were a handful of games that explored some really unique ideas, and while many of them didn’t achieve much notoriety, they stand as these beacons of creativity that helped shape game experimentation in the 2000s.

ChuChu Rocket! is one such game. This , competitive, multiplayer, puzzle game is a testament to the freedom that Sega gave developers. Players have to direct mice around a board and into their rocketship while trying to block cats from pulling them out of their rocketship. It’s weird, it’s hectic, and it’s an unexpected approach competitive multiplayer.

Games don’t need to be straight-forward or broadly appealing

Jet Set Radio, one of the best games of its generation, was a fountain of creativity in a different way. Not only was this anarchist, graffiti-forward game a refreshing theme for gaming, it was also one of the first games to use the bold, cel-shaded art style that inspired the art styles of legendary games of the 2000s like The Legend of Zelda: The Wind Waker, No More Heroes, and Sly Cooper.

The Dreamcast also helped bring Sonic the Hedgehog into a new space, transitioning from 2D to 3D with Sonic Adventure. This change completely altered the trajectory of the series, giving way to one of the best Sonic games, Sonic Adventure 2: Battle, while simultaneously opening the floodgates to some atrocious entries like the dubious 2005 action game Shadow the Hedgehog, the reviled 2006 game Sonic the Hedgehog, and the bizarre 2008 game Sonic Unleashed.

And then there are the games Rez and Seaman, each of which digs into its own bizarre space. Rez is a rail shooter that has pretty familiar and straight-forward mechanics but blends it with some surreal, trippy visuals and rhythmic sound elements that makes each piece of the game bleed into the next. Seaman is a game where players use a microphone peripheral to chat with a fish that has a human face, taking the Tamagotchi craze of the mid-’90s and twisting it into this visually unappealing and gameplay-lite experience that almost seems like it never should have released. But it did.

Even if they weren’t exactly successes, games likes these on the Dreamcast helped push the medium forward into new directions. Games don’t need to be straight-forward or broadly appealing, they can be weird as hell and the Dreamcast was an early adopter of that idea.

Yes, the Dreamcast failed commercially, but without the Dreamcast we may not be where we are today. The proliferation of online gaming throughout the 2000s, the abundance of weird experiments from game developers both in and out of the indie space, the way gaming looks as we know it just wouldn’t be the same without this humble console.

2000s things we miss, from iPods to MySpace Tom