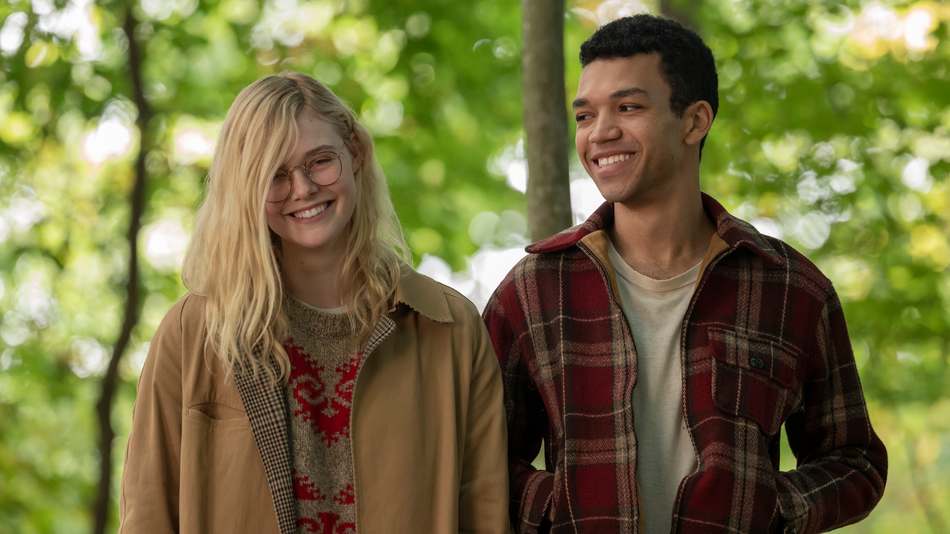 With an ambitious script, pitch-perfect soundtrack, and heartfelt performances, Netflix’s All The Bright Places shows great attention to detail.

From the top of Hoosier Hill to the dark waters of the Blue Hole, Violet Markey and Theodore Finch’s Indiana-set romance is faithful with every frame. Elle Fanning and Justice Smith are cast perfectly, and their intimate exchanges directed well. Pick a clip from any scene and it feels like the book — a book loved by so many that its adaptation’s release inspired countdown posts across social media this past week.

And yet, when viewed as a whole, Netflix’s take on Jennifer Niven’s YA novel lands like big-budget fan art. Yes, it captures the overall spirit of the coming-of-age story and recreates iconic moments with admirable affection.

But the movie misses the enchanting nature of Niven’s original words, a disappointment that’s made worse by the author’s role in creating it.

Written by Niven and Golden Globe nominee Liz Hannah (The Post), the movie version of All The Bright Places introduces star-crossed lovers Violet and Finch differently from the novel.

Rather than clandestinely meeting atop a bell tower, each poised to take their own lives, Finch stops Violet from contemplating a jump off a bridge. (For Netflix subscribers calling All The Bright Places a romantic comedy, this is the first sign they are mistaken.) This plot change is one of several that chisels at the core of the pair’s connection and make its film portrayal less resonant.

As a novel, All The Bright Places approaches mental illness with a delicate touch. This story is a tragic tale of isolation and love lost set against the teenage years that’s occasionally cute but more often devastating. Finch and Violet begin on tonally different but equally dire footing in the book — with each protagonist battling their inner demons on their own terms.

Violet is wrought with grief following the death of her sister. Finch struggles with undiagnosed bipolar disorder and daily thoughts of dying by suicide.

The pair’s resulting romance dissects the healing nature of companionship and the toxicity of co-dependence in a manner that’s as relatable as it is romantic. The meeting on the bell tower helps both people in different but powerful ways, and the characters’ perspectives evolve in tandem.

In Netflix’s telling, a seemingly emotionally vibrant boy “saves” a broken girl from death — and his underlying illness isn’t presented until much later. Following the bridge scene, the film’s first 45 minutes play lopsided with much of the turmoil heaped on Violet’s shoulders. Finch’s desire to assuage her grief motivates the actions that introduce the couple and fundamentally unsettles our understanding of their relationship. We learn more about Finch’s torments in the second half of the movie, but it’s a poor start for new audiences that comes off as misguided (if not a bit sexist).

Still, the altered plot points and structure aren’t the adaptation’s biggest shortcomings in my mind. All The Bright Places loses the most from what it left out altogether.

It makes rooting for their romance nearly impossible

Telling a story about mental health from the perspectives of those struggling with it makes sense, and Niven’s novel capitalizes on the ease of first-person accounts. Violet and Finch’s inner monologues — they trade off narrating chapters — are exquisitely written with profound observations that have touched readers deeply.

In the movie version, the narration is nonexistent and the dialogue sparse. An orchestral score and montages of sun-soaked imagery fill the spaces where character development should be, and as a result, Violet and Finch come out under baked.

Of course, scripting narration isn’t easy. Voiceover can be a clunky device that slows down action and undercuts the overarching narrative. Still, one would think Niven would have made more room for her brilliant work in the film she wrote. Without these first-person insights, Violet and Finch come across as inauthentic, immature, and unrealistic. This characterization lands their partnership in problematic territory and makes rooting for them far less appealing.

Dear lovelies, from the start, every single person involved in the film has been dedicated to honoring their story, so that watching the movie leaves you with the same exact feels as reading the novel. I am so, so proud of this film, and I hope you will be too. 💜 pic.twitter.com/jbeUGFxWfS

Now, I believe everyone did their best to bring All The Bright Places to screen.

Director Brett Haley (Hearts Beat Loud) delivered beautiful scenes felt fully. Fanning and Smith acted fervently with distinct passion for their roles. Niven created this poignant world, and Hannah helped bring it to screen. Someone had to make all those Post-its, hang all those shoes, and find Fanning the perfect big frame glasses. Everyone making this movie seems to have loved it.

Sadly, I did not. For reasons I’ve already mentioned and some that are, yes, more subjective (“This wasn’t what I imagined,” “They cut my favorite line,” etc.), Netflix’s adaptation fell short of my hopes. I delighted in seeing certain moments acted out and I appreciate that the streaming platform will bring more people into this lovely world.

But for this reader and watcher, the cliché proved true: The book was better than the movie.

All The Bright Places is now streaming on Netflix.

Tesla will cut salaries to weather the coronavirus pandemic

Coronavirus: Boris Johnson in intensive care, not on COVID-19 ventilator

Tesla will cut salaries to weather the coronavirus pandemic

Coronavirus: Boris Johnson in intensive care, not on COVID-19 ventilator