HBO’s Deadwood is perhaps known best for its creative use of profanity, its poetic dialogue, and its showcasing of star Ian McShane’s considerable acting talents. But there’s a common refrain about the HBO series that tends to get shouted louder than any of those other points whenever the subject comes up: It died too young.

The show ended without fanfare in 2006 after HBO opted against a fourth season. Creator David Milch moved on shortly thereafter to the failed “surf noir,” John From Cincinnati. But fans have been chasing closure on Deadwood ever since.

Well, it’s finally happening. On May 31, HBO will release a two-hour Deadwood movie set 10 years after the events of the third season. I’ve seen it and I’ll tell you now: The movie doesn’t tie up every single thread left dangling when the show ended. There’s not enough runtime to pull off such a feat.

This is a much more focused story. Most of the main cast is still kicking around and pretty much everyone gets a moment. But with the movie now so close at hand, I thought it would be helpful to highlight some of the most important story threads informing this final chapter, for both newcomers and for longtime fans alike.

It was always about the community

At a high level, Deadwood the series is about the forward march of progress in a young and developing United States. It centers on a small mining outpost, unaffiliated with any U.S. state, as the community there reckons with the jarring shifts of a rapidly changing world. The various characters and their stories paint the picture of Deadwood as a crossroads between the violence and lawlessness of the Wild West and the civility of a settlement that’s just one cog in a larger, more strictly governed society.

The camp’s legacy is critically important to the movie’s continuing story.

The camp’s legacy is also critically important to the movie’s continuing story. Remember: this is the place where “Wild” Bill Hickok (Keith Carradine) was gunned down in cold blood. Bill’s old friend Charlie Utter (Dayton Callie) stuck around to settle down and honor the memory of the fallen gunslinger. Bill died in large part because he refused to get with the times, and now, so many years later, Charlie’s feeling that same pressure.

We know going in that the movie picks up in 1889, as the town is preparing to formally join the state of South Dakota. You probably remember such a possibility coming up again and again throughout the series. Al Swearengen, McShane’s character and a key figure in the community, fought hard during the series to stay involved in the process of future statehood.

By the time Deadwood ended, a modern world was already starting to creep in. A.W. Merrick’s (Jeffrey Jones) news operation focused more and more on news from outside the town. A telegraph station and a working theater settled in. The grade school class evicted from their classroom in a former brothel finally got their very own schoolhouse.

Deadwood, when we last left it, was well on its way to joining the civilized world. The movie shows us what all of those efforts led to.

When we first met Deadwood in Season 1, McShane’s Al Swearengen, proprietor of the Gem Saloon bar and brothel, was the camp’s chief protector. He kept the peace (albeit in a brutal sort of way) with his top guys Dan Dority (W. Earl Brown) and Johnny Burns (Sean Bridgers) backing him up.

Still, it was clear from those early episodes that Al’s no saint. He swindles and cheats. His mistreats his whores. He’s not above having people killed, or doing the deed himself — even when the targets are women or children.

That visage softened over time. Al never completely transformed into a better man, but the more time we spent with him the more we came to understand that he — like most people! — is complex. He committed great evils right up until the end of the series, but he also showed his capability for compassion and generosity, especially as his interests started to align with the rest of the camp.

Al’s biggest shifts as a character were in many ways prompted by the arrival of George Hearst (Gerald McRaney). The famed IRL mining magnate is Deadwood‘s chief antagonist throughout the third season and a looming threat before that, for much of the second season.

Hearst’s arrival marks a shift in Deadwood‘s power struggles. Al fights to protect his own: himself, his people, his business — and by extension, his community. Hearst, on the other hand, is committed to the pure pursuit of wealth, and through it, power. On the outside he’s civil and cordial, but deep down Hearst is driven by his selfish obsession and a willingness to stop at nothing to get what he wants.

The two men quickly find themselves at odds, with Season 3 delivering escalation after escalation until it all boils over in a tense confrontation in the season/series finale. Trixie (Paula Malcomson), one of Al’s former whores, shoots Hearst in the shoulder after a Hearst crony guns down the beloved character, Whitney Ellsworth (Jim Beaver).

Hearst demands blood and Al, who cares deeply for Trixie somewhere deep down, slits the throat of another of his flaxen-haired brothel workers. He stages the ruse hoping Hearst won’t notice when he arrives to inspect the body — and he doesn’t. The legacy of their strained relationship — and their last moments together in Season 3 especially — lingers on throughout the years and plays a big role in the movie’s story.

Love is in the air

Over the course of its three seasons, Deadwood charted the budding of a relationship between hardware store proprietor-turned-sheriff Seth Bullock (Timothy Olyphant) and Alma Garrett (Molly Parker), but it was a doomed affair from the start. Seth’s wife — his brother’s widow, Martha (Anna Gunn), whom Seth married out of loyalty — arrived in the camp at the start of Season 2.

The love triangle led to strained relations between these three pillars of the Deadwood community throughout Season 2 and on into Season 3. Alma eventually married Ellsworth, whom she had employed to oversee her gold claim, but it was just to keep up appearances; the affair with Seth left her pregnant.

She ultimately lost the baby but recovered her willful spirit in the process. Alma, a wealthy high-society type, established Deadwood’s first bank shortly before the series ended, and she continued on as its proprietor in the years that followed. Time smoothed over the tension between her, Seth, and Martha, but those memories linger.

The Bullock-Garrett-Bullock triangle wasn’t Deadwood‘s only love relationship. Late in the series, a connection bloomed between “Calamity” Jane Cannary (Robin Weigert) and Joanie Stubbs (Kim Dickens), the former madam at the Bella Union, a local casino/brothel and Gem Saloon competitor. It didn’t go very far — the series ended as it was just getting started — but there’s a lot of unresolved story to tackle there and both women returned for the movie.

Elsewhere, Bullock’s pal Sol (John Hawkes) eventually took up with Trixie. Their coupling was always a fraught one, due in large part to Trixie’s strong independent side, as well as her hesitance to settle into family life (a reluctance informed by her work history). By the time the series ended, theirs was another relationship left unfulfilled — and again, both are back for the movie.

There are plenty of other major players in the Deadwood community that return for the movie and have their own part to play in the camp-turned-city’s continuing story. But if you’re looking for a general sense of the movie’s focus, the above plotlines will put you on the right path.

Deadwood: The Movie comes to HBO on May 31. 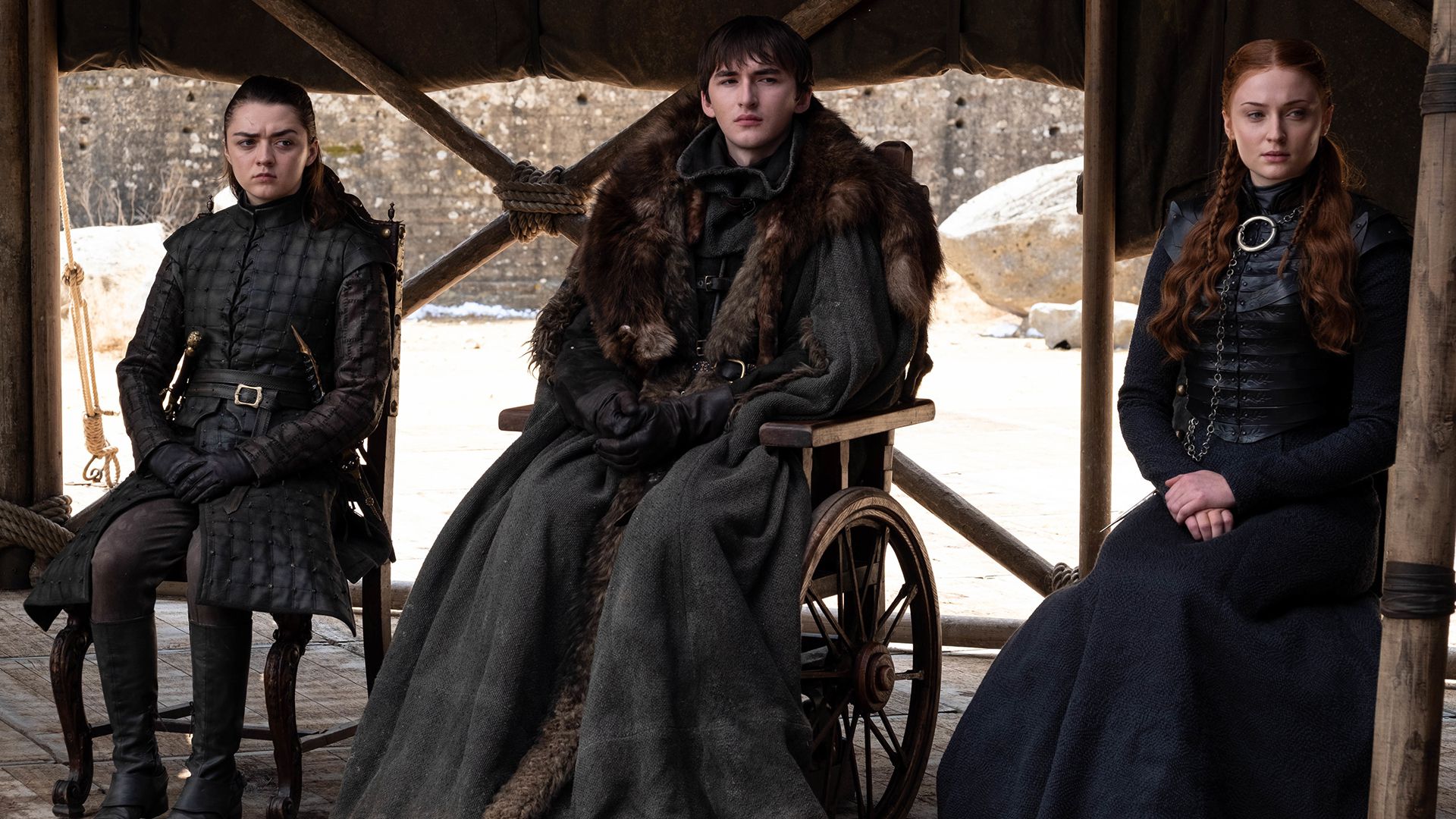 May 25 is Towel Day, and don’t ever forget it