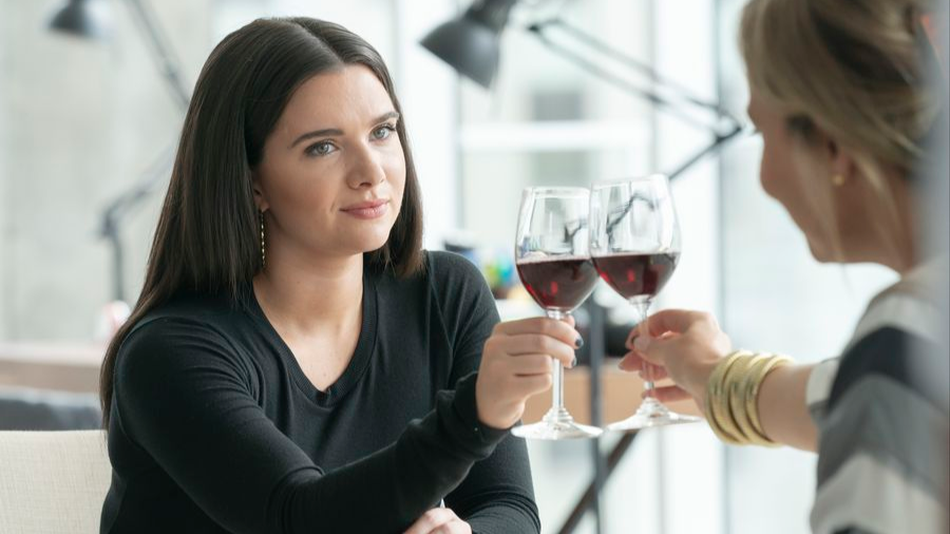 In just three seasons (churned out with the speed of Jacqueline Carlyle hitting “publish” on a Microsoft Word document), Freeform’s The Bold Type became the kind of chaotic TV confection we can’t imagine not having in our lives.

Based loosely on the New York magazine and media scene and with such brazen liberties as “the internet is bad,” The Bold Type is a show to fume at and adore in equal measure. To celebrate its Season 4 premiere, we looked back on three Bold seasons and the things we learned from this magnetic mess of a show.

If you’re not throwing your coffee down the staircase of Safford Tower and getting dressed on the literal streets of Brooklyn, are you really one of The Bold Type? Each episode, Jane, Kat, and Sutton have treated us to freeze frames of their greatest mishaps — sometimes with narration from Cosmo editor Joanna Coles or a miscellaneous British lady!

2. Yell at your boss always

OK, we’ll level with you. We’ve never actually screamed at our boss (enthusiastic brainstorming sessions about Captain America excluded.) But The Bold Type makes it look so easy, so fulfilling, so cathartic.

In Season 1, when Editor-in-Chief Jacqueline Carlyle spends yet another inordinate chunk of her time coaching Jane towards greatness, the twenty-something, at-will employee pops off and screams at her about a story she doesn’t want to write. Jacqueline suggests they talk in her office.

“Why?!” Jane asks her EMPLOYER. “We do all of this for YOU. And what do we know about you? Anything? Your secrets? No, of course not. Because that’s not how this ‘works.’ We’re just here to dance when you clap your hands, be your little writer monkeys, here to humiliate ourselves, to torture ourselves for YOU.”

Uh… !!!??? Jacqueline calmly tells Jane to “take a walk,” then invites her over for a fancy dinner where she introduces her kids, her husband, and her very fluffy dog.

Is that all it takes to get free dinner at your boss’s house? Well, Mashable’s Entertainment Editor Erin Strecker: Prepare some pizza rolls and a side salad, because these reporters are coming over. [Editor’s note: No.]

The authors might be in the minority on this, and we know that most people do have to dress up for their jobs in some sort of uniform or formal dress code — and that the pressure must only increase at a fashion magazine like Scarlet. However, as employees of an actual Dotcom, we can confirm that the standard dress code around here is business casual (emphasis on the casual in editorial).

The Bold Type usually airs in summer, when New York writers are out of hibernation and can actually be bothered to dress cute, but for six months of the year we’re all in sweaters and jeans that you can’t see anyway because they’re curled up under a Mashable-branded snuggie.

(This is less of a life lesson and more of a plea for Sutton to style us. Help us, Sutton Brady. You’re our only hope!)

Next to RJ Safford, “The Dotcom” is The Bold Type‘s Biggest Bad. Three seasons in, and we’re still not totally sure why that’s the case (guess the folks at Freeform are media purists?) But, we know that it is The Not Bold Type who settle for digital-only content.

Mashable has never had a print version, but we’d be fighting for it if there had been. In fact, this is our demand for a print publication. We’ll hand it out ourselves!

5. Journalism is just how you’re feeling

As journalists, who do journalism, we’ve seen enough film and TV to recognize that literally no one in Hollywood understands what it’s like to work in media. Fictitious reporters regularly turn in one piece every six months, sleep with their sources, or turn their actual life events into articles without considering any conflict of interest.

At the start of The Bold Type, Jane wants nothing more than to graduate from assistant to writer, and apparently the only thing standing between her and this job was that she had literally never had an idea before. Note to aspiring writers: If you want to write, you have to pitch! From then on Jane is a veritable pitch machine (one idea every few weeks, an output that would make her a very poor freelancer).

Personal essays and opinion pieces are just fine to publish, but that can’t be Jane’s only source of #content. Season 4 literally opens with her shamelessly floating a story about how she and her friends day drink while watching the local marathon, then a piece about her own sex life because what could possibly be more interesting? Jane, what you want is a book deal. Might we suggest a Younger crossover?

6. Ethics are for suckers

From the moment Richard Hunter and Sutton Brady made out in an elevator during that pilot, we knew The Bold Type would never shy away from the moral grays of business and journalistic ethics. Yet when any of these dilemmas do arise on the show, they’re almost always magically solved or simply ignored. The Richard story is a prime example, even if we love those two together.

Interviewing a source you know personally? Cool! Writing an explicit political endorsement? No problem! Running for political office on a whim? Okey-dokey! These political and journalistic no-nos are yes-yeses to the women of The Bold Type, especially in Season 3’s local election storyline. Jane suggests writing about one of the candidates with the express intent of securing a win, and Kat gets so invested that she ends up joining the race (and dating her campaign manager!).

In the digital age, a lot of these situations can be evaluated case-by-case, but we know how The Bold Type feels about digital.

7. Any shared office space is a private hangout if you’re brave enough

It takes a special kind of shameless audacity to a co-opt a public workspace to the point that others think of it as your private abode. Since Jane, Kat, and Sutton first entered the fashion closet in 2017 (2014 if we go by the flashback ep), we’ve had the insatiable urge to claim office territory.

Oh, you wanted to sit at that table? You can’t, it’s mine. You were trying to park your car there? Good luck, I’m having brunch there right now. You want me to get out of “your office” with “your name” on it? Nice try, my friends are in here!

8. Partying on weekdays is a thing

We’re not sure how time progresses on The Bold Type (has it been a year? Three years? Six months?), but we feel older since Season 1, and the characters don’t seem to. They’re still as game to stay out on a school night and stroll into work with a green juice at 9 a.m., while if the rest of us stay out past 9 p.m. without drinking three gallons of water we’ll have to be put on bedrest.

Remember Sutton’s clubbing days and how gallantly she handled them? We can’t even go back and rewatch those episodes without screaming for Excedrin and an entire pizza. Sutton’s fancy dinner at Richard’s should have lasted one hour, and one glass of wine per person (we fall asleep now!). At some point in your 20s, you become less of a bold type and more of an old type… and that’s okay.

9. Distance is a social construct

One of the most baffling things on The Bold Type and really any show about friends in New York is how quickly and willingly they’re able to cover the small yet insurmountable distances in this city. We do not leave our boroughs except for work (if that). We regularly go months without seeing close friends in the same neighborhood. We fail at making dinner plans with someone across town until eventually one of us dies. THIS IS THE WAY.

But on The Bold Type, true friendship is Kat taking either a pricey car or hourlong subway rIde to Brooklyn on a weekday morning to make breakfast with her besties, and the three of them then schlepping back to Scarlet’s Midtown Manhattan office IN at rush hour to start the workday. Crunching the numbers, this requires Kat to wake up at roughly 5.30 a.m. Bless you if you love anyone enough to do this.

10. Everything (and we mean EVERYTHING) works out

If you leave a multi-thousand dollar necklace in a cab, you’ll get it back. If you send a woman with a suitcase full of contraband to Iran, she’ll be fine. If you fall in love with your company’s hunky in-house attorney, he’ll poo-poo the age gap and buy you a house in Connecticut.

For the women of The Bold Type, everything works out always — no matter the stakes, no matter the setting, no matter the consequences, always. One could look at this optimistic narrative compass and choose to see it in a realistic “reach for the stars” kinda way.

Or, you could see it as blatant encouragement to put your career and emotional well-being at risk constantly. Poison somebody! Try a Yoni egg! Let someone buy cocaine with your company card!

Either way, you’re … THE BOLD TYPE.

The Bold Type airs Thursdays at 9 p.m. on Freeform.