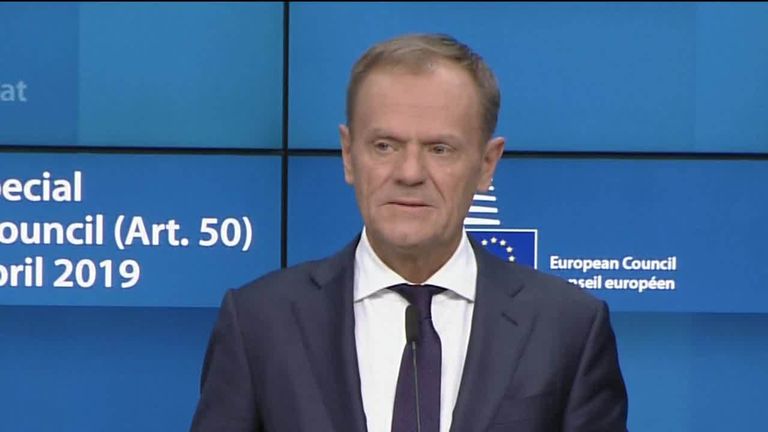 Theresa May has confirmed she plans to call another vote on her Brexit deal “soon” – but MPs have been granted an Easter recess so they can take time to “reflect on the issues”.

Returning from Brussels after EU leaders agreed to delay Brexit until 31 October, the prime minister was welcomed by some in parliament but faced wrath from others.

Mrs May told MPs they had a “national duty” to pass a divorce deal as soon as possible – holding out hope that Brexit could happen before 22 May so the UK can avoid participating in the European parliamentary elections.

She promised that parallel compromise talks with Labour would be pursued in a “constructive and positive fashion” as officials from both parties continued their negotiations in Westminster.

Jeremy Corbyn responded by calling for “all options to remain on the table”.

Labour MPs also lined up to criticise the prime minister for refusing to reveal what “red lines” she would drop to secure their support.

Meanwhile Arlene Foster, leader of the DUP, headed to Brussels to pledge that its opposition to the withdrawal agreement “won’t diminish”.

And Tory Brexiteers repeatedly slammed Mrs May for refusing to pursue a no-deal Brexit. Mark Francois accused the prime minister of “sheer obstinacy”, while Sir Bill Cash called on her to resign.

According to Sky sources, Whitehall has stood down its operational planning for a no-deal Brexit.

With the pressure of an imminent Brexit lifted, MPs were given the remaining two weeks of their Easter break from parliament – prompting cheers to erupt in the House of Commons.

Commons leader Andrea Leadsom confirmed MPs would rise at the close of business on Thursday and return on 23 April, subject to a motion being approved.

In a briefing with journalists, Mrs May’s spokesman said: “Fundamentally probably people could use a break and I’m sure you would all agree with that.”

The spokesman was also asked if the prime minister was preparing to bring back a meaningful vote on a Brexit deal soon.

“I think that’s a good way of describing our intentions,” he said.

As the recess begins, the clock continues to tick down to European Parliament elections being held one month later.

Downing Street admitted talks with Labour would not continue “for sake of it” and stressed an “urgency” to avoid participating in the European elections.

However, contingency plans have been implemented for Britons to re-elect over 70 MEPs to the chamber in Strasbourg.

The Conservative Party has also declared it will field candidates in the election.

Britain is now due to leave the EU in over six months’ time, with the leaders of all 28 countries due to meet in June to take stock of the Brexit process.

If Mrs May manages to get her divorce deal ratified by parliament before then, Brexit could happen earlier.

She has lost votes on it three times – the first marking the largest Commons defeat suffered by a prime minister in history.