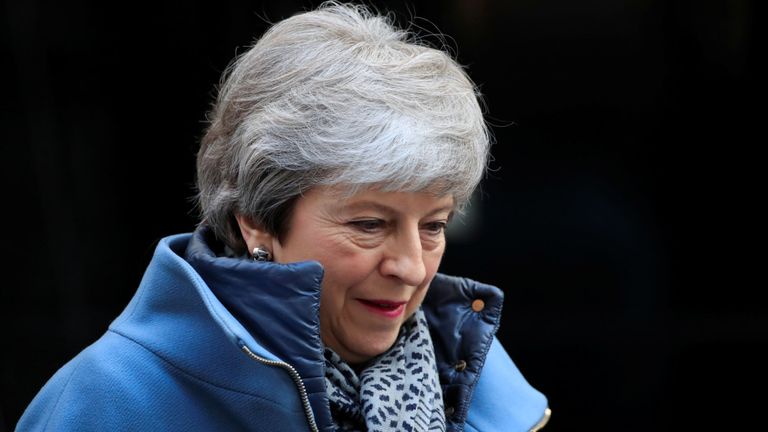 Theresa May has agreed an extension to the Brexit date, meaning the UK has another six months to secure a deal.

As soon as MPs pass a deal in the Commons that has been agreed with the remaining EU27 countries, the UK will leave the European Union.

Sky News looks at what happens in the next few weeks and months now that the next delay to Brexit has been confirmed.

Mrs May returns to the UK and gives a statement to the House of Commons about her latest summit in Brussels.

Cross-party talks continue with Labour in light of what happened at the European Council.

A number of local authorities in England and Northern Ireland holding elections on 2 May in the UK this year. They include 33 metropolitan districts, like Gateshead, Liverpool, and Stockport, that elect members by thirds.

The local elections will not have any direct impact on Brexit, but they are often seen to provide a reflection of the mood of the nation.

The two main parties will be keen to hold on to and increase their share, and will view it as a further mandate to their Brexit course if they do so.

There is also speculation that anger with the main parties in parliament, who are at the helm of the Brexit negotiations, will reflect in votes cast to other parties, spreading votes across more parties than usual.

There are several key dates related to the European elections. The first two are 12 April and 15 April, which is when the UK has to give notice of an election to voters.

Most of the UK has to give notice by 15 April, but the south west constituency, which includes Gibraltar, is meant to give this notice by 12 April. That’s the same date the EU gave for its first extension on Brexit.

The next key dates are 23-26 May, when voting will take place for MEPs across European Union states.

These dates vary because each country holds the elections on the day of the week it usually goes to the polls.

For the UK, this would be 23 May, the Thursday of that week, which is why the EU gave Mrs May the leaving date of 22 May if she had got her deal over the line in parliament.

The UK will return 73 members in the elections and they would take up their seats in the parliament by the beginning of July.

Unlike the British parliament system, the European Parliament does not dissolve, it merely rises while elections go on. The new set-up is then formed after the votes are counted and finalised.

The UK could leave the EU at any point having returned MEPs, and so new members should not get too comfortable.

The government has promised to reimburse local authorities for costs incurred in running the elections if they do not take place.

If the UK fails to hold European Parliament elections, it will be breaching its obligations as a member of the bloc and will be kicked out of the EU by 1 June.

However the UK’s notice of poll has been given and therefore election preparation is under way. It is highly unlikely the obligation will not be fulfilled.

This date is also one Mrs May believes the UK could leave by if a deal passes through parliament in the first three weeks of May.

In her statement after the summit, she said: “If we are able to pass a deal in the first three weeks of May, we will not have to take part in European elections and will officially leave the EU on Saturday, 1 June.”

But that relies on the legislation getting through both Houses in time – and that would see the laws changed very quickly indeed.

This is the next date of a European Council meeting with a summit planned in Brussels. The EU27 will review the progress the UK has made toward getting a deal.

Pressure from France’s Emmanuel Macron led to this review date being added. He has been reluctant to implement a longer extension.

This is the date Mrs May has offered on a number of occasions. It is significant because it is before the new MEPs are likely to sit in the European Parliament on 2 July.

But the EU has consistently vetoed this date. They are not happy with it because of its proximity to the European Parliament’s formation.

Pulling out that soon would mean running elections without having the new MEPs sit in the new parliament, or allowing the UK to not participate in the polls, despite still being a member of the bloc.

However, under a “flextension”, this date is still perfectly possible, because the UK could pull out having passed a new deal on 29 June.

The new members of the European Parliament take their seats.

Parliament in the UK does not sit from mid-July until early September, a period known as summer recess. Last year, the House did not formally sit between 20 July and 4 September.

This means there is a lot less work likely to be done and there could be delays either to getting legislation through or to coming up with a deal.

September marks party conference season, with Labour holding its conference on 21 September in Brighton, and the Conservatives travelling to Manchester on 29 September.

Iain Duncan Smith, former leader of the Conservatives, called on Mrs May to be out of position by this date. Certainly those jostling to replace her may be hoping to set out their stalls to the party faithful at conference.

But Mrs May promised she would leave the helm when a deal gets through parliament. As this date is before the new Brexit deadline, it could mean the dancing queen returning to the stage for another conference.

Trick or treat? This is the next date for leaving the EU with or without a deal.

It is also the final day in office for the European Commission President Jean-Claude Juncker.

Should the country be ready to leave on this date, it is unlikely the UK MEPs will have had any hand in selecting his successor.

This date marks one year since Mrs May survived a confidence vote on her leadership of the Conservative Party.

Mrs May faced down opposition to her leadership, promising she would go before another election.

She then promised she would leave before the next stage of Brexit negotiations, seeing her withdrawal agreement go through and passing over to someone else to allow future talks on the political declaration to go ahead.

But with no end date in sight for getting her deal through, there could well be another chance for MPs to revolt.

She is safe for one year under Conservative Party rules, so no contest could be held before this date.

There is word that EU leaders have been concerned about offering her an extension beyond this date because of that threat over her future.