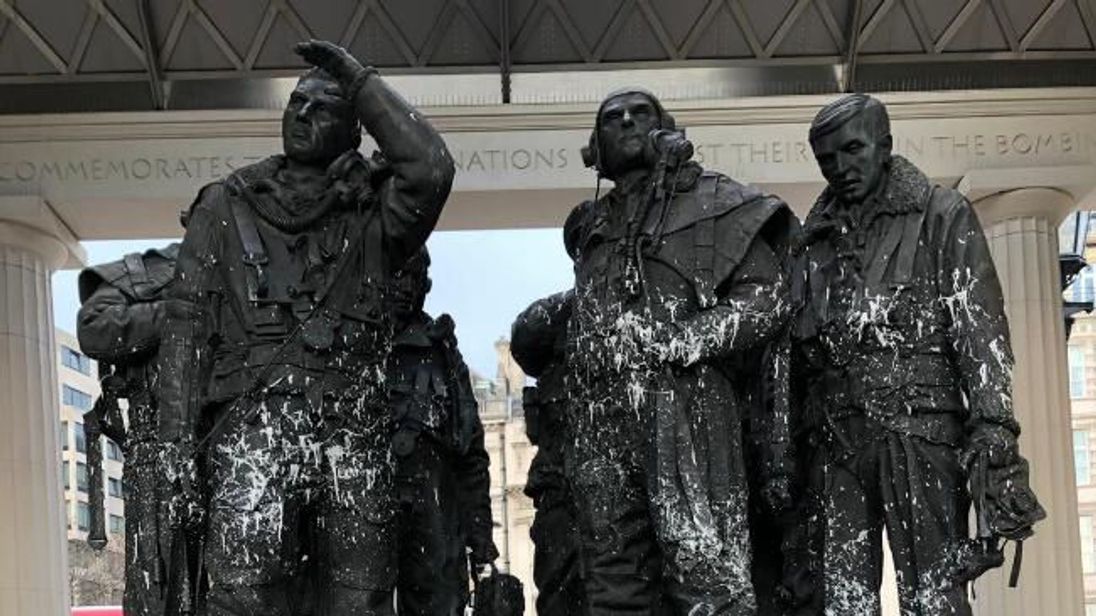 Vandals have thrown paint over the RAF Bomber Command Memorial – the tribute to more than 55,000 personnel who died in its service during the Second World War.

The imposing statue of aircrew surrounded by several poppy wreaths was left splattered with white paint after the fourth attack in six years.

“This is the worst example of vandalism we have seen at the memorial and it is utterly heartbreaking to see the memory of all those brave airmen disrespected in this way,” said David Murray, head of the RAF Benevolent Fund charity.

“This despicable act took just moments but will take considerable time and resources to put right.”

The memorial is in London’s Green Park and was unveiled by the Queen in 2012, but has been repeatedly vandalised.

We are shocked and saddened to see that the Bomber Command Memorial has once again become a target for vandals, for the 4th time in 6 years. Paint has been splashed across the entire Memorial. Work to repair the damage has begun immediately. Read more: https://t.co/0nAEZwYGDf pic.twitter.com/wPJa0RpnZ4

“Islam” was sprayed on it in 2013 and shortly after someone else daubed it with “Lee Rigby’s killer should hang”. In 2017, the word “Jesus” was written in large letters across the memorial’s stone pillars.

CCTV of the area has been passed to the police in the hope of catching those responsible.

Clean-up work has already begun but is likely to cost thousands of pounds and will divert cash away from the charity’s work of supporting serving and retired RAF personnel.

“Like the remarkable men who the memorial commemorates, we will not rest until we have finished the job,” said Mr Murray.

Bomber Command’s young crews were often in their teens and flew treacherous night-time missions over Germany.

They played a vital role in attacking the Nazi war machine by taking out factories and crippling railways and roads ahead of D-Day.

Family living on ‘ghost estate’ after dozens of homes demolished