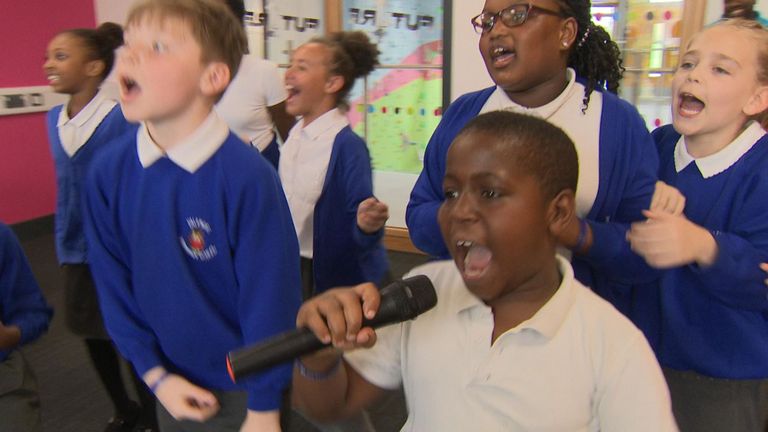 Sky News visited Future, the OnSide Youth Zone in Barking and Dagenham, ahead of Thursday when the Duke of Sussex will open the facility.

The team behind the centre want to tackle the capital’s knife crime and gang problems by providing activities and support services to keep kids off the streets. Other Youth Zones will open in Croydon and Barnet this year.

There are nine other centres in the north of the England, from Manchester to Wolverhampton.

Ms Morley said a few months after a Youth Zone opened in Birkenhead, the nearby gang had “dwindled down to only a fifth of its original size and the rest of the young people who were on the periphery of that gang were in the Youth Zone involved in music, arts, dance and drama”.

The centres are open when schools are closed and offer around 40 activities and support services, with an ethos of providing “somewhere to go, something to do and someone to talk to”.

Paula Rodriguez, 16, lives near the new Barnet Youth Zone and told Sky News: “It’s got to a point where every second that a young person spends on the streets is that one second that somebody could just come and take their life or put them in hospital.

“There isn’t a definite reason as to why [gang violence and knife crime] is happening… or a definite thing that we can do to stop it but we can definitely try other things because clearly what we’ve been trying for a long time is not working.”

She said the Youth Zones make a difference because “for some people it’s like a second home because not a lot of kids have that sort of environment at home, where you know they have people looking out for them”.

The centres are not cheap to run – around £6m each at a time when local authorities have dramatically cut youth spending – but local businesses, philanthropists, the community and local authorities all chip in.

Young people have access to the best computers or gym equipment based on the belief that if young people are trusted and invested in, their confidence is boosted and their behaviour improved.

Last week Prince Harry spoke about the dangers of social media and how important it is for young people to have places to go.

YMCA chief executive Denise Hatton said: “He is somebody that can raise the profile of the issues and hopefully, as he talked about today, what we need to do is work together to just open up purse strings wherever we can.

“But also I think he really relates to the young people.”

When the prince visits the Youth Zone on Thursday he will also meet members of Barking and Dagenham Youth Forum and Youth Zone members who will talk about their experiences of knife crime.