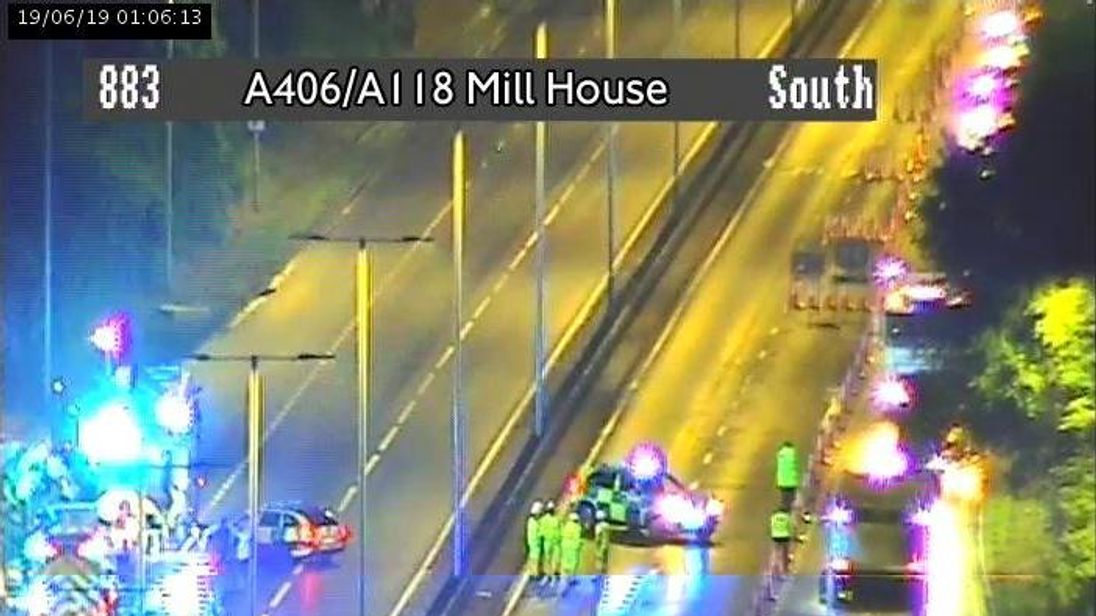 Investigators are trying to identify a man killed and another left critical when a tent was set on fire in east London.

The deceased victim, who was in his 40s, suffered “almost 100% burns”, while the second man of a similar age was critically injured after the tarpaulin they were living under in east London went up in flames.

The surviving victim remains in an induced coma in hospital.

The Metropolitan Police is appealing for help in identifying the victims, who may originally have been from Romania.

Two men have been charged with murder, attempted murder and arson with intent to endanger life in connection with the blaze.

“This was a horrific incident which has caused one man to lose his life, and may claim the life of another,” Detective Chief Inspector Paul Considine said.

Police, paramedics and firefighters were called to reports of a blaze on scrubland next to the southbound carriageway of the A406 at around 11.45pm on Tuesday 18 June.

Part of the road was closed as emergency services dealt with the fire.

Detectives have been told the men may have worked as casual labourers in east London and have appealed for anyone who may have employed them to come forward.

DCI Considine said: “We really need to hear from anyone who knows or think they may know either or both of these men to help us with our investigation.

“I am particularly appealing to the east European community to come forward, as we think both men may be of Romanian origin.

“We believe that the deceased man may have been called Majea or Manea, but we do not know if this is a first name, surname or even a correct name, while the second man in hospital in Essex might be called Pedro, or Petra, but again we can’t be sure this is right.”

Anyone with dashcam footage recorded in the area at the time has also been asked to come forward.

One of the suspects, a 37-year-old man, is due to appear before Barkingside Magistrates’ Court on Saturday, while a 51-year-old suspect appeared at the same court on Friday.

Elizabeth Warren bought a full-page ad in a GOP billionaire’s newspaper so she could taunt him about the $2.3 billion he’d pay under year one of her wealth tax

Elizabeth Warren bought a full-page ad in a GOP billionaire’s newspaper so she could taunt him about the $2.3 billion he’d pay under year one of her wealth tax