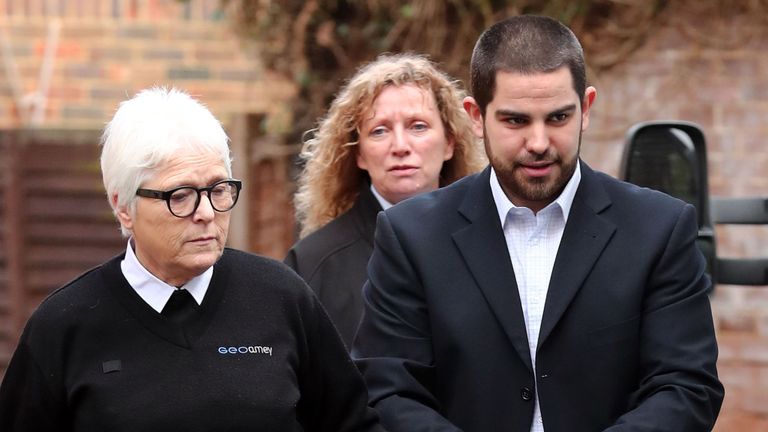 Stalking and harassment offences are not being investigated by police consistently or effectively, a report has found.

A series of recommendations have been made on how Sussex Police can improve – a force that records the second-highest number of stalking offences in England and Wales.

Her Majesty’s Inspectorate of Constabulary and Fire & Rescue Services (HMICFRS) published its findings after an inquiry was ordered following the murder of 19-year-old Shana Grice.

It also called on the National Police Chiefs’ Council (NPCC) to ensure forces around the country make improvements.

In the last two years, reports of stalking and harassment have increased by more than 40% across England and Wales, HMICFRS said.

An average of two women are killed by a former or current partner every week across the country and stalking often escalates to murder, according to charities and campaigners.

In the report, inspectors said improvements had been made but more needed to be done.

The report raised concerns that there was no single definition for stalking adopted by police forces and government departments, adding: “As a result, police forces are not consistently identifying stalking, and are not protecting victims as a result.”

HMICFRS concluded that police forces are not using powers under stalking laws to search perpetrators’ homes – meaning stalking investigations are “not as thorough as they could be”.

There were also concerns over cases where victims were targeted online.

The report said: “We are concerned that Sussex Police’s response to victims of stalking or harassment is not always as effective and consistent as it could be.

“This is because not all officers have received enhanced stalking training.”

A training programme introduced after Miss Grice’s murder to help staff better understand and identify stalking was “never fully completed” and most investigating officers had not received any training, according to the findings.

Not enough victims are being referred to specialised support services, the report added.

He pursued Miss Grice by fitting a tracker to her car, stole a house key to sneak into her room while she slept, and loitered outside her house. It later emerged 13 other women had reported him to police for stalking.

Singer Lily Allen, who was stalked for seven years, branded the case as an example of police “continuing to ignore” warning signs.

The force apologised for the way it handled the case – and on Tuesday, confirmed some officers would be facing disciplinary action over the death after the Independent of Police Conduct (IOPC) investigated 14 officers and staff.

The IOPC also said a police call handler from the force had been given “management advice” for failing to record Michelle Savage’s reports of escalating violence by her ex-husband Craig in March last year, who shot her dead eight days later.

Sussex Police and Crime Commissioner Katy Bourne, who commissioned the report, said she hoped it would improve the force’s response “dramatically” and scrutinise how other bodies were handling stalking.

It is the first time a commissioner has ordered HMICFRS to carry out such a report.

Inspector Wendy Williams said she was “encouraged” by the commitment from the force so far, but added: “Despite some cases being dealt with well, there were still more that could have been handled better.”

Stalking and harassment is more common in Sussex than the national average, the report said. About 9% of crime in the county is harassment and 2% is stalking, compared with 2% and 0.1% nationally.

The force records the second-highest number of stalking offences in England and Wales, with a 98% increase in recorded crimes in the 12 months to 30 September, the report said.

During this time the force recorded 1,228 stalking offences, up from 621 in the previous 12 months, according to the findings.

The force was given three months to make improvements which include overhauling the risk assessment process, reminding officers of warrant powers under stalking laws and checking these are being used, making sure online crimes are being recorded correctly, and reviewing and improving training to make sure it is adequate.

The NPCC has been given up to six months to adopt a series of recommendations, including setting a definition of stalking to be used by all forces, ensuring crimes are properly recorded, reviewing the use of injunctions to protect harassment victims, and encouraging officers to make use of powers under stalking laws.

Sussex Police Assistant Chief Constable Nick May said: “The report acknowledges we have significantly improved our understanding of what stalking and harassment is, and what our response should be. It also sets out where there is even more work to do and we accept this.”

He said officers were committed to continuing to protect victims and bring perpetrators to justice and although the force’s percentage average for charging perpetrators had “decreased”, there were “numerous reasons” why victims may not support a prosecution.