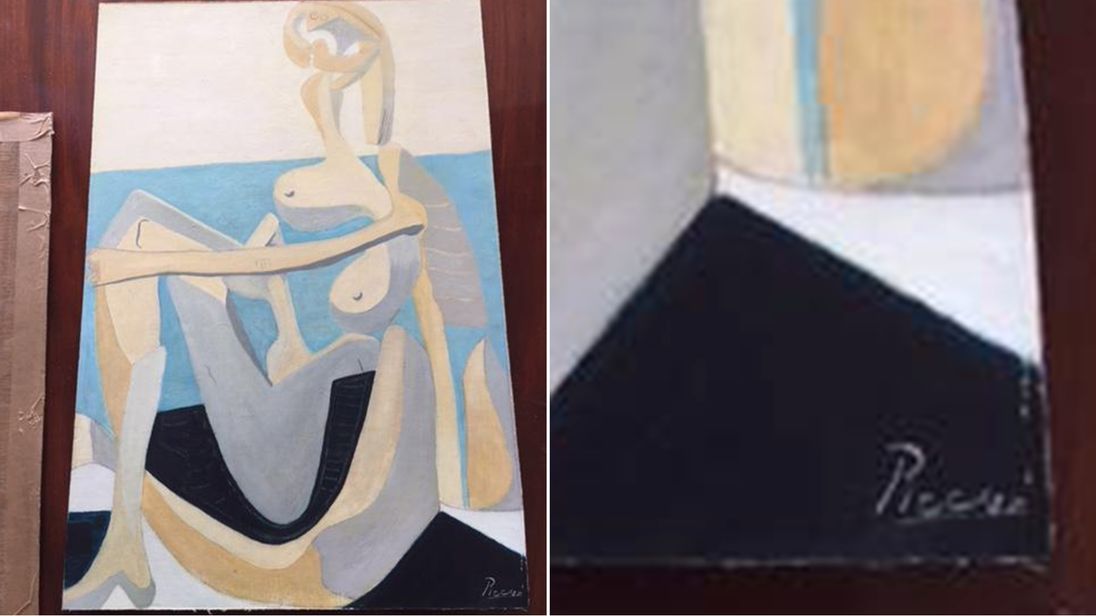 A Pablo Picasso painting bought for £230 at a car boot sale is genuine, experts have told Sky News.

The piece, which closely resembles one of the legendary Spaniard’s works – 1930’s Seated Bather – was found at a sale by antiques fanatic Philip Stapleton.

Mr Stapleton, 52, from Crawley, thought it was a good fake but was curious about the words “Picasso Col­lec­tion” inscribed on the painting and, six months after buying it, took it to be authenticated by an expert.

He took it to Rosie May, a picture researcher and general manager of Brighton and Hove Auction Rooms, who has no doubt about its authenticity.

She told Sky News: “We fully believe that it’s genuine. There are too many pieces of evidence that point to it being an absolute real Picasso.

“We think it was a small, preparatory work that he gifted to his friend Roland Penrose.”

Ms May admits she dismissed it as a copy at first, but was “intrigued” by the signature and a statement on the back saying “Roland Penrose Estate”.

Another message linked the painting to the artists’ nephew, Javier Vilato, with whom he was very close and who had “a lot of Picasso’s work”.

Ms May said, there is another message, in pencil, reading “To Roland” and signed “Picasso” with the date.

She said: “There is no reason why a forger would put that message on the inside of a painting. If they did they would make it legible. It’s very faint, but it’s very clearly a message from one friend to another.

“There is too much evidence stacking up to think that it’s not a Picasso.”

Mr Stapleton has said he feels like a “rabbit in the headlights” since hearing the news. “It’s a very strange feeling. I feel kind of numb,” he added.

The painting is set to be sold at the auction house next month.